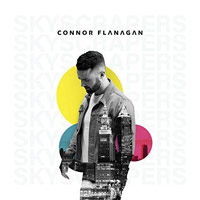 
When NF first came out with the song "I'll Keep On" it was an overnight sensation for the mainstream CCM industry that has largely moved away from any hip-hop influence. Clearly, this was a style of music and emotional message that resonated with Christians young and old. Emerging from the underground, Connor Flanagan brings his own mixture of hip-hop and worship. Though there are some definite comparisons to NF (specifically on "Anchor" and "Into The Wild") and even some Social Club Misfits (second verse of "Into The Wild"), Connor Flanagan does plenty to create his own vibe. With a catchy, gospel-preaching chorus, verses that talk about the struggles of daily life, and a synthesized horn hook, "Make A Way" kicks off the eight-track project on an energetic and anthemic note. The title track, "Skyscrapers," fleshes out the theme of the record with the word "skyscrapers" representing feeling overwhelmed chasing your dreams over what is possibly the most commercially viable song on the record. "Anchor" has a flow and musical backdrop in the verses that is reminiscent of NF's style, with haunting keys and strings paired with vulnerable lyrics. There is a bit of a musical theme on "Anchor" with the string melody sounding similar to the synths on "Make A Way." "Uber Pastor" follows, dividing the album in half as an odd interlude about how God is good. On the back half of the tracklist, "Landslide" is the most danceable track present and is nicely contrasted with an acoustic version at the end of the album. "Into the Wild" and "My Confidence" close out the studio portion of this album with more singable choruses, emotive rapped verses, and a focus on strength through Jesus. Straddling the line between EP and LP, Connor Flanagan's Skyscrapers is a solid offering that is fun and energetic, but also has substance. While Skyscrapers does seem to be slightly geared towards youth group crowds, anyone who enjoys casual hip-hop with pop hooks will find a lot to appreciate here.
- Review date: 11/15/18, written by Christopher Smith of Jesusfreakhideout.com