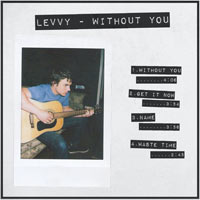 Levvy
Without You (Acoustic EP)


Indie rock band Levvy left a strong impression with 2019's full band, four-song introduction, titled Better Than I Was Before You. Returning here in 2020, they offer a stripped-down acoustic set as a fan "gap filler" of what's to come when it's safe to gather in the studio and perform live shows again. Among the four tracks is a take on the previously released standout track, "Waste Time," which shows off the band's diversity, and further whets the appetite of this reviewer. With this new EP appropriately titled Without You (Acoustic EP), listeners get a raw "guy, guitar, and microphone" treatment showing off the great potential of the songs. While that may be right up the alley of some, it might be hard to imagine the possibilities for others who prefer a more fleshed-out version of music with studio polish and full instrumentation. Either way, the biggest new standout track is the weighty "Get it Now," which features topnotch lyrics from the chorus, like "I think I get it now, I'm not alone/I think I'm finding out, I never was/You broke yourself to save, the one who ran away/I think I get it now, I think I get it now." It's achingly honest lyrics like these and others on the two other new tunes, "Without You" and "Name," that has me excited to see how these songs ultimately take shape. For now, these offerings will have to hold over fans as they wait for the full band treatment. Here's hoping the wait isn't too long as Levvy is a band to continue to keep an ear out for with future projects.
- Review date: 8/23/20, written by Josh Balogh of Jesusfreakhideout.com