BarlowGirl has become much more than a trio of sisters in a pop/rock band. With the release of their third record, How Can We Be Silent, the girls unite to rally a generation to live out their faith boldly. Alyssa and Becca Barlow recently took a few moments to answer some questions for Jesusfreakhideout.com...
This interview took place on: July 26, 2007

BarlowGirl: We really want people to grasp the calling that God has for their lives. In the world right now, darkness speaks so loudly and we as Christians have sort of convinced ourselves that we'll be more effective by being quiet and "fitting in." But, what the world really needs now is Christians who aren't afraid to be bold; to speak up for the truth. And you don't need a microphone or a platform to do that-you can start speaking out to the world around you right now.

BG: We actually do things kind of backwards when it comes to preparing for a new album. We fast from music because we've felt that God wants us to come to HIM for inspiration, rather than copying elements of other music we're listening to. So we're really most inspired by listening to teachings and worship.

BG: We really challenged ourselves musically in the production of this album. We talked with Otto (our producer) and told him about different styles we wanted to try and new instruments we wanted to play. It was a great learning experience.

BG: Actually, we ALL really like "Million Voices" and "One More Round!"

BG: Definitely. We'll be out on the road with TobyMac this fall, playing a lot of new songs from our album.

BG: So many times, people will say to us, "Thank you for speaking to our girls," and we've often thought, "But this message of purity isn't just for the girls... it's just as important for the guys to hear!" The enemy really tries to target guys with media and images these days, and we wanted to specifically write a song for guys that said, "Take a stand and get serious about this issue!"

BG: You know, we thought that we'd get sick of playing the same songs night after night, but we haven't! The thing that always keeps it fresh is the audience. When you hear stories of people that just heard a song for the first time, or when we get to see people getting the message for the first time, it makes it all worth while and seems new each time.

BG: We all love "Million Voices" right now because it's a really great rock song to play. But "I Need You to Love Me" is still a great worship moment every night.

BG: We've honestly never considered that before! It was difficult starting out as an all-girl band because most people said we'd need guys to play the instruments, or a band, etc... but we've just been obedient to God's calling and He's completely paved the way for us to do this.

BG: We work through creative differences, personality differences, everything, the same way. Through prayer and communication, we always try to be in unity.

BG: Business is obviously a part of our day-to-day lives, but we're slowly learning to be persistent in taking family time that has nothing to do with music.

BG: We love to be at home on our property, hanging out with our family, sitting outside reading and just walking around our property.

BG: Never! Right now, God's blessing seems to be there when the 3 of us are just together in unity.

BG: Well, we don't know much about cartoons, but we each have a specific Disney princess personality. :) Becca would be Mulan, Lauren would be Ariel (from The Little Mermaid) and Alyssa would be Belle (from Beauty & The Beast).

BG: Any books on revival or modern-day martyrdom are inspiring to us. We've been reading books about the Azusa Street and Welsh revivals lately and they are amazing.

BarlowGirl's latest album, How Can We Be Silent is in stores NOW! 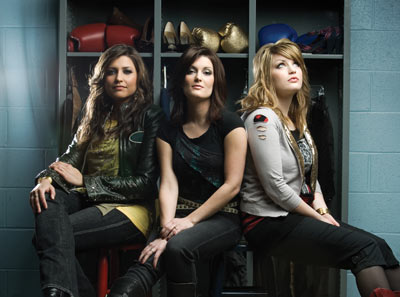