Three years after the demise of Sixpence None The Richer, the angelic vocals of Leigh Nash return on her flagship solo project Blue On Blue. Leigh paused from her busy schedule promoting the release to answer a few questions for Jesusfreakhideout.com.
This interview took place on: August 29, 2006

Leigh Nash: I was pretty sure I'd still want to make music in some capacity. I just wanted to give it some space of course and focus on my new baby. After about 9 months, I felt inspired and ready to start working again. I started slow and really enjoyed the process.

Leigh: Pierre is an amazing person and producer. It was an honor to work with him! He did a beautiful job! Canada was beautiful too. We loved the land up there and rented a house by a lake for the 2 months I was working. It was wonderful!

He was really happy with the songs as they were for the most part, so there was little restructuring... he did however so tastefully layer the instruments and was careful that everything was tasteful and not overdone.

Leigh: Life inspires me all the time. The good and the bad!

Leigh: The love I feel for him has inspired many songs... I can't get over the emotions that parenthood invokes!

Leigh: That was the first song that I wrote with Pierre. I had never met him before and flew up with my mother and son two years ago this month. I instantly liked him and it felt easy working with him. I expected to be intimidated, but was not at all. The song came about over a couple of days of working when the inspiration hit us. He plays the piano beautifully and when he began to play that melody, we both felt very excited about the song.

Leigh: "Nervous in the Light of Dawn" was written by myself, Billy Steinburg, Rick Nowles and Matt Slocum. That's a lot of people on one song I know! This song was written when the band was still together, I wanted it to go on Divine Discontent but was fought on that. So when it came time to write I remembered this song immediately and claimed it! Billy Steinburg wrote the lyrics. I think they're stunning!

Leigh: Blue on Blue was what I came up with after sitting at the computer and writing a stream of consciousness. When I was done I looked at what I had written and thought "Blue on Blue" sounded pretty!

Leigh: "Just A Little" because I wrote it about the first night I spent away from my son. He was one. It was very hard for me (as I'm sure it is for most mothers), so this song I feel describes how I felt very well. I'm glad Henry will have that song later and know what a sap I am for him!

Leigh: I grew up listening to country and this song definitely has a country sound, I loved it! I love singing with Dan too, so it was a win win situation! 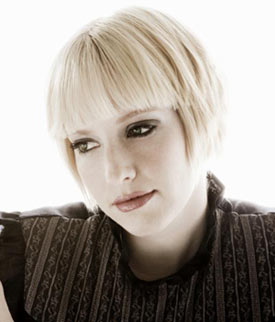