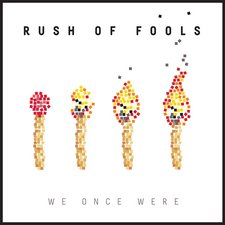 We Once Were
by Rush Of Fools

From beginning to end God You reign, You reign
Over time and space You stand but You remain sovereign over all

No one could have formed You
Although many hands have tried to
I was there
No one had to save You
You alone have stayed true,
I was there
Youre the one who opened up my eyes

From beginning to end God You reign, You reign
Over time and space you stand, but You remain
Sovereign over all the things I cant control
And all the dreams Ive tried to hold
And all the times Im losing hope
Youre never letting go

Behind the Song:
"The story of God, written by God. And it's all...about...HIM. Before existence existed, God existed. Yes, that should hurt your brain to think about. This world, as we know it, is the greatest love story ever written. On one hand, it's the only true love story written for creation, brought to life through creation. The lyric of this song might cause some discomfort for those who struggle with the idea that God controls the universe that He's made for His own pleasure and glory. But we write about this because we find it over and over and over in the Bible. God ordains things. He sustains things. He controls. He wills. He kills. He is mightier and more powerful than we like to think about, really. But the fear of the Lord is the beginning of knowledge (Proverbs 1:7). He is of Himself to be feared by His creation. The reason we can't stop singing about the sovereignty of God is because the more we try and understand it, the more aware we become of how He loves us in a way that goes beyond our ability to grasp. The lyric spawned out of a night in a hotel room and wanting to write in simplicity the heart of the love story of God. Creation is about His glory. Life is about His glory. Death is about His glory. EVERYTHING is really about His glory. These thoughts ought to be sung about by His bride. From the perspective of the record as a whole, this song in particular seems to be the one most fitting for the Church to be singing. May we find peace in the fact that 'over time and space' He stands and remains, 'sovereign over all.'" - Rush of Fools