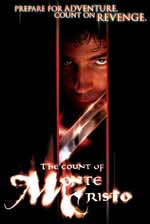 The Counte of Monte Cristo 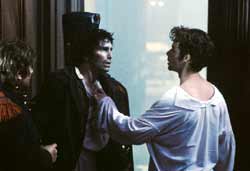 Edmond Dantes (Jim Caviezel) has everything going for him: he's engaged to a beautiful woman named Mercedes, he's about to become Captain of his own ship, and he has some really close companions. Well, at least he thought he did. When he's framed for treason and his own best friend Fernand Mondego (Guy Pearce) is involved in this conspiracy, Edmond is sent off to the island prison of Chateau D'If, a horrible and miserable dungeon meant for the most shameful of prisoners. When meeting a fellow inmate changes the course of his stay and manages to help him escape, he is lead to a treasure on the island of Monte Cristo. Now rich beyond anyone's wildest dreams, Edmond sets out for the one thing he has had on his mind during these many lost years: revenge.

The Count of Monte Cristo is not a new tale. Based on a famous book by Alexandre Dumas, the tale of betrayal and revenge has been told quite a few times on film and television through the 1900's. In 2002, the public is treated to a fresh new telling of the tale which appears to be faithful to the story and as intense and engaging as ever.

Jim Caviezel, who also starred in one of my favorites Frequency and was also in last year's Angel Eyes with Jennifer Lopez, stars in the lead role as Edmond Dantes, the innocent God-fearing young man who gets stabbed in the back by the closest of friends. This may seem as a surprising role for Caviezel but after seeing the film, I couldn't imagine another person in this role. He does an amazing, solid performance rounding out his character, making it easy to feel his pain at every angle. Guy Pearce, known for his role in L.A. Confidential, and starring in the lead of this year's The Time Machine remake, does an almost equally as extraordinary job as Edmond's friend-turned-enemy Fernand Mondego. Dagmara Dominczk does a great job as the love interest Mercedes. And the direction by Kevin Reynolds was perfect. He did an excellent job bringing this film to life and making it as wonderful as it was. The scenery shots are breathtaking and help make the film feel so realistic and alive. Awesome choice in filming locations. 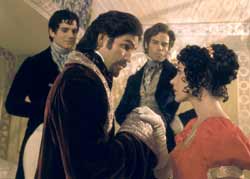 The film actually shows God in a positive light. At the film's beginning, Edmond has a firm belief and trust in God which unfortunately fades during his stay in prison. However, it is revealed in the later half of the film that God was merciful to Edmond and he appears to have a renewed faith in Him. What behavior was indeed objectionable that I didn't appreciate during the movie is that Edmond and Mercedes do not wait to be married to have sex, and we briefly see them on the beach at a distance passionately kissing on the ground (implying further actions). SPOILER WARNING (but has to deal with morality of the film): I was pretty surprised that Edmond chooses to sleep with a married woman later in the film and was disappointed the story writers and film makers included this. END OF SPOILER

Language is near non-existent. "For G-d's sakes" and "Oh my G-d" are used a couple times out of exclamation. Violence and blood is moderate. We briefly see some bloody scars on Edmond's back as he's whipped a couple times during his prison years. Later we see the non-bloody scars on his back. In the opening sequence, a man goes to cut a man's arm to see if he is really in a coma or not, and decides to cut a lot deeper. We don't see the blade go in, but we briefly see the small bloody wound on his arm. Also, we see people impaled by swords in two different instances. It looks as though there is a little bit of blood on the sword each time, but it isn't especially gory, although it will most likely bother some viewers. As far as sexual content, Ferdnand asks Mercedes to make love to him in a half-joking manner while she is engaged to Edmond. Also, Edmond apparently has sex with Mercedes twice during the film, both encounters are unseen, but strongly implied.

I really enjoyed this film a lot. Well done all around with my only complaints being the inclusion of adultery and some pretty violent scenes (but are crucial to the story). A nice start to a new year of films.

Sex/Nudity: While out on the beach, we see Edmond and Mercedes kissing with him on top of her with their head and shoulders visible from a distance. It is implied they have sex. In another scene, Edmond and Mercedes are in bed together after having had sex, but we don't see any of the actual encounter. Later we see Mercedes with just a bed sheet around her body.

Alcohol/Drugs: There is drinking in various scenes during the movie.

Blood/Gore: When Edmond and Fernand land on an island to find a doctor for their ship captain, the authorities there test the captain to see if he is in a coma or not by stabbing his arm with a knife. After doing so, we briefly see blood on his arm where he was stabbed. Edmond's clothing has bloodstains on it from being whipped on his back numerous times. After being whipped yet another time, we see for a moment bloody slashes on his back. Edmond and Abbe cook a rat they catch in their cell. Edmond has a lot of scars across his back from all the times he was whipped. In a brief duel, we see a man impale another with his sword, but nothing especially graphic is seen (there may have been a little bit of blood on the sword). There is blood on a man's shirt during another duel. In another duel, we see a man with a sword sticking through him with some blood on his mouth.

Violence: There is quite a bit of violence with sword play (including people being cut, with several of those not being shown), and several deaths occur via these encounters, etc. Disclaimer: All reviews are based solely on the opinions of the reviewer. Most reviews are rated on how the reviewer enjoyed the film overall, not exclusively on content. However, if the content really affects the reviewer's opinion and experience of the film, it will definitely affect the reviewer's overall rating.