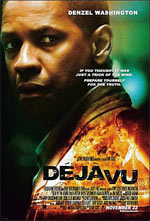 - for intense sequences of violence and terror, disturbing images and some sensuality. 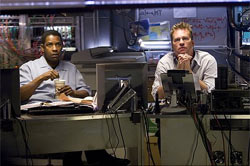 In the captivating new action-thriller from producer Jerry Bruckheimer and director Tony Scott, written by Bill Marsilii & Terry Rossio, it is déjà vu that unexpectedly guides ATF agent Doug Carlin (Denzel Washington) through an investigation into a shattering crime. Called in to recover evidence after a bomb sets off a cataclysmic explosion on a New Orleans Ferry, Carlin is about to discover that what most people believe is only in their heads is actually something far more powerful - and will lead him on a mind-bending race to save hundreds of innocent people. As Carlin's investigation deepens, it not only probes through the very fabric of space and time, but becomes an innovative love story that unfolds in reverse, when Carlin discovers his puzzling emotional connection to a woman whose past holds the key to stopping a catastrophe that could destroy their future. In the split second of a glance, without words yet with complete trust, Carlin takes one chance to change everything. (from MovieWeb.com)

Time travel is a tricky subject considering it's entirely fantasy. While it often makes for imaginative filmmaking and storytelling, there are just those who insist on rationalizing it or disputing the subject in the way they insist it should be (aka makes the most sense to them). Deja Vu is a dramatic action thriller that uses time travel as a set piece for the film's premise in a way that leaves plenty of questions to be answered, but at the same time seems well thought out and considered. 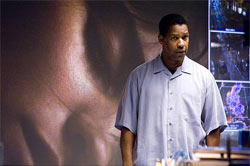 Deja Vu teams Denzel Washington up with director Tony Scott once again, who directed Washington in the vicious action thriller Man On Fire a few years ago. Washington is playing a completely different character here. As an ATF agent assigned to the scene of a terrorist bombing in New Orleans, Washington is more your everyday man here as Doug Carlin. This time, he isn't a man with a complex or shady past. Carlin is an intelligent investigator without seeming cliche, and tough without coming off as a Brillo pad personified. One thing that is missing about Carlin, however, is more details on his past as we just kind of get to know who he is through how he is handling present situations.

But Deja Vu is more than meets the eye. At times it seems to delve into the examination of fate, predestination, divine intervention, and the like, but ultimately seems to try to stick to entertaining rather than delivering a full-course dinner. But while it has a tendency to be inconsistent or, in other words, incomplete in its development of such themes, it makes for a deeper action thriller than your typical "blow 'em up and save the girl" kind of action film. In fact, when the movie does plop down in the seat of an action film (i.e. a chase scene across time on a bridge during heavy traffic), it feels a bit out of place to find cars spinning in the air and flying towards the screen (despite looking cool). The science of the time travel seems to have been given the greatest consideration as the flick spends the most time explaining its possibility above all other avenues the story touches on. The least, however, is predestination and divine intervention as it is addressed by the film's villain but not fully realized.

And the film's antihero is played by one that may come as a bit of a surprise to some (especially the readers of this particular website). Jim Caviezel, an actor who has become one of my favorites since first seeing him in Frequency in 2000, plays Carroll Oerstadt, a madman who's sort of a patriot and religious fanatic -- basically a stark contrast to his role of Jesus in The Passion Of The Christ. Caviezel is excellent as Oerstadt, but seeing the things this psycho killer does in this film is rather shocking for someone like Caviezel. But this isn't exactly the first time Jim has played a maniac. High Crimes also found Caviezel tipping the sanity scales, although it was handled differently (more as a "twist," which was contrived and forced... although it helps make his role here more believable). But Oerstadt brings up the topics of destiny and divine intervention which help carry a subtle theme about God throughout Deja Vu. From Paula Patton's central character Claire Kuchever saying grace aloud while eating alone, to fliers for a Baptist church hanging in her apartment, to a character telling another he believes in God despite often keeping it quiet, to an importance being put on the idea of divine intervention - there's a spiritual tone to Deja Vu that is worthy of post-viewing conversation. 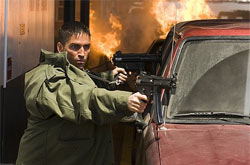 But it's the actual viewing that may not happen given a closer look at content. You're likely to get the vibe while watching Deja Vu that there may have been an original target for an R rating when the film was being made. The thematic elements of a ferry boat explosion killing over 500 people is heavy enough, but we're exposed to a prolonged view of a dead body on a morgue table that is covered in burns and has their fingers severed from one hand. It's a long enough scene to make the squeamish squirm a bit, feeling longer than it should have been (and needs to be). Aside from that, there's quite a bit of scenes with people getting shot, as well as a brief, slightly distant shot of a person being burned (at nighttime), and some views of a person's bullet wound on the skin. Finally, while characters are watching surveillance of a woman alone in her apartment, we see many views of her in just her underwear, as well as a brief shot of her naked in the shower from different angles (and dimly lit). All of it adds up for a grittier presentation, continuing to push the rating envelope. Language is surprisly the film's smallest problem, despite still offering a handful of colorful words and phrases.

While Deja Vu may be too hokey for those who enjoy cerebral films and too much of a thinker for those who like the simpler action films, the thematic elements of changing history to save lives and the question of who's in control of time (We are? Or God is? Or both?) leave plenty to talk about and consider. And Scott & Co. do a fine job leaving the audience guessing about how the story will end up until its final scenes.

Overall, Deja Vu is a well-acted, creative time travel film that is sadly held back by some grittier content. While it's a great thriller, the subject matter is heavy while the terrorist activities of the film's antagonist is often disturbing to say the least. Definitely not a light film, and definitely not one for families or younger viewers. It's rough enough that a future "Director's Cut" or "Unrated Version" released to DVD wouldn't surprise me in the least.

Sex/Nudity: We see several shots of Claire in just her bra and underwear in a few scenes; There is a brief shot of the top of Claire's bare butt while she is in the shower and a dimly lit shot of her bare chest as she's closing the shower curtain; We see a man's butt "crack" sticking out of the top of his pants as he's bending over; While talking to Doug about the frailty of life, Agent Pryzwarra suggests he goes home and "jumps on" (aka sleeps with) whoever he has at home (and Doug replies that there's no one); Oerstadt tells Doug he better have "divine intervention" cause he's going to need it, to which Doug sarcastically tells him he better have KY because he's going to need it (a reference to going to prison, where he hopes to send Oerstadt)

Alcohol/Drugs: None (Although Denny jokes that he "picked the wrong week to quit smoking hash")

Blood/Gore: The aftermath of a ferry boat explosion includes several views of dead bodies and some looking burned on site and on TV; There is a dead body on a morgue table that shows scarred burns on various parts of their body, some bloody marks on their face, and that four fingers have been cut off of their right hand; At Claire's apartment, Doug finds bloody rags and cotton balls as well as some blood on the floor in the bathroom; Oerstadt shoots a man and takes him back to his place where he douses him with a flammable liquid and shoots him again (to make sure he's dead) before setting him on fire. We then see Doug lift up a dock floor board to find an alligator tugging at the arm of a dead body underwater (several days after the murder); Oerstadt has Claire tied up with a covering over her head as he pours a flammable substance on her to burn her alive. She scrapes his face, causing bloody scratches on his face and he punches her and then grabs shears to remove the fingers on her hand that have his blood on them (but he doesn't get to finish the act); Doug is shot in the shoulder and we see blood on his clothing; Claire has some bloody scrapes on her face; Doug removes his shirt and we see the bloody bullet wound on his shoulder on both sides and him wiping away blood (and other views of blood-covered gauzes and rages); Oerstadt shoots a ferry boat operator a few times and we see briefly see the bullet wounds on the victim.

Violence: Lots of action violence (especially mentioned above under Blood/Gore), but we see the massive explosion of a ferry boat that also shows bodies on fire as they are thrown through the air and cars and people landing in the water; Doug causes serious car accidents on the freeway as he chases Oerstadt through time; As mentioned above, we're shown Claire as Oerstadt attempts to burn her alive; Oerstadt sets a man on fire after shooting him to death; A man shoots several people with a handgun and a machine gun; A man runs an ambulance through a building and is shot before the whole building explodes; A man is pinned between two cars and is then shot to death; etc... Disclaimer: All reviews are based solely on the opinions of the reviewer. Most reviews are rated on how the reviewer enjoyed the film overall, not exclusively on content. However, if the content really affects the reviewer's opinion and experience of the film, it will definitely affect the reviewer's overall rating.