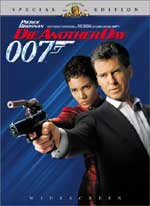 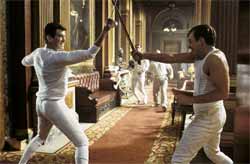 From Hong Kong to Cuba to London, British secret agent James Bond (Pierce Brosnan) circles the world in his quest to unmask a traitor and prevent a war of catastrophic proportions. On his way he crosses paths with Jinx (Halle Berry) and Miranda Frost (Rosamund Pike), who will play vital roles in his latest adventure. Hot on the trail of deadly megalomaniac Gustav Graves (Toby Stephens) and his ruthless right-hand man Zao (Rick Yune), Bond travels to Iceland into the villain's lair: a palace built entirely of ice. There he experiences firsthand the power of a new hi-tech weapon. Ultimately it all leads to an explosive confrontation back in Korea where it all started.

James Bond movies are in their own league. One cannot view a Bond film and compare it to the likes of an Oscar winning film. Can't be done. What needs to be expected, naturally, are amazing stunts, cool gadgets, violent-yet-not-really-graphic action sequences, idealistically attractive women, an over-the-top villian (or two), and a handful of amusing but quite cheesey one-liners. Bond movies, although almost completely free of swearing, does not come without a price. Being the womanizer that he is (great role model, huh? --- yes, that's sarcasm!), Bond has slept with so many women in his movies it's a wonder he hasn't died of STD's by now instead of a bullet (perhaps that's why he's always so keen on getting into dangerous situations?). With that, enters James Bond film number 20: Die Another Day.

Die Another Day is actor Pierce Brosnan's fourth take on the famed James Bond character who was made most memorable by Sean Connery. Brosnan boarded the agent 007 train in 1995 with Goldeneye, continued in 1997 with Tomorrow Never Dies and in 1999's The World Is Not Enough. Each outting has improved over the last as each has featured a new director as well. This time around, 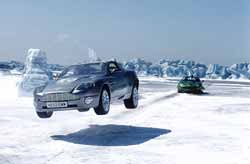 Bond updates further with the times as more CGI support is used to enhance stunts and the cars and gadgets get more hi-tech. Since filming World Is Not..., Desmond Llewelyn has died in a car accident and could not continue his long-time role (since 1964) as Q. Amazingly enough, his last performance set things up for his retirement and introduced the new Q played by the lovable John Cleese. Cleese fills the Q shoes nicely although the latest film fails to make any mention of the original Q. As far as the "Bond girls" go, Halle Berry does an adequate although not especially memorable job as Jinx while Rosamund Pike does a good job as the double 0 agent, Miranda Frost. The musical theme for the film, always peformed by a different artist per film, is composed by Madonna this time around with a poppy techno-laced theme that just painfully feels out of place. The villains of the film are great with Toby Stephens as the snarling yet charming Gustav Graves and Rick Yune as the creepy Zao.

Content was pretty bad with loads of violence from explosions to a non-graphic torture sequence to a slightly bloody sword duel. Language was mild with just a couple of cuss words while innuendo and double meanings ran rapid throughout the script. It's quite irritating that Bond can't stick to his job and has to bed at least 2 women per outting. Hours after Bond meets Jinx, the next scene finds them in bed together.
James Bond films would be more enjoyable in leaps and bounds if they just left this junk out. Due to stupid stuff like this, I can't recommend the film. However, if you've seen Bond films in the past, and are dying to see this one, your best bet is to wait for its DVD release and watch it on ClearPlay or something without all the junk. I was surprised to see such a young audience for such an "adult"-themed film. I suggest keeping the kids home from this one and catch it on TV or edited elsewhere.

Sex/Nudity: It's Bond. This means plenty of double meanings and innuendo as well as pointless and glorified sexual encounters. The opening credits features the signature silhouettes of nude women covered in designs to mask anything explicit. There is innuendo exchanged between Jinx and Bond when they first meet. We then see the two in bed at night as they're rolling around passionately kissing each other. We then see a blurred long shot from a distance of the two moving around under the covers. Some innuendo is made during a fencing duel. Some innuendo is made between Bond and Jinx and Miranda while at the ice palace. Frost and Bond decide to share a room and we see Frost remove her dress from behind, exposing her bare back as she undresses. They then get under the covers and it is implied they sleep together. Bond and Moneypenny begin to passionately kiss and they clear off her desk as he climbs on top of her on it. They're then interrupted as we learn none of it was real and we see a flustered Moneypenny buttoning up her shirt (nothing is seen). Finally, the camera enters a room where apparently Bond and Jinx are and innuendo is heavily implied as we hear a situation described that could be sexual before we actually see what the two are doing. We then see Jinx lying on the floor in her underwear, partially covered by a blanket with Bond lying next to her as he places a diamond in her belly button. They kiss and nothing else happens.

Alcohol/Drugs: Some drinking occurs during the film, including Bond's signature Vodka Martini.

Blood/Gore: A man's face is pretty bloody after an explosion. We later see that that man has diamonds permanently embedded in his face. Bond has a little bit of blood on his face. We briefly see two slightly bloody bullet holes in a doctor who's just been shot. Zao has a little bit of blood on his face after a fight. After an intense sword duel, Bond has some blood on his face and chest as Gustav has some on his face and shirt. We see a laser beam enter through the back of a man's head and out his open mouth, killing him. Later, it's implied, but not seen, that his hand is cut off with a laser to be used to unlock a fingerprint access pad. When a chandelier falls and kills a person, we see their blood color the water they're in. Jinx receives a slightly bloody cut across her stomach. Gustav has some blood on his face from a fight.

Violence: Lots of explosions, people shot, stabbed (in one instance, we ever so briefly see a knife hit a man in the throat), people fall out of an airplane to their death, a person is killed by falling into an airplane engine, etc Disclaimer: All reviews are based solely on the opinions of the reviewer. Most reviews are rated on how the reviewer enjoyed the film overall, not exclusively on content. However, if the content really affects the reviewer's opinion and experience of the film, it will definitely affect the reviewer's overall rating.