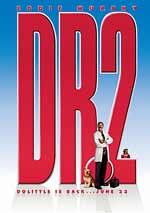 Dr. John Dolittle has become famous for his ability to talk to animals. From this, some forest animals go to him to seek his help in preventing the forest from being cut down. It is now upon Dolittle to prove that the forest is worth preserving. The test? Getting a circus bear to adapt to the habitat and mate with another wild bear to secure his endangered species. But will the company trying to level the forest take this? What do you think?

Ahhh, the sequel. I almost always am looking forward to seeing the sequel to an excellent movie. I was stoked to hear about The Mummy Returns, Rush Hour 2, and even interested in Jurassic Park 3, and of course, the movie in question, Dr. Dolittle 2. Why is it so hard to make a good sequel? Well, it wasn't always that way. Sequels in the "good ol' days" used to be more of a series than sequels. The writing and acting were better and sequels weren't formulated just because the ticket sales of the first one was so profitable. So am I leading into the fact that I think Dr. Dolittle 2 has suffered from sequelitis? Unfortunately... yes.

DR.2, as they're affectionately calling it, has a different director than the original, but the cast is the same for the most part. The rating has dropped from PG-13 from the 1998 original to PG in the sequel, which I think is wonderful, of course! But there is a slight problem... the audience the film is geared to has changed as well. It isn't necessarily a bad thing, but fans of the first film (or if you at least enjoyed it), and the older crowd may find this film a little too 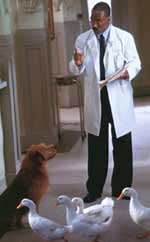 juvenile at times and some of the jokes almost embarrassing because how clear it is what audience they are trying to reach. Nonetheless, there still is a surprising amount of crude humor (but nothing so bad it should be PG-13 just because of it, but it isn't necessary to be included in the film), and there is some minor swearing as well.

Although I was disappointed in the overall outcome of the film (which on top of it all, is slow in parts), it still has its moments. The film's comedy picks up mainly once Archie the bear is introduced (voiced by Steve Zahn). There are times of complete and utter corniness (like 2 bears romping through the woods together to a song as you would normally see 2 human lovebirds doing in a romance film), but at other times it's enjoyable to watch Dolittle interact with the bear.

Not a complete loss, but could have been much better, I thought the film was alright. It should have and could have been a whole lot better. It's a decent comedy with some laughs if you want to see a movie on a rainy day and don't mind seeing something that isn't necessarily spectacular. With all that taken into consideration, I grant Dr. Dolittle 2 2 stars.

Sex/Nudity: There are some comments made that aren't too explicit or crude and probably would go over most kids' heads.

Alcohol/Drugs: A monkey drinks from a pouch and is often drunk. Some people drink wine or champagne during the film.

Blood/Gore: There's some bathroom humor including farting and dog's peeing to mark its territory (which we see). A man's face is covered in bee sting marks.

Violence: Some slapstick humor; we don't see either, but an alligator bites the Crocodile Hunter, and a man is stung by a swarm of bees. Disclaimer: All reviews are based solely on the opinions of the reviewer. Most reviews are rated on how the reviewer enjoyed the film overall, not exclusively on content. However, if the content really affects the reviewer's opinion and experience of the film, it will definitely affect the reviewer's overall rating.