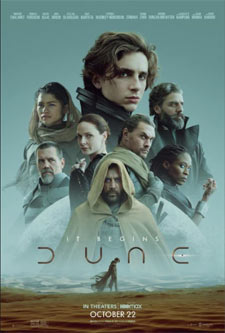 Feature adaptation of Frank Herbert's science fiction novel, about the son of a noble family entrusted with the protection of the most valuable asset and most vital element in the galaxy. (from IMDB)

The long-awaited new adaptation of the popular Frank Herbert sci-fi book series, Dune, has finally arrived, after the pandemic delayed its release almost a full year. This isn't the first time Dune has been adapted for the screen. A previous 1984 film has a cult following, while a couple TV movies were produced in 2000 and 2003. However, this time, visionary director Denis Villeneuve helms this new, ambitious sci-fi epic that aims to bring the story to life in a way never done before. The end result is a visually stunning and gorgeous film that feels like it's lacking the heart and passion to really make an impact. 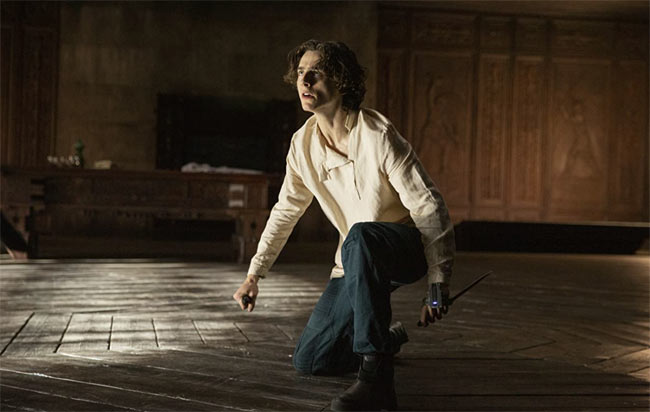 As a full disclaimer, so you know where I'm coming from as a reviewer here, I have never read the books or watched any of the previous visual adaptations, so I went into viewing this movie with a fresh slate. I had been looking forward to this film - especially because of the high profile cast, the immense buzz surrounding the movie, and its initial positive reviews. I was surprised to find myself feeling kind of lost while watching the story unfold. I didn't really grasp what many of the characters' motivations were, and I found it tough to keep track of which group of people was which, and why they were doing what they were doing. In the midst of all of this is popular young actor Timothée Chalamet, who plays Paul Atreides, the son of the Duke (played by Oscar Isaac), and who is discovering there's something special about himself that he doesn't quite understand yet. His mother, Lady Jessica Atreides, played by the lovely Rebecca Ferguson, is some kind of mystic, who has special abilities and wants to cultivate the abilities that her son also seems to possess. However, while Paul is trying to figure out what the weird, prophetic dreams he's having really mean, and where his place is among his people, the viewer is learning about several different groups of people, and who they are or what they represent. You have a creepy (and gross) villain called the Baron, talk of an Emperor that we never see, a race of people apparently indigenous to a new planet, and Paul's clan which is relocating to this planet. The main problem is, many of the people look or dress the same, and I feel like we've been dumped into this new world without clear explanation as to what exactly is going on. It seemed like everyone is fighting over spice and mining it (*shrug*) and it just doesn't seem like something necessarily worth fighting over and dying for.

Maybe it would help if I had previous knowledge of the books and the story, and maybe I just need to see it again now that I have a basic knowledge of the story, but I was surprised by how much I didn't find the story, world, or characters all that interesting or engaging. The score from composer Hans Zimmer is loud, booming, and kind of celestial, but its intense volume seemed to overpower the dialog and mood of any given scene. I thought director Denis Villeneuve's 2016 sci-fi drama Arrival was pretty brilliant, but he tends to bring some of the ambiguity of that story into this one, which could probably benefit from a more straight-forward story delivery. And with a 2-hour-and-35-minute runtime, the movie tends to drag in places when it shouldn't, and then rush by too fast during moments that need more time to develop. It creates this uneven push-and-pull with the story that makes the movie feel almost twice as long than it really is.

The saddest part to me is that it seemed like the most interesting and engaging characters to watch in the film had the least amount of screen time. To make matters worse, they don't survive this first half of the story, which makes me wonder what in the world we have to look forward to in Dune: Part 2. Where most movies like this would leave me excited for the story to continue, I was actually relieved when the movie ended and have no real interest in a Part 2 (although I almost inevitably will see it anyway). Again, let me reiterate that I wanted to like this movie, and I even expected to, but I found much of it exhausting and uninteresting, which ultimately left me disappointed.

When I watched 2019's Little Women for review purposes last year, I was left very unimpressed with Timothée Chalamet. I found his character to be one of the weakest things about that movie. But I also found myself entirely irritated by Florence Pugh's character in that film, and just like I had given Florence a second chance in this year's Black Widow, I was ready and willing to give Chalamet a second chance in Dune. However, while I ended up loving Pugh's performance in Black Widow, I only merely liked Chalamet in Dune. (Incidentally, this movie didn't help change my feelings about Zendaya either.) He was good, but he didn't do much to elevate the proceedings enough for it to not still feel pretty dull. He's such an integral part of the story, too, that I can't imagine how he'll be able to carry Dune: Part 2, whenever that should release.

The content for Dune is mostly related to violence. There is just a little bit of profanity, with one "S" word, 1 "h*ll," 1 "h*llhole," 2 "d*mn," 1 "My G-d," 1 "a" word, and 1 "G-d in heaven!" as an exclamation. There's also a weird scene where we first see the Baron and he's totally nude, but any explicit nudity is hidden underneath steam (still we kind of get brief partial views of his butt. The character is played by Stellan Skarsgård in a gigantic fat suit, so it technically isn't real nudity anyway, just FYI). However, there is a scene where Oscar Isaac's Duke is reclined in a chair totally naked, with a view of the side of his bare butt and any frontal nudity being blocked by the corner of a table. It's a short sequence, but it's very prominent. Otherwise, some pretty violent content is shown, with the worst being a man getting beheaded and we briefly see someone holding his decapitated head by the hair before he tosses it aside. The scene is framed so we don't see past the head's chin, so no gory detail is shown, but it is still quite intense. Some dreamlike sequences show a character with their hand dripping with blood, and another vision shows a room littered with bloody, dead bodies. Another vision shows piles of corpses on fire, and we also get another brief but obscured view of people being executed with their heads being cut off. Another sequence shows a man fighting off a room of soldiers with swords, and a character is stabbed and impaled by the blade. Overall, some of the action is very intense, so you may want to keep that in mind. 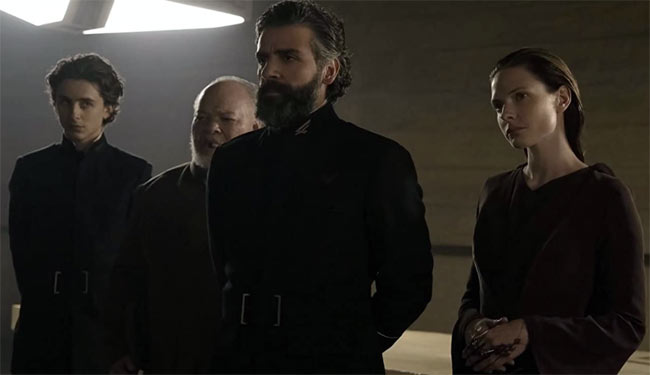 Maybe it's a movie best enjoyed by those with knowledge of the story, and maybe it's one that will get better with repeat viewings, but on my initial viewing, I was left feeling on the outside, not quite privy to the details of the Dune universe. Again, it's a visually stunning film, but visuals certainly aren't everything. Others seem to be loving the movie, but as for this reviewer, I couldn't wait for it to be over.

Sex/Nudity: When we first see the Baron, he's totally nude, but any explicit nudity is hidden underneath steam (still we get brief partial views of his butt; We see the Duke reclined in a chair totally naked, with a view of the side of his bare butt, but any frontal nudity being blocked by the corner of a table; A man comments to a woman with whom he has had a child with that he should have married them.

Alcohol/Drugs: The fictional spice in the story is said to have a hallucinogenic effect.

Blood/Gore: A vision shows a hand with a lot of blood dripping from it; A vision shows a room full of dead bodies with some blood on them and on the ground; We see a vision of two people fighting with blades and one of them dying with some blood on the ground; We see piles of burning dead bodies; Some characters have cuts on their faces; We see the blackened faces of people in a room who died from breathing in a toxin; A man is struck in the back with a dart, and there's a little blood around the wound; A man gets beheaded and we briefly see someone holding his decapitated head by the hair before he tosses it aside. The scene is framed so we don't see past the head's chin, so no gory detail is shown, but it is still quite intense; We also get another brief but obscured view of people being executed with their heads being cut off.

Violence: We see many scenes of battles - mostly with knives and swords - either in reality or in visions of the future; One such vision shows piles of burning bodies; A man fights off a room full of men with swords (with lots of stabbing and fighting); Paul is forced to put his hand inside a box that will cause him pain. A woman threatens to kill him with a needle to his neck if he takes his hand out. He then forces himself to endure the pain until the woman says he can stop (he then removes his hand and it looks perfectly fine); A buglike probe burns through a wall and hovers in front of a person's face. He then catches it and destroys it; We see some flying vehicles get destroyed; A building is attacked and many people are slaughtered; We see a vision of two people fighting with blades and one of them dying; An actual knife fight results in a person being stabbed and dying; A huge, menacing sandworm swallows some people; Some people flee a gigantic sandworm; A person commits suicide by biting down on a poison capsule that spills toxins into the air, killing everyone nearby; An army rushes into battle, presumably to their death; And other action/sci-fi violence. Disclaimer: All reviews are based solely on the opinions of the reviewer. Most reviews are rated on how the reviewer enjoyed the film overall, not exclusively on content. However, if the content really affects the reviewer's opinion and experience of the film, it will definitely affect the reviewer's overall rating.