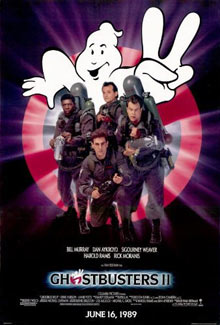 The discovery of a massive river of ectoplasm and a resurgence of spectral activity allows the staff of Ghostbusters to revive the business. (from IMDb)

With the long-awaited third installment into the original Ghostbusters film series, that began with the 1984 film, finally hitting theaters this year (after originally being slated for a summer 2020 debut, but getting sidelined thanks to a worldwide pandemic), I thought it would be timely to revisit part two of the story, 1989's Ghostbusters II.

As an 80's kid, I saw the original film on the big screen at a very young age -- and I was an instant fan (although the movie is totally not appropriate for a 4-year-old). When Ghostbusters II released, I was an enthusiastic 9-year-old itching for a return of my favorite proton-gun-slinging heroes. Despite the 5-year gap between the original and its one-and-only sequel, young fans like me had been reintroduced to the characters in their animated form in the 1986 series, The Real Ghostbusters -- which became a huge hit on the small screen. While Ghostbusters II was unable to recapture the magic of its predecessor (and undoubtedly had been affected, in at least its tone, by the popular television series), it still reunited the New York City heroes, giving them one more big battle with the supernatural.

2016 saw a complete reboot of the franchise, detached from the 80's films (and I still have no desire to see it; its trailers and some clips I've seen are enough to confirm my extreme lack of interest in it. I'm a fan because of the characters and the 80's movies themselves, not the mere franchise name alone), but the upcoming 2021 release of Ghostbusters: Afterlife -- a long awaited Ghostbusters III of sorts -- is set to honor the legacy of the original '84 heroes. (But more on that when it comes time to finally review that new film...)

As an anything-Ghostbusters-hungry preteen, it was easy to forgive Ghostbusters II's shortcomings. First off, the film opens 5 years after the guys saved New York City--and the world--from an interdimensional being named Gozer, but we learn quickly that they had been sued for the destruction they caused the city, and the Ghostbusters had quickly disbanded. Bummer, right? Now the guys are off doing their own things: Egon works for Columbia University again, Peter hosts a silly phony TV show called "World of the Psychic," Ray owns his own occult bookstore and appears as a Ghostbuster with his fellow ex-colleague Winston for children's birthday parties as entertainment. Even Peter and Dana's relationship didn't survive in the time since the first film. How depressing is all of this? Instead of seeing the guys still keeping the city safe everyday like their animated alter-egos, they're basically failures (save for maybe Egon who seemed to land on his feet just fine).

But, of course, you can't have a Ghostbusters II without the guys getting back together for at least one more world-saving mission, but this time it comes in a very unexpected form. Dana Barrett, now working at the Metropolitan Museum of Art, is noticing some strange things happening at work. And before long, she has the guys investigate a strange phenomenon that affected her baby, Oscar, which leads to the gang getting back together and discovering that an evil sorcerer is "alive and well" in a painting in her museum. (Boy, she's just got all the bad luck, huh?)

It's a silly premise to say the least, but it paves the way for the introduction of the fun "mood slime" (psychomagnetheric slime that's affected by human emotions), slime blower packs, the updated Ecto-1A, and the chance to see Peter, Ray, Egon and Winston suit up together one last time (RIP Harold Ramis). It's heavily flawed, but it's still great to see the team together again.

Aside from its silly setup, the goofier and lighter tone of the film is a setback. Furthermore, the odd swapping of Elmer Bernstein as composer from the original to Randy Edelman's corny melodramatic, more whimsical score is unfortunate. (I'd love to hear Bernstein's score mixed into a cut of Ghostbusters II. In Edelman's defense, however, I did more recently read that Bernstein didn't return because he was busy scoring a different film and wanted to get away from scoring comedic films). What makes the original my favorite film of all time has largely to do with the way director Ivan Reitman handled the material. The tone there is far more grounded, with the humor much dryer. The goofiest thing about the original is Rick Moranis's nerdy neighbor character, Louis Tully. Even Slimer and Stay Puft were handled as ominous, with the characters' interactions with them creating the comedy. It felt more like "real life if something extremely out of the ordinary happened," whereas Ghostbusters II feels more like a live action episode of The Real Ghostbusters. The sequel's best moments come when the original team is back together and fighting the supernatural again. It's more of that curious blend of comedy and horror that made the original so great. The courtroom battle with the Scoleri brothers is easily the film's highest point, with other great moments including the bro time the guys experience at the firehouse as they test the mood slime with a toaster. The finale, where the foursome finally battle Vigo is also great, albeit a bit rushed. It's creepy, it's funny, and we get to see good triumph over evil once more (and on New Year's Eve, even - making this a fun one to watch around the holidays). But some of its biggest problems, in addition to all of the earlier ones mentioned (them being broken up, the uneven tone, weak plot, and weak score), include the reduction of Moranis' Louis and Annie Potts' Janine Melnitz to glorified caricatures. Janine, who was such a fun addition to the team in the original, feels so poorly handled and wasted here. They made her a live action cartoon character. It's a real shame.

The content for the film would probably make it PG-13 by today's standards. There's a handful of profane words, although less than the original, and while there is a little adult humor, it also seems toned down from the first film. Still, the movie deals with the themes of ghosts and even possession, which, while touched on in the original, even more directly affects the immediate foursome this time. There is no glorification of occultic things (unless you count Ray owning his own bookstore as such), but I always appreciated Winston's proclamation of believing in God and Jesus in the 1984 film, and any references like that are absent this time around. Overall, it's probably a bit rough still for younger viewers, even if the overall lighter tone is more up their alley (still, some of the Vigo-centric scenes are just so creepy, it's liable to "scare the socks off" some younger kids -- and a brief scene in the subway where scary Halloween-mask grade heads pop up to scare the guys still conjures up in me the uneasiness I felt when I first saw it as a 9-year-old).

Overall, Ghostbusters II is a disappointment compared to its predecessor. With the death of Harold Ramis, who played Egon Spengler, in 2014, all chances of seeing these guys together again on screen were dashed to bits (but thankfully, fans can pick up 2009's Ghostbusters: The Video Game, and its 2019 "remastered" version, to at least see digital representations of the guys and hear their voices together again). As nostalgia and the chance to see Peter, Egon, Ray and Winston back in the saddle once more, Ghostbusters II is a treasure, but alone, as a sequel, it vastly pales in comparison. Still, hopefully Ghostbusters: Afterlife will be a worthy Ghostbusters III when it makes its debut this year.

Sex/Nudity: While on Peter's "World of the Psychic" TV show, a woman tells of how an alien lured her to his hotel room (which really sounds like a story she made up to cover an affair -- which is the joke here); Peter jokes to Egon that he bets the girls at the university "dig that large cranium of yours," to which Egon says "they're more interested in my epididymus" (a genital joke); Peter tells Dana "I'm a man! I need to feel love, I need to be desired!"; When investigating Oscar's room, Egon says "I'd like to run some gynecological tests on the mother." Peter quips, "Who wouldn't?"; Louis tells the judge that the Ghostbusters are under a restrainment order and could be exposing themselves. Peter jumps in and quips "And you wouldnt want us exposing ourselves!"; Peter jokingly asks Ray if he's "sleeping" with the mood slime, to which Egon coughs in a guilty manner. The guys react in disgust and Peter says "You hound!" while Winston smiles and says "Its always the quiet ones."; While prepping to give baby Oscar a bath, Dana unbuttons her shirt and we see her in her lacey bra as she goes to put Oscar in the tub; Peter has Dana and baby Oscar sleep over because of the slime incident in her apartment. As he discusses sleeping arrangements, Peter playfully suggests she spoons him, because if he spoons her hell choke in the night on her hair. She then suggests the couch for him; As Peter photographs the painting of Vigo, he jokingly sasses the painting and tells Vigo to give him hot and sexy for a photoshoot. He asks the painting if the girls like him and adds "How about the guys? I bet the animals do, too."; We see Dana wrapped in just a towel after a shower; Peter jokingly tells Dana that the guys tried on her clothes while searching her apartment; While Janine is babysitting Oscar with Louis, she begins flirting with him. She says "Id like a child myself, do you?" to which he awkwardly replies, "Tonight?" She then puts her leg over his leg and plays with his ear; Dana comes home and Louis pops up from the couch startled, his hair a mess. Janine then pops up from the couch too, revealing they had been making out on the couch. Janine ties her shirt back up, while Louis's belt is visibly undone. After Dana goes to check in on Oscar, the two fall back down on the couch, kissing more; When the guys are standing before the Statue of Liberty, Peter jokes, "It makes you wonder, huh?" and one of the other guys asks "Wonder what?" and Peter says "If she's naked under that toga. She's French, you know that"; Janine starts at Louis' crotch and slowly zips up his jumpsuit. They then passionately kiss; Ray tells Vigo that if he wants a baby, he should Knock up some willing hellhound; We see a Roman-style painting of four men in togas with bare chests.

Alcohol/Drugs: Peter and Dana have wine in a fancy restaurant.

Blood/Gore: While Winston, Ray and Egon are checking out the underground railroad, a series of ghostly, decapitated heads appear on sticks (They look like disturbing Halloween store type masks). The guys scream and the heads then disappear; Not gory or bloody, but we see a creepy demonic face briefly when the villain morphs at one point near the end.