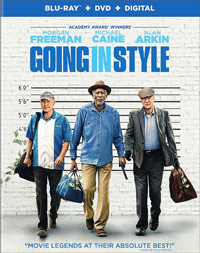 Desperate to pay the bills and come through for their loved ones, three lifelong pals risk it all by embarking on a daring bid to knock off the very bank that absconded with their money. (from Warner Bros. Home Entertainment) 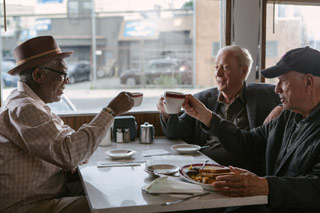 Going In Style is a remake of the 1979 film of the same name, starring George Burns, Art Carney, and Lee Strasberg. While remakes are all too common, it seems fair to want to revisit this premise with a trio of modern day screen legends almost 40 years after the original. Honestly, when I first heard of this new version, I was unaware that it was a remake or that the original even existed. I think that kind of obscurity makes it ripe for the remaking, and Scrubs star Zach Braff takes the director's chair for this update. The end result may feel a little familiar, but it's also quite enjoyable.

The last film in recent memory that shares a similar premise was also a remake. The underrated 2005 remake of Fun with Dick and Jane (featuring Jim Carrey) saw a family fall victim to corporate greed and decide to take matters into their own hands by committing a string of robberies in an attempt to take back their lives. 2011's Tower Heist was also a more personal revenge film where a group of people who share a New York high rise as a longtime place of business are swindled out of their retirement funds. Going in Style takes the more intimate scope of a smaller group of people of Dick and Jane -- in this case, three people -- as well as the threat of home foreclosure, and combines it with the pension loss angle from Tower Heist. The end result sees three Hollywood legends uniting to take what they've earned back from the big businesses that stole it from them. 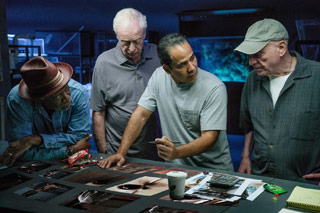 I loved the Ocean's 11 remake and its two sequels--there's just something about a good, old-fashioned heist film--but in most cases, they tend to glorify the act of stealing. Granted, the story often tries to justify the act, giving seemingly good cause for their unscrupulous actions, but as the viewer, you end up rooting for the thieves, hoping they get away with it. Going In Style does a fair job setting up the story, showing how down-on-their-luck these three men are - from losing their pensions to almost losing their homes and not being able to afford to see their families. But they decide that, at this stage in the game, they haven't got much to lose, and they put it all on the line in an effort to recoup their losses.

The cast is a solid one; not only is it helmed by three greats in Michael Caine, Morgan Freeman, and Alan Arkin, but Christopher Lloyd has a funny recurring bit part, Ann-Margret plays a love interest for Arkin's character (whether he likes it or not), and Matt Dillon plays the investigator on the case. The central trio are a blast to see together, and unlike the poorly executed Grudge Match in 2013, which also starred Arkin amongst a stellar cast of aging Hollywood greats, Going In Style is a satisfying comedy. It gets off to a slightly bumpy start with a pee gag in the first scene, followed by quite a few jokes and reminders about how old the main cast is, but before long, Going In Style has found its stride, and Braff proves he can use some of the best talent in the biz to produce an entertaining PG-13 comedy about getting older without it being completely depressing in the process. One of the film's best scenes is when Caine and Freeman attempt to shoplift at a local grocery store, while Arkin is getting hit on by Ann-Margret, and it's just purely delightful. The actual heist is a lot of fun, too, and the film surprises the audience by revealing more to it than what we'd initially witnessed once the authorities begin to suspect them (much like the finale in Ocean's 11 or 12). 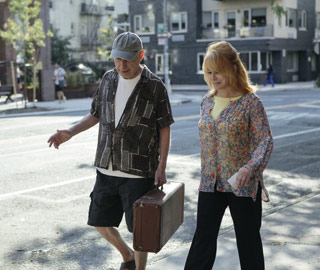 The content is pretty edgy PG-13 comedy material. I was surprised by just how much drugs played a part in the plot, mostly to drive the comedy. Joe (Caine) has an ex-son-in-law who has his own pot store in New York, and he ends up getting some to try to entice a local criminal to help them. They end up passing a joint around and smoke it to prove how serious they are to the criminal and a couple following scenes show them high (and enjoying it) and trying to combat the resultant munchies. Language is also frequent, with quite a few uses of the "S" word and some blasphemy. There's also one strongly pronounced "F" word by a woman at a grocery store and an appearance of the song "Feel Right" by Mark Ronson that features over a dozen uses of a partially abbreviated "motherf---". Lastly, there are few sexual references, as well as two scenes where we briefly see Arkin and Ann-Margret in bed after sex. All of it adds up to a surprisingly edgy comedy, and I would have enjoyed the film more if they'd just toned it down some.

Overall, Going In Style does a pretty good job at balancing comedy with commentary on getting older and how difficult it can be to make a living. A great cast and good direction from Braff help make Going In Style a successful heist comedy. Just heed some caution before trying to watch it with the family.


Going In Style is available on single-disc DVD or in a Blu-Ray/DVD combo pack with a bonus Digital HD copy. The Blu-Ray disc offers the film in beautiful, crisp HD as well as with the following behind-the-scenes featurettes...

Commentary with Zach Braff - There are only two little extras on the Blu-Ray disc -- deleted scenes and a feature-length commentary from director Zach Braff. It seems odd that so little was made for this film, but these are two decent extras to include (if nothing else). Braff's commentary is an entertaining one, addressing production notes and highlights, and reflections on the cast and filming in New York and elsewhere. If you like the film and enjoy commentaries, I'd recommend listening to Zach's.

Deleted Scenes (13:11) - There are thirteen minutes of deleted scenes, all lumped together in one montage of sorts. The first shows Joe getting picked up by his granddaughter. The second shows Albert flirting with Annie at the grocery store checkout (2 "d*mn"), while the third one shows Albert and Annie sitting on a rooftop talking (1 "d*mn"). Next is an extended scene of the trio driving with Joe and Willie being high and eating donuts (1 "a" word, 1 "oh my G-d," 1 "h*ll"), followed by them being given cellphones and trying to figure out how to text. The next scene is a little callback to the bank's "teaser rate" mentioned in the opening scene, where Joe warns a couple not to buy into it, and then there's a short scene where Murphy finds the red envelope that Joe received from the bank. Finally, we see a short scene of Willie skyping with his daughter and granddaughter, Albert playing the saxophone for Annie, Murphy and his daughter playing catch, and Joe revisiting the bank. They're decent little additional moments, but I can understand why they were cut out.

Sex/Nudity: The guys are watching The Bachelor on TV, and the girl in the show's dress is a sexy v-neck that goes down to her belly button, revealing her cleavage. While watching the show, Joe refers to one of the guys as a "man whore." Albert chimes in with "monogamy is an outdated concept. One of them comments that the girl is a "walking venereal disease;" While talking about chicken to Albert, Annie suggestively says "breasts are better than thighs, don't you think?" Albert replies coldly, "I can go either way;" Al and Annie are flirting at the grocery store again and suddenly the next scene shows the two falling down on a bed with the sheets pulled up over them apparently right after having sex (they're sweaty and out of breath, and still partially clothed under the covers); Joe says of Al, "How can he sleep?" Willie replies, "He's getting laid." Joe responds, "Oh yeah. I remember what that was like."; Al tells a cop that he an Annie "made love twice. No, three times." and then we see the same shot from before of them falling back on the bed together after sex.

Alcohol/Drugs: After getting covered with flour, a store owner quips that one of his employees "looks like a Columbian drug mule;" Joe's ex-son-in-law owns a pot store and we see all kinds of different brands of pot on a shelf with crazy names; A man passes a joint around to Willie and Joe who both briefly smoke it. We then see them really high in the next scene and having the munchies after; A joke is made about having cocaine to Milton and he later tells the cops he was being sold cocaine (when he wasn't); The boys have champagne with dinner.

Violence: A bank is raided by men with guns and they threaten the people inside and shoot their guns in the air; Joe and Willie speed away from a robbery on a motorized cart and almost get hit by a bus; As Albert speeds out of a parking lot, his car smashes into a shopping cart; The trio practice firing pistols at a firing range; We see footage from an Al Pacino movie on TV where he's yelling and kicking a glass door. We then see he's surrounded by police; During a robbery, a bank teller fires a gun at the robbers, shattering glass behind them. He then empties a clip at them and misses each time. Al then unloads his clip of blanks at him before telling him they're blanks. Disclaimer: All reviews are based solely on the opinions of the reviewer. Most reviews are rated on how the reviewer enjoyed the film overall, not exclusively on content. However, if the content really affects the reviewer's opinion and experience of the film, it will definitely affect the reviewer's overall rating.