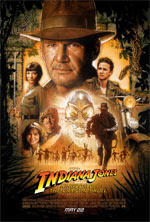 Indiana Jones and The Kingdom Of The Crystal Skull 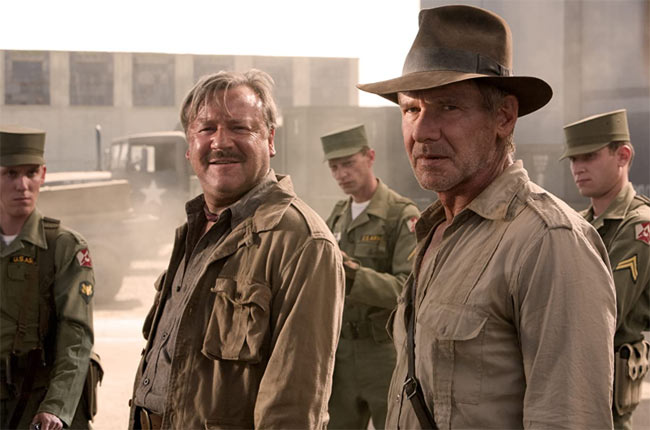 In 1957, Indiana Jones is thrust back in action, venturing into the jungles of South America in a race against Soviet agents to find the mystical Crystal Skull. Accompanying him this time around is a young greaser named Mutt Williams who enlists Jones' help to rescue his mother who is being held captive by the Soviets. Little does Indy know that Mutt's mother is none other than his old flame, Marion Ravenwood...

I probably wasn't even walking yet when film fans first saw Harrison Ford don a fedora as Indiana Jones in Raiders of the Lost Ark (and some may remember that the film was never "Indiana Jones and..." until the inevitable sequels released). I wasn't even ten yet when the third and "final" Indiana theatrical adventure released in 1989, The Last Crusade, which has gone on to become one of my favorite movies of all time. With Raiders and Crusade, Indiana Jones takes part in discovering two of the greatest Biblical treasures: The Ark of the Covenant and the Holy Grail (AKA the cup of Christ). Both stories are grounded in historical facts and legends and involve a time when the Nazis were seeking to rule the world with great power. While Temple Of Doom deviated from this idea, so does the fourth Indiana Jones adventure, the oddly titled: The Kingdom Of The Crystal Skull. Many wonder how a 65 year old Ford could pull off the role of Jones again, but the answer is that he shines again as the leather-jacket wearing hero, even if you can't help but wish they'd just made this dang film 15 years ago.

The Kingdom Of The Crystal Skull certainly has the ingredients of the B-movie feel that the previous films offered, but with a bit more reliance on CGI effects and the glam they bring. This movie, which director Steven Spielberg would be quick to admit, is for the diehard Indy fans who've been waiting for Jones to return, but that doesn't mean Spielberg (and George "Star Wars" Lucas who wrote the story) didn't take some artistic liberties with the world Indiana resides in. First off, as with Raiders and Crusade, Indiana's dragged into a quest to find a powerful relic - this time the Crystal Skull - in a race to stop some baddies from getting their hands on it first. In this case, the Russians fill in this time around in 1957, long after World War II has ended and Indiana is now a war veteran. Facts and incidents are suggested to have taken place sometime over the 19 year gap between rhe events of Crusade and Skull, which sort of tease you, making you wish you could have witnessed some of these events. Also, while Crusade was a fitting end for the original trilogy, the storytellers utilize the chance to tie up a few loose ends with Skull. Still, there's part of the fact that this film is made for 2008 when the last one was two decades earlier that makes the look and feel much different than before. In some cases, Crusade was a bigger picture with feet grounded in reality (with a few exceptions), while Skull feels a bit smaller with some big action and set pieces and its creative head set way above the clouds.

The plot of The Kingdom Of The Crystal Skull is tough to talk about without revealing too much. The backstory was kept pretty hush on what the deal is with the whole "Crystal Skull" legend and, in this case, it's a lot more like Temple of Doom than the other two films. Where Indiana had a kid and a leading lady tagging along in that installment, here rising star Shia LaBeouf is along for the ride as Mutt Williams and Raiders Of The Lost Ark's Karen Allen returns as Marion Ravenwood. How everyone gets together is a pretty fun little set up and it's great to see the team together on the screen. Another addition to the cast is Ray Winstone as Mac who is an old pal of Indiana's and finally, John Hurt appears as Professor Oxley. However, by the film's climax, it seems there may be too many characters sharing the screentime to the point where some of the focus is taken off of Indy. In Crusade, Indiana had to face the three trials to find the Grail alone, and it was a fine character moment for him. The climax of Crystal Skull, for the most part, is a bit underwhelming, from the manner of resolution to the full reveal behind the legend of the Crystal Skull itself. It ultimately seems to lose any semblance to an Indiana Jones adventure. 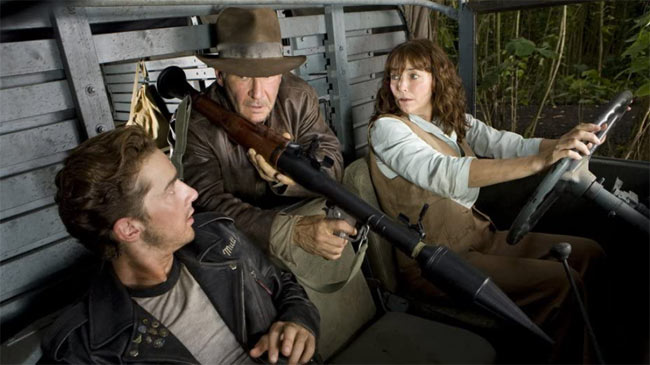 Some nitpicking aside, I'm still thrilled to even be reviewing a fourth Indiana Jones adventure. It's the type of film that fans have enormous expectations for, so chances are they'll be let down no matter what. It's the kind of movie that most likely improves with another viewing or two. And while I can't say I really feel completely "let down," there are just a few plot elements that don't sit well with me (that I can't divulge here unfortunately - due to it being spoiler territory). What I did enjoy about this film was the fantastic opening action sequence that gets things on track right off the bat. Surprisingly enough, much of what was in the trailers that didn't seem to have anything to do with the amazon in Central America, was almost all from the opening scenes of the movie - so there's quite a bit in Kingdom Of The Crystal Skull that the trailers didn't spoil for us. Spielberg and Lucas keep the film's mood pretty light, more like in Last Crusade, with Jones playing a bit of the Connery role as his father with Shia's Mutt being a younger partner for him. Some of the dialog and action sequences are really fun, with the latter moments specifically including the aforementioned opening action, a romping motorcycle chase scene, and the extended truck chase scene in the jungle. Spielberg kept the action fun and frisky and there were certainly moments where I was reminded of the feel of the other Indy films (and keep your ears and eyes open for subtle references to the other movies - and even Star Wars!). Still, there is at least one really outright moronic moment, particularly when we see Mutt swinging through the trees on vines with a a large number of monkeys (Lucas, was that your idea?!). There are still a few other eyebrow-raising moments, including a gag involving the atomic bomb, but all-in-all, it's just for fun, and it's something the viewer has to keep in mind as the film sputters down to its rather wacky conclusion. As a side note, it's kind of funny to be watching Indiana Jones 4 and be reminded of elements from the 1999 version of The Mummy (which was largely criticized for feeling like a rip off of Raiders of the Lost Ark), all the way down to the way a villain gets his comeuppance. Funny how things like that go full circle. 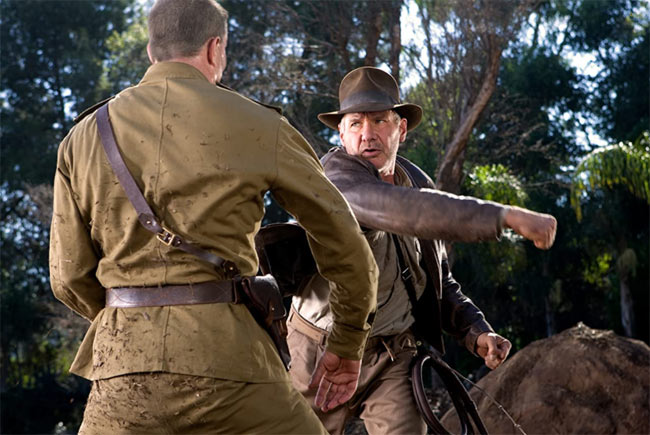 Content is certainly toned down for the fourth spin. While we do see our fair share of skeletons or partially decomposed dead bodies, there's very little bloodshed. Even when the other three films take their villains out in some gruesome form or another, it's things like that that are held back more here. It's still a far cry to call this a kid-friendly flick, but it's nice to see Spielberg not go too far over the edge with violence. Crystal Skull presents a handful of language (most of it in the forms of "h*ll" and "d*mn" with the occasional "s" word or "S.O.B." thrown in), and a fair share of some more intense or creepy moments. One of said moments does involve man-eating bugs that overtake a few victims (not nearly as bad as the scarabs in The Mummy, but you get the idea), and some ghostly tribal attackers in the night.

All in all, The Kingdom Of The Crystal Skull is an enjoyable installment in the Indiana Jones saga. Sure it's a wholly unnecessary addition to the original trilogy, but a fun and welcomed revisitation nonetheless. Ford is great once again as Dr. Jones and while the youthfulness has left both Ford and his leading lady Karen Allen, Spielberg revitalizes the characters by adding Shia to the mix. And while Crystal Skull doesn't exactly live up to the hype to its fullest expectations, especially with a few truly over-the-top moments or a premise that probably sides a bit too much with myth and legend that historical fact, it's a great summer movie with plenty of nostalgia to accompany it. But here's to hoping if there is a fifth film, that Ford isn't replaced and the franchise isn't turned over to LaBeouf. I think I'd rather see it conclude with Crystal Skull entirely.

Sex/Nudity: We see Indiana standing behind a large window naked as he's getting scrubbed down (from a contamination). As the camera pans back, the base wall under the glass blocks anything below his waste, and he reacts skeptically to one of the brushes going below his waist (played for laughs)

Alcohol/Drugs: Mutt takes a beer off a server's tray (he's probably under age) when the server isn't looking, but Indiana snatches it off the table and puts it back on the tray; Mutt makes a comment about someone "smoggin' the noggin'" which is a probable reference to smoking some kind of drug

Blood/Gore: We see what looks like a decomposed hand sticking out of some sort of body bag; We see various somewhat gross looking dead bodies/skeletons in a tomb. When a preserved bag is cut open, we see a dead body's face quickly shrivel up (reacting to the air after not being preserved any longer); A tribal character is about to shoot a poisonous dart til a person blows into the front of it, which shoots the dart into the mouth of the attacker (we see their surprised face and mouth open with maybe some blood); Mutt has a slightly bloody cut on his face from being sliced with a sword; Mutt's face is a bit bloody/beaten after a fight; Indy's face is a bit beaten after a fight; We see some goo after Spalko squishes a bug (and later see that again with another one); During a fight, a man is hit in the face repeatedly and spits out some blood; We see a swarm of bugs overtake a man and pour into his mouth as he screams. One also goes up his nose. The bugs then drag the body into a hole; We see a large number of tribal people lying on the ground dead. We see a few briefly with bloody bullet wounds in their backs; We see what looks like fire blowing out of a character's eyes before they are vaporized

Violence: Lots of shooting - including a tribe of jungle people are slaughtered by the Russians; Some hand-to-hand fights; A brawl breaks out in a diner; There's some sword play; Indy hits some attackers with a shovel; We see a few explosions, etc. Please also see "Blood/Gore" for more specific violent moments. Disclaimer: All reviews are based solely on the opinions of the reviewer. Most reviews are rated on how the reviewer enjoyed the film overall, not exclusively on content. However, if the content really affects the reviewer's opinion and experience of the film, it will definitely affect the reviewer's overall rating.