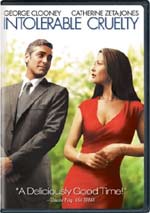 Intolerable Cruelty is a romantic comedy about a man who wins in court and a woman who courts to win. George Clooney portrays Miles Massey, a prominent Los Angeles divorce 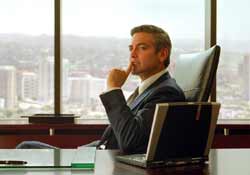 attorney who has everything and in some cases, two of everything. Despite his impressive client list, a formidable win record, the respect of his peers and an ironclad contract (the "Massey pre-nup") named after him, he's reached a crossroads in his life. Sated on success, boredom has set in and he's looking for new challenges. All that changes when Miles meets his match in the devastating Marylin Rexroth (Catherine Zeta-Jones). Marylin is the soon-to-be ex-wife of his client Rex Rexroth (Edward Herrmann), a wealthy real estate developer and habitual philanderer. With the help of hard charging private investigator Gus Petch (Cedric The Entertainer), she has Rex nailed and is looking forward to the financial independence a successful divorce will bring. But thanks to Miles' considerable skills, she ends up with nothing. Not to be outdone, Marylin schemes to get even and that's when things get a little out of hand... especially when Massey finds himself falling for the conniving Marylin... (summary from IntolerableCruelty.com)

Catherine Zeta Jones has always been a favorite to watch since she caught the public's eye over five years ago in The Mask of Zorro with Antonio Banderas. George Clooney has always been a least favorite as something about him has just always rubbed me the wrong way. However, in 2001, his performance as Danny Ocean in the remake Ocean's 11 won me some respect for the actor in his ability to play characters so well. This is no exception for this year's quirky comedy Intolerable Cruelty. In fact, the best thing about Intolerable Cruelty, oddly enough for me, is Clooney's performance. Dare I say it -- and forgive me -- but his neurotic shenanigans in this film reminded me a lot of the charming Cary Grant in such dark comedic films like this in Arsenic and Old Lace. While that might be true, Clooney's Grant-ish performance isn't enough to save this awkward and often lacking comedy.

While Catherine Zeta Jones remains a gorgeous actress five years into her stardom, that's about all she has going for her in Intolerable Cruelty. Like in America's Sweethearts, The Haunting, and here, Catherine plays mostly unlikable spoiled brats. Why she hasn't picked a truly deep and likable role (that I have seen) in awhile, I don't really know. The problem with her character being so scheming and shallow in Intolerable... is that it makes the romantic moments kinda hard to swallow. Besides her looks, what does Clooney's character see in her? She's not given enough depth in the film to really help you understand why Massey feels he must be with her. 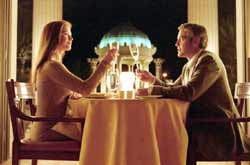 What the film does have going for it is the few true laugh-out-loud moments. These usually involved Clooney's neurotic behavior or most of the time he's interacting with his partner Wrigley. The film was often too risque for my tastes. It felt a little like Liar Liar in its court themes based around sexual infidelity. Vulgarity was moderate with a waitress in a diner spouting the "f" word frivolously and several other colorful words are used throughout the film. But I was ready to throw something at the screen if they used the phrase "nail his *ss" one more time. Could they say it enough? It was used well over twenty times and it just felt juvenile after awhile. There is some violence including one scene where a person accidentally kills himself and it's played for laughs. Sadly, the surprise of the moment is relatively humorous but quite distasteful. Otherwise, this film bathes in sexuality to the point of just being overbearing. If it were a little less risque, it'd been much more enjoyable.

So the verdict? Skip it. It might be in the same style of some old school screwball comedies a la Cary Grant, but it isn't content-wise. Some might enjoy it, but I personally don't recommend it.

Sex/Nudity: Plenty -- mostly in dialog. We see Donovan come home to find his wife fooling around with the handyman (we don't see anything, but they talk about it); At a court case, we hear a woman talk about her husband's obsession with sex and mentions some toys; Rex takes a woman to a motel to sleep with her (although he's married) and we soon see her in skimpy underwear before he climbs on top of her and then are interrupted as they're caught; Gus watches some videos of couples caught in adultery with some friends and comments that a woman is about to take off her panties however nothing is shown but we hear them comment when they see it; There is some double meanings and innuendo used in dialog; We see Miles on top of Marylin on a bed, clothed and the camera pans away as they kiss, insinuating that they then sleep together; We see Rex jumping up and down on a bed with about five other scantily clad women in lingerie but nothing happens; We see a glimpse of footage on a TV show in passing of what looked like a man on top of a woman in a field, and his bare butt is blurred out (and they're apparently caught in the act of adultery).

Alcohol/Drugs: Some people drink and smoke; Rex drives wildly on the road while apparently being drunk

Blood/Gore: Donovan has blood on his pants from where his wife hits him with a statuette; although not graphic, a criminal accidentally puts a gun in their mouth and shoots themself. We see the bullet hole through the window behind them but no blood or anything graphic (it's played for laughs despite being a morbid joke)

Violence: Some. Donovan pulls a gun on his wife and her lover when he sees she's having an affair and she hits him on the head with a statuette and pokes him in the butt and he fires the gun accidentally as her lover drives off; a character accidentally shoots themself, killing them; A dog bites Miles' hand. Disclaimer: All reviews are based solely on the opinions of the reviewer. Most reviews are rated on how the reviewer enjoyed the film overall, not exclusively on content. However, if the content really affects the reviewer's opinion and experience of the film, it will definitely affect the reviewer's overall rating.