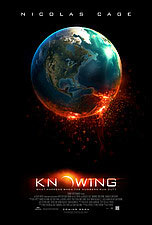 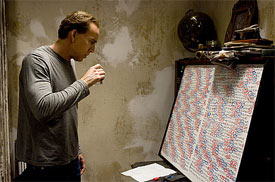 Academy Award® Winner Nicolas Cage (National Treasure: Book of Secrets, Leaving Las Vegas) stars in Knowing, a gripping action-thriller of global proportions about a professor who stumbles on terrifying predictions about the futureand sets out to prevent them from coming true. His increasingly desperate efforts take him on a heart-pounding race against time until he finds himself facing the ultimate disasterand the ultimate sacrifice... (from MovieWeb.com)

When a movie plot is given a science fiction twist when you're not prepared for one, it can make or break the film depending on your recpetion of it. For example, when it was revealed that "interdimensional beings" were presented as the focal point for Indiana Jones' latest findings in last year's The Kingdom Of The Crystal Skull, it was a pretty tough pill to swallow. Nicolas Cage's latest thriller, Knowing, takes an intriguing look at the idea of predestination and coincidence through a sci-fi lens. And while that is likely to give it a limited appeal, it's executed well through strong storytelling and acting by Cage and his co-stars. 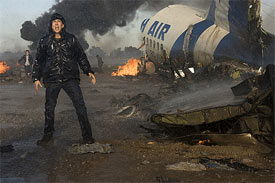 It's difficult to talk about Knowing without giving away key plot points and developments. So consider this review to not have any major spoilers, but there may be a few little ones throughout. Knowing opens fifty years ago when a classroom of students are given the assignment to draw a picture of what they think the future will look like for the purpose of burying it in a time capsule for students to find half a century later. A student, named Lucinda, who also birthed the idea for this assignment, was a quiet, somewhat disturbed little girl who proceeds to cover an entire sheet of paper with what seems like random, nonsensical numbers. Fifty years later, the present day students of that same school are in attendance when the time capsule is dug up and its contents are distributed to the them. Nicolas Cage plays John Koestler, an MIT professor of astrophysics who is a widower raising his son by himself in Lexington, Massachusetts. It just so happens that his son Caleb is handed this paper of numbers, and it soon finds its way into John's hands, piquing his curiosity. It's not long before John's world is turned completely upside down when he discovers that the numbers predict every major disaster (and its death toll) since the year the paper was placed in the capsule.

Knowing is a layered thriller that is mindful of the details and its concept from start to finish. Cage brings a lot to Koestler - a single father who lost his wife tragically a year or so before the events of the movie, causing him to believe that life just happens and there's no purpose in it. We discover that John's father is a pastor and his family are believers, but he has chosen not to talk to his father anymore. And it's during this conflict and period of self-pity (it's also apparent that he has developed a drinking problem since the loss of his wife), that this paper lands in his hands and stirs up his way of thinking. Cage can tend to play similar characters from film to film, but as Koestler, he subdues his usual traits and characteristics to play much more of a believable, common man instead of some kind of hero or action star. 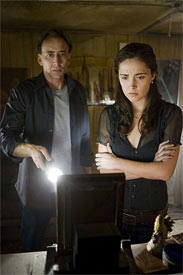 The film doesn't compromise the characters or story for thrills either. The only action really takes place during a few disaster sequences and the special effects during these moments are pretty startling. Violence is ultimately the main concern for viewers, but most of it isn't graphic or gratuitous. However, the way Alex Proyas directs these disaster sequences is certainly jarring. In the first disaster sequence, we even see some victims running around on fire, but it's shown from a far enough distance that it isn't very graphic, but is likely to be disturbing. The same can be said for a following sequence that is drawn out longer than the viewer might expect, as we see a fair amount of destruction in the process. There's a hint of a "horror" feel to some of the scenes involving the mystery surrounding the random numbers and what they mean. Lucinda, in the film's opening sequence, is a bit disturbed and Proyas builds the suspense up with it. There's a moment when Lucinda goes missing and is found in a closet at the high school scratching at the door and we see her bloody fingertips briefly. Aside from that, there are some creepy moments involving mysterious characters who show up throughout the film, which brings more tension and even chills to the movie. There is some language (although nothing noticeably "strong" as its rating suggests - which usually implies the use of the "f" word), but Proyas keeps it down to a pretty small amount with just about 5 "s" words and a few other mild obscenities, as well as a couple uses of "oh my G-d."

Again, it's tough to get into Knowing without giving away the meat of the movie, but director Alex Proyas and the acting team assembled for this film make an impactful sci-fi thriller that ventures deeper than the surface level. It's refreshing to see a film that involves Christian believers and for them not to be shown in a very negative light. It's revealed in a great exchange between John and his sister Grace that she is a Christian and she simply asks him what's going on in his life so that she can pray for him. It's a sweet and genuine moment that feels much more like a realistic depiction of a good Christian family than what Hollywood normally depicts Christians to be. There are also little elements sprinkled throughout the film, with a conclusion that makes for an interesting follow-up discussion afterwards. But there's good chance viewers will be left with plenty of questions when the film concludes, too.

In conclusion, Knowing is an intense thriller with solid acting and a theme that will leave much to talk about. Knowing is not a film for everyone, with a great deal of violence and disturbing content brought about through the disaster sequences, but the Christian themes (including forgiveness and resolution) give the movie a redeeming quality. So if you can forgive a science fiction packaging that presents an implausible yet entertaining plot, Knowing is well worth a look.

Sex/Nudity: We briefly see John in the shower, but there's no nudity beyond his bare back.

Alcohol/Drugs: We see John drinking heavily in several scenes as he has developed a drinking problem since the loss of his wife; An elderly teacher is seen spiking her tea with liquor while talking to John in her home

Blood/Gore: We see blood all over Lucinda's fingers after she had been scratching at the inside of a door; We see a couple people on fire (at a bit of a distance) amidst a plane crash wreck; After a tragic accident, we see some blood on a miscellaneous person's head in a distant shot; After a car accident, a woman has some blood on her face

Violence: (Some spoilers may be included here!!) We hear a girl scratching at the inside of a closet door and then see blood all over her fingertips; When John is investigating the numbers, he drops a glass on the floor, which shatters, upon making a realization; We see an airplane descending through the sky, break through some powerlines, and crash in the distance. We then see some people running around on fire; John goes chasing a man through a city street who seems to be suspicious, believing the man may be carrying a bomb. He chases him onto a subway and they are both held at gunpoint by the police. John then realizes the subway is what is in danger and we see it run off the track and barrel through the subway tunnel, crashing into things, killing people inside and, when it goes off the track and onto the landing platform, it plows through a crowd of people, leveling a group of them; John holds a gun on a suspicious character, but nothing happens; A car runs through an intersection and is suddenly t-boned by a truck, sending the car into a roll; We see some buildings on fire; We see some people looting city streets; (Big spoiler ahead!!!) We see a wave of fire burning up buildings and people in a largely dramatic sequence that levels an entire city... Disclaimer: All reviews are based solely on the opinions of the reviewer. Most reviews are rated on how the reviewer enjoyed the film overall, not exclusively on content. However, if the content really affects the reviewer's opinion and experience of the film, it will definitely affect the reviewer's overall rating.