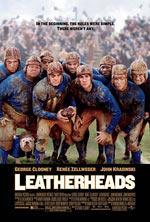 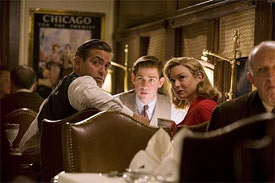 Leatherheads is a quick-witted romantic comedy set against the backdrop of America's nascent pro-football league in 1925. Clooney plays Dodge Connolly, a charming, brash football hero who is determined to guide his team from bar brawls to packed stadiums. But after the players lose their sponsor and the entire league faces certain collapse, Dodge convinces a college football star to join his ragtag ranks. The captain hopes his latest move will help the struggling sport finally capture the country's attention...

When you hear actor George Clooney's name, you don't usually associate him with directing. However, the 2008 football comedy Leatherheads is Clooney's third outing in the director's chair - and also marks the first time the actor directs himself in the lead. The film is set in the mid-1920's and takes a candid look at the formation of pro football. Clooney's character "Dodge" Connelly is a football hero who scrambles to reassemble his team once their sponsor drops out. Clooney takes a much different approach to comedy and action in Leatherheads, aiming for more of a classic screwball comedy than straight dry humor or the current, more popular raunchy style in a lot of today's comedies. The end result is a bit unbalanced, however.

From the moment you see a middle-aged George Clooney barrelling down a football field with a wild look in his eye, it's difficult not to immediately think of renowned movie star Cary Grant. While Grant excelled at drama and comedy alike, he was no stranger to the "screwball" format, starring in such classics as Bringing Up Baby, His Girl Friday, and Arsenic and Old Lace. Grant was a comedic genius and had the charm to match, so it's not a surprise to find actors emulating him all these years later. But from start to finish, Clooney displays immense inspiration from Grant's antics, expressions, and line delivery. For those who know Cary Grant's material, Clooney just seems like he's trying too hard to be Grant. Still, Clooney does a decent job mimicking the actor, and much of Dodge's behavior could have been performed by Grant for sure. 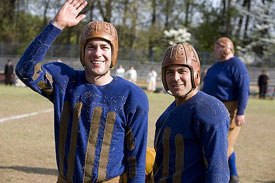 Fans of the show The Office will enjoy seeing John Krasinski on the big screen again. Last year's complete miss, License To Wed, was a poor opportunity for the TV star to make an impact in feature films, but Leatherheads gives him a lot more to do. Set in the sort of idealistic age of the 1920's where John's character, Carter Rutherford, is a war hero and up-and-coming football star, Krasinski gets a chance to stretch his acting talents for football action sequences, a fist fight with Clooney while staggering around drunk, and even stepping into the trenches for a war flashback. While Clooney's delivery isn't natural for him (although quite entertaining), Krasinski seems comfortable in Rutherford's shoes. Renee Zellwegger rounds out the main cast as a feisty reporter hoping to grab an assistant editor position at the paper she works for. While she plays a straighter role to Clooney's more spastic, almost O Brother, Where Art Thou Dodge Connelly, she doesn't seem to deviate too far from the type of character she played in the romantic comedy Down With Love several years ago. But she makes a fine match-up for Clooney and even Krasinski in Leatherheads.

Clooney's direction is a pretty valiant effort in Leatherheads. The only problem was the tone of the film seemed a bit indecisive. The movie has an overall comedic feel, but when a few sequences get especially goofy - in the original screwball comedy fashion - the film gets a bit off balance. Where Down With Love was steadily a nod to the Rock Hudson, Doris Day comedies of the 60's, keeping that tone throughout, it seems as if Clooney wasn't sold on keeping the screwball tone throughout the whole film - like in a film such as Bringing Up Baby. Those films only work as well as they do because they embrace the format completely. Because of the almost schizophrenic nature of the tone in Leatherheads, it hurts its overall outcome. And it's sad, too, because the players involved pull off the sillier antics wonderfully when given the opportunity to. 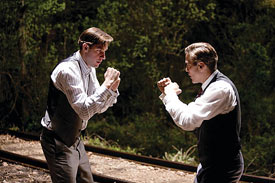 The content is surprisingly mild for a comedy these days. Language is its biggest offense, featuring mostly uses of blasphemy above anything else. A few minor uses of innuendo are also found, but nothing explicit or especially crude. If the language was omitted, the film easily could have been released in the thirties or forties. In fact, the movie could almost have passed for PG. There are plenty of PG-rated films - even Bobby Jones: Stroke Of Genius - that feature worse language. However, the film gets its rating for "brief strong language" when it's mostly undetectable as to why it might have gotten that. But with a close ear, you can pick up Clooney's Dodge mutter an "f" word as he sits up following a fist-fight which knocked him off his feet. I hadn't caught it the first time I saw the movie, but I noticed it the second time. It's silly to have included it, but it's likely Clooney did it just to ensure higher than a PG rating (as to attract more adults). Still, the biggest strike against Leatherheads is the amount of blasphemy in it, which is just not necessary.

All in all, Leatherheads is still a fun and entertaining film, even if Clooney had trouble getting the tonal quality of the film just right. With strong performances from the cast, Leatherheads skates by with just a few bumps and bruises. Clooney might not have completely dropped the ball, but - despite a fumble or two - still scores a decent nod to the classic screwball comedies of the golden age of cinema. I'd love to see more movies try to capture the spirit of that time in film history, but it'll take more than mimicking a famous actor or dialog style to make a winning picture.

Sex/Nudity: Some comments are made about Lexie's legs (and about how they're the first thing people notice about her); Some minor innuendo comments are made; We see Dodge and Lexie passionately kiss briefly

Alcohol/Drugs: Carter talks about drinking during the war and passing out because of it. We later see Carter drunk and drinking from a bottle; Dodge drinks several times, including in a bar a couple times. Many other characters are seen drinking in a bar; Suds is drunk most of the time, and is seen drinking from a flask, which Lexie takes a swig from as well

Blood/Gore: Dodge and some other guys after a bar fight have some scrapes and minor cuts and bruises on their faces

Violence: Football violence; Dodge and Carter get into a fist fight; A bar fight erupts inside a speakeasy; Cops raid a bar and chase everyone out. Lexie and Dodge slam a door closed on the cops, knocking them out. They steal their uniforms and are chased to an open window, where a man happens to be threatening suicide in the window above them. They then jump into the net below to escape the police Disclaimer: All reviews are based solely on the opinions of the reviewer. Most reviews are rated on how the reviewer enjoyed the film overall, not exclusively on content. However, if the content really affects the reviewer's opinion and experience of the film, it will definitely affect the reviewer's overall rating.