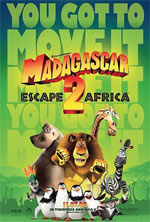 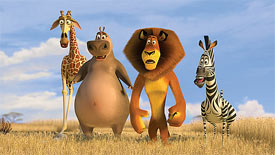 Left marooned on the distant shores of Madagascar, the New Yorkers have hatched a plan so crazy it just might work. With military precision, the penguins have repaired an old crashed plane -- sort of. Once aloft, this unlikely crew stays airborne just long enough to make it to the wildest place of all -- the vast plains of Africa itself -- where our zoo-raised crew encounters species of their own kind for the very first time. While discovering their roots, they quickly realize the differences between the concrete jungle and the heart of Africa. Despite long-lost relatives, romantic rivals and scheming hunters, Africa seems like a "crack-a-lackin" great place...but is it better than their Central Park home? (from MovieWeb.com)

In 2005, DreamWorks debuted the moderately successful feature, Madagascar - the story of a group of New York Zoo animals who head for the wild and get stranded along the way on the island of Madagascar. The film ended with them being stuck there, but wanting to return home to New York. The humorously abrupt ending could have stood on its own, but was perfect fodder for a sequel, as if originally planned for it. However, its follow-up, 2008's Madagascar: Escape 2 Africa doesn't quite feel part of the plan, and this may be its biggest problem.

When Robert Zemeckis' 1985 film Back To The Future concluded, the director was stuck with a major plot formality that made later plans for a sequel to the popular flick a problematic one. Madagascar seemed to have an all too perfect a setup for a second film, but while watching Madagascar: Escape 2 Africa, I got the feeling that the filmmakers either didn't quite know where to take the story next, or they tried too hard to make lightning strike twice. The end result is ultimately rather mixed.

The 2005 film centered mostly around Alex the lion's friendship with his zebra pal Marty, and the struggle with connecting to his wild roots. This was all brought about because Marty was getting cabin fever inside the NYC Zoo and made a mad dash from his pent up life to find open fields. As the characters begin to find themselves, they meet new animals and even battle some tense situations that test the strength of their friendships. In Escape 2 Africa, nearly every original character element is tinkered with while the filmmakers desperately try to incorporate every memorable character from the first film into this one, no matter how forced it might feel. The biggest mistake in the attempt to do this is arguably the bringing back of the little old lady that beats Alex with her purse from the Grand Central Station scene in the first film. The old lady, referred to as Nana, then appears in the delightful Christmas short, The Madagascar Penguins in: A Christmas Caper, which was made for the DVD release of the first film, but here she's given a strangely expanded part. Not only does Nana seem to have superhuman strength (as displayed in a bizarrely violent fist fight with Alex), but she becomes a sort of survival guide to several stranded groups of tourists in Africa... who just happen to all be from New York City? Small world.

Another random problem - as made evident in the trailer - is apparently Melman the giraffe has always loved Gloria the hippo. Not only was this not even slightly hinted at in the first film, but one of Melman's character charms was his impossibly hypochondriacal personality. His neurotic nature was bizarre and funny, but most of that is softened up this time around. Melman does get more screen time, but it hardly feels like the Melman from the first story. But even when we get an adorable flashback to see all four of the zoo animals as babies, it feels like an obvious plant as they take that isolated moment to hint even then that he had a thing for Gloria. The one other character tampering - which is minor, however - is Alex is given a birthmark on his paw that is clearly not there in the first movie. It's little things like that, though, that make the story feel more contrived than a continuation of the first film. The penguins are still a highlight of the movie, but they don't quite get the kind of genius material they were gifted in Madagascar or A Christmas Caper. Surprisingly, the best moment from them that wasn't spoiled in a trailer is before the film even begins!

Last, but not least, including Julien the lemur with his sidekick Maurice as a tag-a-long never really seems to fit either, although they get some chances to steal the show. Even Mort's occasional Scrat-like pop-ups feel out of place, despite still being funny. I guess the main problem is a lot of the film feels sporatic and spastic instead of as fluent as before. Characters like Julien, Mort, and even the classy monkeys felt like additions to the plot in the first film, while circumstances are fabricated around them here in attempts to find ways to include them somehow. Sometimes the ludicrous moments that ensue are worth such efforts, but the fact that it tends to feel so put-together does do the film some damage. Perhaps repeat viewings might help the flow from part one to part two, but I get the vibe that the feels between the two installments are just too different.

So, what did work? Well, the chemistry between the main four zoo animals is still there. On top of that, I don't think I'd ever get tired of those psychotic penguins (would they work in their own feature film? Heck, can we give them a Pinky & The Brain-style TV show?), and the idea to take the crew to Africa is a good one, even if it could have been handled a little better. The storyline with Alex being reunited with his parents in Africa does make for some nice moments. Sadly, the late comedian Bernie Mac feels wasted as the pretty reserved Zuba, while Alec Baldwin does a great job voicing the villain Makunga, despite the character himself being a mediocre (if not stereotypical) one. Still, with all the gripes, Madagascar 2 remains an enjoyable movie. It's entertaining even when the jokes aren't hitting the mark, and it's rather refreshing that they didn't resort to spoofing any real significant movie scenes like they did with the first Madagascar (Cast Away and Planet Of The Apes especially come to mind). Also, the content is a little milder than the previous one. While the language was pushed just a bit before, it's cleaned up considerably here. Parents might not like the "sexy" hippo Moto Moto, voiced by rapper Will.i.am, who sings somewhat of a sensual song to Gloria, with whom he's enamored with because of how "big" she is. While it's not overtly offensive, I could see some parents being caught off guard by it. Other than that, some violence would be the only other main concerns for some.

All in all, Madagascar: Escape 2 Africa was a fun time at the movies, but disappointing in comparison to its predecessor. It may not be worth the price of admission (perhaps a matinee), but you could certainly do a lot worse. It just seems a shame that Madagascar: Escape 2 Africa feels more like an installment of Ice Age than Madagascar. At this point, I could take or leave a third film, but if they choose to go that route, here's to hoping they capture more of what was so fun about the first one.

Sex/Nudity: We see Julien dressed in coconuts and a grass skirt and he asks who is attracted to him; Julien's little salamander licks his ear and he acts as if he is also talking into his ear. Julien responds that he's being naughty; Moto Moto is instantly attracted to Gloria because of her size and there's some sensual soul/R&B music that plays as he approaches her and comments on how big she is. Later, while they're on a date, he talks about her size and how big she is again; SPOILER: there's a wedding at the end where Skipper the penguin marries a grass skirt bobble head doll

Vulgarity/Language: None (although Gloria says something like "What the HELLO are you...")

Blood/Gore: Zuba has a bloody ear with a hole in it (briefly seen) after he's been shot by a hunter; We see a lion with a black eye

Violence: Mostly played for comedy: Mostly comedic violence; The penguins slap each other; Zuba is shot in the ear by a hunter; Kowalski pulls a switchblade out and threatens some animals (as a gag, and doesn't use it); Nana and Alex have a pretty violent fist fight; A guide carries a rifle and threatens to use it (and fires it at least once); Nana is deliberately rammed with a jeep; Some people go after some animals with spears and such; A huge lion slams another really hard into a rock, giving the victim a black eye; an animal is tied up and hung over a fire pit (but escapes); some little animals are roughed up (as humor); a shark chases after Mort (even onto land); and other comedic violence Disclaimer: All reviews are based solely on the opinions of the reviewer. Most reviews are rated on how the reviewer enjoyed the film overall, not exclusively on content. However, if the content really affects the reviewer's opinion and experience of the film, it will definitely affect the reviewer's overall rating.