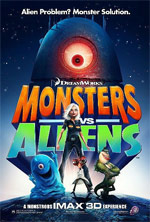 When California girl Susan Murphy is unexpectedly clobbered by a meteor full of outer space gunk, she mysteriously grows to 49-feet-11-inches tall and is instantly labeled a "monster" named Ginormica. The military jumps into action, and she is captured and held in a secret government compound. The world learns that the military has been quietly rounding up other monsters over the years. This ragtag group consists of the brilliant but insect-headed Dr. Cockroach, Ph.D.; the macho half-ape, half-fish The Missing Link; the gelatinous and indestructible B.O.B.; and the 350-foot grub called Insectosaurus. Their confinement time is cut short however, when a mysterious alien robot lands on Earth and begins storming the country. (from MovieWeb.com)

While Pixar Studios has had a perfect track record of making solid family friendly animated comedies, DreamWorks Animation has been fairly hit and miss. Whether it falls a little flat like Madagascar 2 or gets way too preachy like SharkTale, DreamWorks has a few strikes against them. The studio also tends to not shy away from slightly more offensive content either, sometimes riding the line with suggestive humor or occasional mild cussing (like in the Shrek films). But every now and again, they'll release animated gold, like with last year's action comedy Kung Fu Panda and 2006's Over The Hedge. So where does Monsters Vs. Aliens rank in the mix?

Monsters Vs. Aliens pays homage to the classic science fiction and monster movies of the 50's and beyond, making little nods at The Blob, The Day The Earth Stood Still, Godzilla, War Of The Worlds, Attack of the 50 Foot Woman, The Fly, and even E.T. The animated feature pokes fun at the genre, much in the satirical way that Tim Burton's Mars Attacks had, but probably a lot more effectively. The plot centers around a young woman named Susan who gets struck by a meteorite on her wedding day and grows to an incredible height. The government had been following the meteorite's impact position and immediately seize her upon arrival. She's soon admitted into a special secret ward where a select few monsters had been kept hidden for over fifty years, waiting for a reason to pull them out of hiding. So when aliens land on Earth and begin wreaking havoc, the military decide it's time to unleash the monsters.

Much of the story revolves around Susan's struggle with her new super-sized life and the hopes and dreams she once had having been shattered by the cosmic accident. The story paces itself pretty nicely to allow for some character development, with Susan especially, and mixes a great deal of action and humor together. The animation is also pretty incredible. The only times things seemed to get a bit dicey was sometimes when the human characters were speaking and their mouth wasn't always convincingly matching up. However, it was forgivable as the film was pretty thoroughly enjoyable otherwise. While the jokes weren't constantly flying, it wasn't too surprising to later learn that one of the film's two directors (Conrad Vernon) had been one of the three directors that worked on Shrek 2. A lot of the random, silly, and ultimately funny bits bore a similar feel.

Content pushes the edge just a tad when it comes to language or suggestive content. There are at least a couple uses of "G-d" (as in "Oh G-d" or "Oh my G-d"), as well as a "L-rd" and a substitute for "sweet J-sus" that is said as "Sweet Cheezits." There isn't much in the sexual content department to worry about. B.O.B. is a mindless blob and makes a comment about Susan being a boy because she has "boobies" -- it's played rather innocently as a gag because of how unintelligent he is. Another sequence shows a couple of teenagers sitting in a car at a make-out spot in the woods where the girl is the one who tries to come on to the guy (who pushes her away). It's obviously a joke towards the films of the era (and maybe even a joke towards Witherspoon's role in Pleasantville perhaps?), but it felt a little out of place for a family film (even if nothing does happen between the two). All of the film's violence is of a cartoonish nature and is for comedic purposes, so none of it feels too excessive or brutal.

Monsters Vs Aliens is a delightful sci-fi animated comedy that pays homage to the monster movies of the classic age of cinema. Monsters Vs Aliens is a fun blend of action, humor, and heart, without ever forgetting its main goal is to entertain. While it may ride the edge just a smidge for being a family film, it mostly remains pretty family friendly - and a comedy that the adults should enjoy quite a bit as well.

Sex/Nudity: When Susan gets hit by the radioactive meteorite, she grows really big and her wedding dress starts to tear, exposing a lot of her legs and a little bit of her thigh; B.O.B. comments that Susan is a man. When the other monsters correct him that Susan is a "she," he says "She? It's a boy - look at his boobies!;" We see a teenage couple in a parked car in the woods at what looks like a typical makeout spot. The girl actually throws herself at the boy who keeps pushing her off, saying she's moving too fast. The aliens crash land nearby and she jumps out of the car (with the boy continuing to act wimpy); As W.R. Monger is talking about how big Susan is, he holds his hands in the general area of his chest, realizes what it looks like he's talking about (i.e. the size of her breasts, but he's not), and puts his hands down; When Susan sarcastically tells Gallaxhar that she has been in a similar extraordinary situation before, he comments that she really gets around; As a man is going through a security check by scanning his eyes, elbow, tongue, etc, we then see him pull his pants down and scan his bare butt-- therefore exposing the side of his butt and thigh while on the scanner. Later we see Monger adjusting his pants and zipping them up after apparently having just done the same thing; B.O.B, who has no brain and is constantly confused, makes comments about being in love with or having been in love with Derek, Susan's fiance, but it's just played for laughs as he is otherwise entirely mindless

Alcohol/Drugs: Dr. Cockroach mixes a cocktail at a party that explodes accidentally

Violence: Lots of action violence and comedic violence... A meteorite hits a woman (who is fine, but grows into a large radioactive woman); Army vehicles try to tie the woman down and in the process, some people are thrown around. They shoot a tranquilizer dart into her and she pulls it out and throws it and it sticks in a man's foot (played for laughs); A large robot crash lands on Earth. The robot crushes a podium and the Army fires back on it; The robot attacks buildings in San Francisco (causing a lot of damage) and then destroys the Golden Gate bridge during a long action sequence; A character is zapped and appears to be dead; Dr. Cockroach mixes a cocktail at a party that explodes accidentally; B.O.B. accidentally shoots and kills an evil alien, then Dr. Cockroach does the same; Susan busts through walls and such while chasing an alien; the monsters throw and toss and push through hordes of aliens; A large ship explodes; and other assorted comedic cartoon violence... Disclaimer: All reviews are based solely on the opinions of the reviewer. Most reviews are rated on how the reviewer enjoyed the film overall, not exclusively on content. However, if the content really affects the reviewer's opinion and experience of the film, it will definitely affect the reviewer's overall rating.