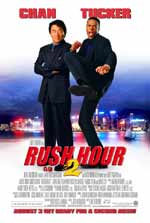 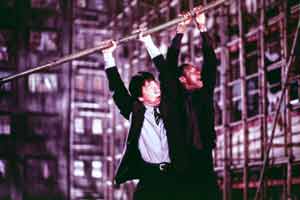 While LAPD officer James Carter (Chris Tucker) is visiting friend Detective Inspector Lee (Jackie Chan) on vacation in Hong Kong after solving a kidnapping case in America together, their relaxation is cut short when a Lee decides to take a case involving the bombing of the U.S. Embassy. A plot involving a counterfeiting ring soon ties in, dragging the Secret Service into the picture. As Chan is soon pit against an old rival who used to work with his father, the issue becomes a personal matter with Carter reluctantly by his new-found pal's side.

Sequel Summer 2001 continues with my personal most-anticipated movie of the year, along with The Mummy Returns, action/comedy Rush Hour 2, the sequel to the runaway hit from 1998. The original Rush Hour attached two unlikely heros together-- motor mouth Chris Tucker and martial arts expert Jackie Chan. But what was put together worked beautifully. A fun mix of action and comedy resulted and audiences found it appealing as the movie went on to make some big bucks at the box office.

We all know what big bucks means these days for almost any movie... a sequel. And of course, a sequel we got. But it wasn't just the all-action-and-nothing-else Mummy Returns or the poorly executed Dr. Dolittle 2, what we have is a movie that succeeds its predecessor in more ways than one. While the plot is quite weak and as a whole not too intriguing, the laughs are abundant and the action is exciting. While Rush Hour 2 did tend to rush through itself quite a bit, it didn't have the uncomfortably fast pace of The Mummy Returns. While there isn't much character development Oscar award winning moments, one must remember this is not the movie for such things. Rush Hour 2 is very simply an action comedy film with the single goal of entertaining. And entertain is what it does.

But of course neither Rush Hour film is without flaws. While Rush Hour suffered from excessive language, Rush Hour 2 suffers from more bedroom humor than the first film offered. And this is surprising considering how the first film was almost clean as a whistle in this category. But this film has multiple references with Carter wanting to hook up with some women in China, two main characters being beautiful women (plenty of possibilities there) and 3 instances of brief nudity (mens' butts). Isabella shows quite a bit of cleavage in some scenes, and in one scene, we see her remove her shirt and skirt and we see her skimpy lingerie. In that scene, which is done light-hearted all played for laughs, Lee is spying on the room when this happens and watches in awe while keeping the sight from Carter. As a result, Lee ends up getting rather "excited" and oddly comments "Oh baby, slow down," which is played for laughs, but seemed uncomfortable for what is expected from his character. Other than that, Carter tries picking up Isabella in another scene, suggesting 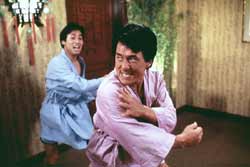 they shower together, but she rejects him. Concerning nudity, while in the massage center we see some beautiful women wearing some revealing clothing. More importantly, during a fight sequence at the parlor, Lee grabs the towel of an attacker (each person is naked, wearing only a towel) and we see his bare butt for a split second, then from his front as he covers his crotch before seeing him from behind again for a second. Later, see see from a far distance, Carter and Lee get out of a car completely naked and see their bare butts for a second. Then we see them running down a busy street naked holding newspaper and garbage can lids at their crotches.

Violence is high due to the martial arts antics of Chan, but blood/gore is kept at a minimum only included in 3 minor instances with Carter having a slightly bloody lip, a woman having some blood on her arm, and a dead body with a knife handle sticking out and a little bit of blood around it. Luckily they didn't go overboard on the violent/bloody material as they could have.

With objectionable material aside, I thought Rush Hour 2 was excellent and an hour and 45 minutes of a great deal of fun. And one of the best parts was surprisingly the outtakes! These were probably some of the all-around funniest I've ever seen! Much better than that of the original Rush Hour. But while the plot was much weaker, the action and jokes were bigger and funnier. Rush Hour 2 is thankfully not the miss a lot of sequels have been lately. (Gotta love the desperate cry to Jesus when Carter falls off the building onto the bamboo rod in the beginning) The scenery in Hong Kong is visually more interesting than in the first film as well. And it's more pleasant not having Lee and Carter bogged down by a lot of same-side opposition as they did in the first film with the F.B.I. Once again, and probably more so this time around, a lot of the jokes center around Carter being black and Lee being Asian and a lot of the stereotypes around that. A lot of below-the-belt jokes are cracked but are all meant in a light-hearted fashion and not so malicious or distasteful as some may think. Don't take these jokes too seriously as they are not meant to be.

Overall, I was impressed by this follow-up to the 1998 original I enjoyed quite a bit. Although the movie does suffer from a few lines of sexual dialog and some brief (comical) nudity, I still found the movie really enjoyable even though that did hinder my opinion of it a little. All in all, I'd have to admit Rush Hour 2 is one of the best films I've seen all year! Please read all the content details carefully.

Sex/Nudity: Carter comments to Lee that he wants some "mu shu," which is a type of food in Chinese, but Carter probably means it sexually. Lee and Carter visit a massage parlor where a group of beautiful women in bikinis or other revealing clothing ready to service them. During a fight sequence in the massage parlor, we see a man's bare butt in the foreground of a scene which switches to a frontal view of him holding something in front of his crotch, and then back to a rear shot. We see a distant camera shot of a car stopping on the highway and dropping off Carter and Lee, both of whom are naked. We then see them running through traffic with them holding objects covering their crotches and seconds later, we see a closer view of them as they enter the police station. Isabella shows a great deal of cleavage in a dress and Carter spots her and then tries to pick her up. He suggests taking a shower together and such, but she refuses. While staking out a room through binoculars, Lee spots Isabella in a man's room. After the man leaves, she starts to undress (while Lee watches and acts like nothing is happening when informing Carter). We see her in her bra that shows cleavage and Lee becomes increasingly bothered and excited, Carter looks and sees her removing her skirt to reveal her in very small black underwear. Later, Isabella opens her robe and we see her black bra again. Upon seeing this, Carter slips and says "t*tty" instead of "city" in a sentence to her.

Alcohol/Drugs: We see some people randomly having drinks throughout the film.

Blood/Gore: After being hit, we see Carter has a tiny bit of blood on his lip. We see some blood on a woman's arm after she's been shot there. We see a dead body lying on the ground with a knife in its stomach. There is a little bit of blood around the knife. (right after he's been stabbed -- which isn't directly seen).