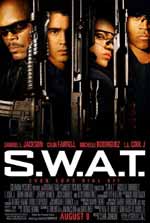 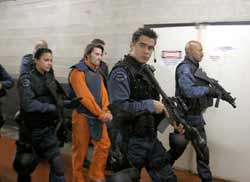 They're the best of the best, the elite of the law enforcement. And they've been recruited for their most dangerous mission ever. Inspired by the popular '70s television series, the explosive action-thriller S.W.A.T. stars Samuel L. Jackson and Colin Farrell and is directed by Clark Johnson. Farrel plays Jim Street who, along with his partner, is kicked off S.W.A.T. until re-recruited months later for an important assignment. After weeks of demanding physical training, the new S.W.A.T. team is quickly thrown into action when a notorious drug lord Alex Montrel (Olivier Martinez), audaciously offers a $100 million bounty to anyone who can free him from police custody. As they escort the kingpin out of Los Angeles and into the hands of the Feds, they are pursued by a ruthless and well-armed band of mercenaries.

I was kind of surprised to find that the summer action-thriller S.W.A.T. was based on a television. And considering how I was a child of the '80s, I'm pretty surprised I'd never heard of it till this movie. So without any knowledge of the show, I can't compare the two. But knowing Hollywood's track record, I highly doubt the movie version is anything remotely like the television show. With that, the film stars Samuel L. Jackson, the rowdy newcomer Colin Farrell and rapper-turned-actor LL Cool J. It's a testosterone filmed film for the guys that probably has enough fit-guys-with-no-shirts-on shots to keep the ladies interested.

Character development is sacrificed for the most part in S.W.A.T., as a lot of attention is payed to the plot and the often-intense action sequences that surround them. While the film pauses for some important interaction between a few characters, you never learn much about their backgrounds or who they really are. So, for the most part, we meet the main team in passing as we sit on the sidelines watching their responses to tense situations and rooting for them because either you like the actor (or actress) or you just know that's what you're supposed to do. 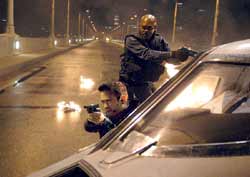 Farrell appears here in his second law enforcement movie this year with training sequences (The Recruit was the first) and Jackson assumes the leadership role. LL, Michelle Rodriguez, and a couple other lesser-known actors round out the rest of the primary team in the film. LL Cool J fit his part really well but Rodriguez's constant "don't mess with me" front was a little over-the-top and tough to swallow. With a constant stone-faced tough-girl grimace plastered on, Rodriguez just seemed more like a bitter child who'd been picked on one too many times than a woman on a law enforcement team. Jeremy Renner plays Street's loose cannon partner in the beginning of the film, but when he shows up again, it tosses some reality out the window along with the film's all-heck-breaks-loose ending. While some elements of the ending may seem like a "been there, done that" thing for Hollywood cop films, it's adequate enough for this police action film. However, the film's best moments were when it was sticking to the books and placing us on the sidelines of some more realistic sequences.

Content-wise, S.W.A.T. is an utter disappointment. While the sexual content is thankfully kept down to a few comments and the sight of a random girl flashing a motorcade (we just see her bare back as she lifts her shirt), the language of the film is pretty strong as it offers at least 1 "f" word, almost 20 "s" words, and close to 20 uses of blasphemy. It wasn't necessary and only took away from the scenes it was used in. Violence was heavy but often not very graphic. In instances where you'd expect the camera to focus on the violence, surprisingly they cut away most of the time. However, some moments are still pretty rough including one where the villain, Alex Montel, slits his Uncle's throat (not seen, but the action is seen and heard) or when Street's hand is impaled with a knife and stuck to a board (again, not focused upon or shown up close, but the action is seen). Spiritually, the film is empty. A character we briefly see a couple times in the beginning of the film is a proclaimed Mormon who discusses how he became a Mormon for his wife. While they make several references to this character's religion, the film isn't promoting it. However, there is no real support of any religion as it isn't the focus of the film in any way.

It's not a soft film and is definitely not one for the younger crowd. The vulgarity was offensive as was some of the sexual dialog and the violence was pretty rough, so I wouldn't really recommend this film unedited. If it's the kind of film you think you might really enjoy, I suggest waiting til it's edited on TV or filtered through the DVD-editing program ClearPlay.

Sex/Nudity: Some sexual references are made including Gamble making a vulgar gesture with a pool stick to antagonize Street; we see a crazy man in his briefs as the police attempt to apprehend him; we see the bare back of girl who flashes her chest at a passing vehicle.

Blood/Gore: We randomly see Jim vomit after working out at the beach; A criminal has bruises and cuts on his face as Sanchez (who caused those wounds to the criminal) has some cuts on her chest from the fight (which was not seen); After killing someone, Alex wipes blood from a knife onto his shirt; Alex uses a shard of glass to strike Street and cuts his ear. We briefly see a tiny bit of blood on his ear; A cop is shot in the neck and we see some blood around a cloth being applied to them as well as blood on Sanchez's hands who is helping; Sanchez has some blood on her arm; We see the action of Street's hand impaled by a knife (from a distance, in the dark), but do not see any graphic details; Street later has some blood on his face and mouth after a fight. We then see him spit out some blood.

Violence: Excessive amounts shooting, a fist fight, stabbings, some deaths, explosions, etc. Disclaimer: All reviews are based solely on the opinions of the reviewer. Most reviews are rated on how the reviewer enjoyed the film overall, not exclusively on content. However, if the content really affects the reviewer's opinion and experience of the film, it will definitely affect the reviewer's overall rating.