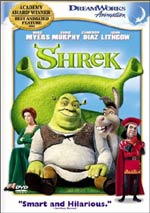 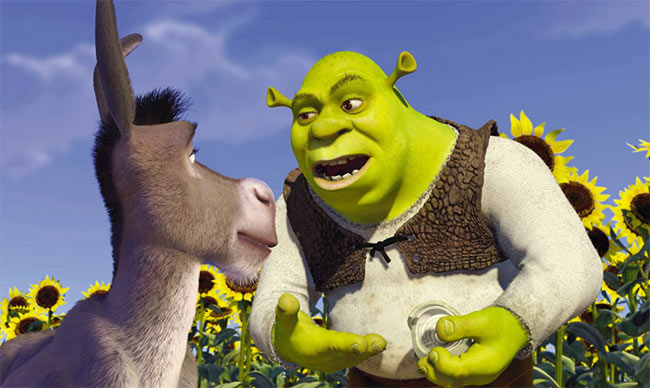 An ornery ogre named Shrek is unwillingly paired up with an obnoxious donkey as he goes on a quest to save a princess at the request of a prince who in return offers Shrek's over-run swamp returned back to normal.

I like cartoons. However, I'm not really big on cartoon movies. I often see them, and like them, but would hardly consider any of them my favorite. That changed with last year's The Emperor's New Groove. This year, some promising cartoons are being laid out for the the viewer. This is kicked off with the zany and fun Shrek by DreamWorks, which, coincidentally, is head-up by a former Disney employee. So, naturally, it is questioned if Shrek is just a sort-of revenge on Disney on his part. But regardless of if it is or not, the end result is excellent.

Speaking of Emperor's New Groove, that's the best cartoon I can compare this film too. However, it's not very "Disney." While Emperor's was off-the-wall, very random in jokes and thought, it still had a whole lot of heart and was very light-hearted and silly. Shrek is the same way, but yet presented in a slightly less juvenile way. It's definitely a movie for adults and young ones a lot. Yet, maybe more so for the adults. 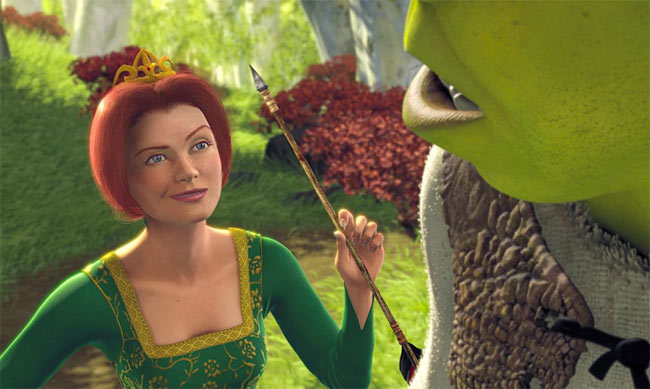 The animation is excellent. The art is wonderful. It's crisp, it's clear, and joins the likes of Toy Story as having amazing art. You forget you're watching a cartoon half-way through the film. The characters are lovable and unforgettable and the jokes are clever and hilarious. I found myself almost constantly laughing! Eddie Murphy was perfect as the donkey, as were the rest of the characters in their roles. I got a kick out of the jokes involving the Gingerbread Man, the Muffin Man, the Three Blind Mice, and Pinocchio. The format reminded me of the creative, hilarious "screw-ball" comedies of yesteryear.

Content is mild, but some is unnecessary for a family film. Language includes a couple "d*mns" and a few "a" words, but each is either in direct reference to the donkey, or a play on words in reference to the donkey. Sexual content is rather minor as well, but still present. While Donkey is sleeping, he's talking in his sleep and it sounds as though he may be having a sexually-related dream. Also a comment about Snow White could be taken as a double meaning. Violence is present but no real instances of blood or gore are present. Some gross things exist, including Shrek removing ear wax to use as a candle, an eyeball as an olive for a martini, the Donkey pees on a fire to put it out (seen from a distance), Shrek eats a dead rat, and several other instances. Shrek beats up a group of nights, but no one really dies or is mortally wounded.

So all in all, I thought the movie was great. It was a lot of fun and I'd definitely see it again. You come to really like Shrek, as he is introduced as a mean, anti-social ugly ogre, but becomes more developed as the film progresses. Fun from beginning to end, Shrek is undoubtedly already one of the best movies of 2001.

Sex/Nudity: While spoofing The Dating Game, the narrator introduces three women, including Snow White whom the announcer states, "Although she lives with seven other men, she's not easy." As Donkey is talking in his sleep, he says "Yeah, baby - that's the way I like it." (we don't know what about)

Alcohol/Drugs: Shrek drinks a martini. He also later drinks from a large keg of beer. Farquaad has a drink later on in the film.

Blood/Gore: An arrow is sticking out of Shrek's butt but there is not blood or gore.

Violence: various acts of slapstick violence (but nothing horribly violent) Disclaimer: All reviews are based solely on the opinions of the reviewer. Most reviews are rated on how the reviewer enjoyed the film overall, not exclusively on content. However, if the content really affects the reviewer's opinion and experience of the film, it will definitely affect the reviewer's overall rating.