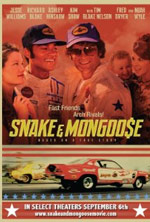 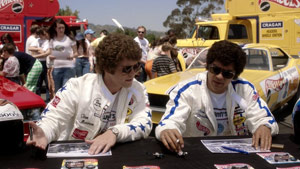 In nature, the snake and mongoose are the deadliest of enemiesgenetically encoded to eternally fight to the death without mercy. Beginning in the 1960's, the nature of that dynamic was strategically and expertly applied to the historic rivalry between Don Prudhomme and Tom McEwen in the most unlikely of venuesa "minor" sport struggling for attention on dusty drag-racing strips at tracks across the country. There, Prudhomme, the Snake, and McEwen, the Mongoo$e, did, in fact, compete aggressively for dominance in the nascent sport of drag racing. Racing aficionados probably know that much of the story by now. (from SnakeandMongooseMovie.com)

If you're a big fan of racing, especially drag racing, there's a good chance you've heard of the racers nicknamed "The Snake" and "The Mongoo$e." Jesse Williams plays Don 'The Snake' Prudomme, while Richard Blake plays Tom 'The Mongoose' McEwen as they pretty much start commercial sponsorship for racing sports. In the film, we see Don and Tom from their younger days trying to make a living while slowly rising to fame as drag racers. We see them meet their wives, start families, and struggle to do what they love while trying to carry on personal lives as well. It doesn't always work either, though, and it becomes the greatest tension for the characters in Snake and Mongoose. 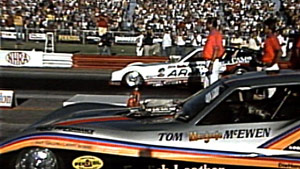 The indie feel of Snake and Mongoose is nearly palpable. But there's also a professional feel in the little details that creates an added tension to the film. It feels uneven because, while there's incredible attention paid to the look of the time period (the 60s and 70s) being very authentic (from the clothes they wear to the cars in the background), there's one glaring thing about this movie that constantly is at odds with itself: not a lick of the racing footage in the movie has been recreated. In a lot of ways, the fact that every single piece of racing footage is authentic and vintage creates this exceptionally dated look when the cars hit the track, but then the footage is clear and modern as soon as it switches back to the actors. It makes the feel that these actors are reacting to nothing (much like an actor acting with a non-existent computer generated creation) all the more obvious. When we see Tim Blake Nelson and Ashley Hinshaw supposedly watching a race from the sidelines and then it cuts to vintage footage and back to them, it just seems silly. In fact, the movie starts to feel like a play or, sadly at times, a SNL sketch. Part of that is in the camera production values and so-so acting from the leads. Williams fairs better out of the two, while Richard Blake does the best he can with what the film offers. Surprisingly enough, while the first third drags a bit (especially with the revelation that all of the footage is raw and from the actual races represented here), the story does rope you in to make the film move a lot faster as it progresses.

The presence of recognizable actors seems a little odd for a film of this kind. Noah Wyle (Falling Skies, ER) may be the most recognizable. He plays the head of Mattel, Art Spears, and while he does a fine job with the bit part, some viewers are likely not to see beyond the fact that Don and Tom are meeting with Wyle to work a Hot Wheels deal, not the real Spears. Similarly, Tim Blake Nelson wears a gigantic mustache as a sports reporter and does add a little validity to the picture just by showing up, but he isn't on screen much. The only other relatively recognizable talent is probably Ashley Hinshaw as Don's wife. She was most recently in the film superpowers flick Chronicle and does okay here. But overall, it really isn't a surprise that this is director Wayne Holloway's first time directing a feature film because it ultimately just feels like an amateur production. The raw, vintage footage makes the movie feel like a documentary without the real-life people starring in it, but then the end credits roll does feature the actual Snake and Mongoose, clinching the documentary feel -- making you feel like you watched a re-dramatization and not a professional feature movie. 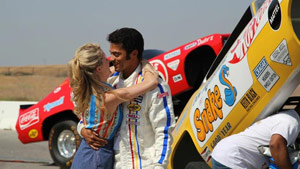 The content for Snake and Mongoose is unfortunately fitting of the PG-13 banner. Given the fact that these guys are racing heroes, and they are sponsored by a childrens toy company, it's not a movie that's fitting for the family. Uses of "h*ll" and "d*mn" are almost constant, while Hinshaw uses the Lord's name in vain twice and other colorful phrases are used by the rest of the cast rather frequently. Don is shown smoking in nearly every scene, while the egotistical Tom ends up having his wife walk out on him and he proceeds to sleep around with his female fans for most of the story. There's some drinking shown, as well as a random but brief shot of a couple of teens making out (and groping) under the racing bleachers. So, while it's not the roughest PG-13 movie you can see, the edgier content seems unnecessary, even if it adds to the realism of these racers' lives. Sadly, it makes both guys hard to find likeable for most of the film, with Don fairing only a little better than his egomaniac partner. (Thematically speaking, there's also a surprise illness that plagues one of the racer's young children and that child does die of Leukemia near the end of the movie.)

Overall, there have been far worse indie films, but Snake and Mongoose just can't seem to lift its head above the fumes that it generates, ultimately dooming itself with its uneven approach. It's not a documentary, but it's not really a whole movie either, and it ends up floundering because of this. And while Snake and Mongoose still remains watchable (the effort is certainly admirable)--and perhaps mostly for the target audience of racing fans--it's not one I can readily recommend.

Sex/Nudity: Tom suggestively tells Judy that he's good with his hands and she tells him she's heard that; We briefly see a couple heavily making out under the bleachers with the guy groping the girl up her clothed shirt; Some girls in mid-drift tops walk buy and Don (who's married) looks at them, "checking them out." Tom teases Don and says "Oh my G-d, you're human!"; A young girl comes out of the bathroom and gives suggestive looks to Tom while he's on the phone with one of his kids. Tom, who's now divorced, follows the girl into the bathroom, placing his hands on her hips as he does (suggesting he's going to have sex with her in there); Wendy asks Tom if they can go to their place to "have fun" and he says he can't play that game anymore.

Alcohol/Drugs: Don smokes in almost every scene in the movie; Judy and Lynn talk while drinking martinis in the kitchen; Don pours champagne at a party.

Violence: We see real vintage footage of a racecar crashing and flipping; We see real footage of two racecars smashing into each other; We see a car smashing on the race track and we hear the driver lost a foot; While arguing, Don and Tom push each other around; A car breaks in two and drags across the track; We hear that one of the racer's children dies of Leukemia; We see more crash footage during the credits. Disclaimer: All reviews are based solely on the opinions of the reviewer. Most reviews are rated on how the reviewer enjoyed the film overall, not exclusively on content. However, if the content really affects the reviewer's opinion and experience of the film, it will definitely affect the reviewer's overall rating.