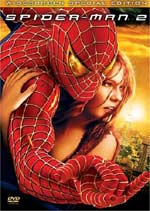 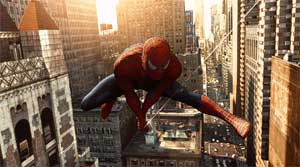 Two years have passed, and the mild-mannered Peter Parker faces new challenges as he struggles with "the gift and the curse," desperately trying to balance his dual identities as the web-slinging superhero Spider-Man and his life as a college student. Tormented by his secrets, Peter finds that his relationships with all those he holds dear are in danger of unraveling. His life-long yearning for M.J. (Kirsten Dunst) becomes even stronger as he fights the impulse to reveal his secret life and declare his love. His friendship with Harry Osborn (James Franco) is complicated by the young Osborn's bitterness over his father's death and his growing vendetta against Spider-Man. Even Peter's beloved Aunt May (Rosemary Harris), who has fallen on hard times after the death of Uncle Ben, begins to have doubts about her nephew. Peter's life is about to become even more complicated as he encounters a formidable new foe -- Dr. Otto Octavius (Alfred Molina). Peter must use all the powers at his disposal to try to stop this diabolical madman in his octagonal tracks. (from MovieWeb.com)

Few could have predicted the phenomenon that the Summer 2002 superhero film Spider-Man would be the runaway smash hit it became. And with every great blockbuster, a sequel isn't too far behind. So for 2004, fans are treated to the next chapter in the life of Peter Parker and his role as Spider-Man and boy... is it a doozy!

I never dreamed of enjoying the first film as much as I did, nor did I ever realize Tobey Maguire would be an ingenius choice for the lead hero. But where Spider-Man had delivered an action-packed story about a nobody becoming a major city's savior and hero, Spider-Man 2 continues the story and takes it deeper than any movie in the genre had ever dared to go. The filmmakers obviously care more for the characters than many would and it shows in a very positive way. We revisit Parker's life as an average guy accomplishing extraordinary things but not without major emotional struggles playing a key role. We watch as Peter struggles to keep a job, wrestle with his feelings for Mary Jane, and continue to deal with guilt and pain of the loss of his uncle. Raimi continues to develop these characters without rushing into the action. To some this will be sure to translate as boring, but the character development we see is crucial to the story whereas other films could get away with less development. Raimi avoids sequelitis by treating Spider-Man 2 as a continuation of the already established story. Not once did I get a rehashed feeling from anything in the movie. In fact, this movie addresses a lot of the emotional tensions from the first movie between characters and as the result of events in that film. Raimi even throws in some tasty and exciting surprises that will be sure to have people talking. 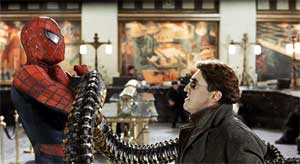 The content in Spidey 2 is even cleaner than the first. Some scenes do tend to be more non-graphically violent and creepy than the first, like where Doc Ock's arms go crazy in an operating room and toss hospital workers around like toys. The only real even remotely graphic content seen are some pretty nasty scrapes and cuts on Spider-Man's body during a fight. Language is very minor, thankfully kept to a bare minimum with just a few exclamations, etc. There's also no sexual content, except for two instances of some really passionate kissing. Otherwise, there's nothing to worry about.

Raimi holds true to the feel of the first movie and never once do we feel like we're anywhere else than in the same world of Spider-Man we were introduced to two years ago. Alfred Molina is superb as the passionate scientist Dr. Octavius. And it's great to see Dunst comfortably back in her role as Mary Jane, as well as James Franco adding a new dimension to his role as Harry Osborn. Although the story takes place two years after the events of the first film, Spider-Man 2 is very aware of Spider-Man, and people who see the sequel before seeing the original will miss a lot of the story progression, references, and reasons for some of the tension. However, Raimi brilliantly uses the title credits to show comic-book renderings of key moments for the first film to refresh our memory.

All in all, Spider-Man 2 is a solid Summer blockbuster and a more than worthy follow-up to the original. If you enjoyed Spider-Man, chances are you'll love 2. If you can forgive some of the slower moments in the film, you'll be tempted to even consider Spider-Man 2 better than its predecessor (if that's possible). As with the first one, it may be a little too intense for the younger viewers, but the family values of the film are right-on and worth taking the family to see. Spider-Man 2 is a tour de force of action, comedy, tenderness, and fun. Don't miss it on the big screen if you can! - John DiBiase (reviewed: 6/29/04)

Alcohol/Drugs: We see some characters drinking at parties, etc. Harry appears to be drunk in several different scenes and it even leads him to lash out violently at Peter.

Blood/Gore: We see some deep gashes through Spider-Man's costume exposing bloody cuts on his torso.

Violence: A lot of action/comic book related violence. There are some pretty heavily violent sequences especially a scene where Doc Ock's arms brutally demolish an operating room and the workers inside. Other explosions, cars being tossed, hand-to-hand fighting, etc, take place. Disclaimer: All reviews are based solely on the opinions of the reviewer. Most reviews are rated on how the reviewer enjoyed the film overall, not exclusively on content. However, if the content really affects the reviewer's opinion and experience of the film, it will definitely affect the reviewer's overall rating.