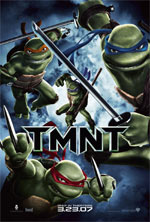 After the defeat of their old arch nemesis, The Shredder, the Turtles have grown apart as a family. Struggling to keep them together, their rat sensei, Master Splinter, becomes worried when strange things begin to brew in New York City. Tech-industrialist Max Winters is amassing an army of ancient monsters to apparently take over the world. And only one super-ninja fighting team can stop them -- those heroes in a half shell -- Leonardo, Michelangelo, Donatello and Raphael! With the help of old allies April O'Neil and Casey Jones, the Turtles are in for the fight of their lives as they once again must face the mysterious Foot Clan, who have put their own ninja skills behind Winters' endeavors. Making this new incarnation of the Teenage Mutant Ninja Turtles truly cutting-edge, the film will be created entirely with state-of-the-art CG animation, giving them a completely new look for the 21st century. (from MovieWeb.com)

Whether dipping into the 80's over twenty years later to revive hot trends from back then is a good idea or not, Hollywood's been doing it like crazy lately - from Garfield movies to Transformers and now bringing back Teenage Mutant Ninja Turtles. Some people enjoy standing on soap boxes declaring "It's all been done before" to discredit sequels, remakes, and the like, but when you notice that 2007 is a summer of sequels (not that there's anything wrong with that), you have to start to wonder.

TMNT is a project that's been long in development, originally being announced as a John Woo project in which we'd see the little shelled heroes of many 80's babies come to the big screen for the first time represented in CGI. I must admit I hardly remember the trilogy of live action Teenage Mutant Ninja Turtles, but the fact that trying to reminds me of Howard The Duck probably isn't a good sign. But bringing the martial arts trained sewer dwelling foursome back isn't a bad idea, really, although the early ads for TMNT suggested as much. But TMNT dares to return the series to the style of the comic book (which, admittedly, I've never read), and a grittier, darker Turtles are represented in this installment.

TMNT's premise reeks of a series of familiar sequels from the get-go. From the Mummy Returns-like intro where we hear Laurence Fishburne tell the story of an ancient villain who is cursed when trying to conquer the world, to learning that our heroes have been reduced to appearing in part at birthday parties after the team had fallen apart, like in Ghostbusters 2. The familiarities aren't bad, but you just kind of feel like you've seen this before and heard it before. You ultimately just want them to hurry up to get to the inevitable moment when the foursome are fighting as one again. But in the tension and conflict that arises from such separation and deconstruction of the team, we're given a different view into the individual brothers' relationships with each other. We get to see the disunity and lack of teamwork and how it affects trying to accomplish something, as well as the problems that commonly run in families with sibling rivalry.

The plot may not be much different than anything you might see in an episode of a weekly cartoon series or a two-part episode (it may be fun to guess where "To Be Continued..." slices would perfectly fit), but the charm of TMNT is actually in its animation. From the beginning, when we're introduced to the human characters in the story, there isn't a lot to be impressed about, but it's the scenery, the angles, the effects, the camera positioning that is intriguing and exciting for such an animated film. The "camera" whirls around in ways only animation can provide. And when a climactic battle occurs on a rainy rooftop, you'll find it's difficult not to smile and admire just what was accomplished in that sequence. The detail and care placed in the expressions, skin textures, and movement of the Turtles is really an achievement in animation. Sadly, the film suffers mostly from a mediocre script that offers primarily weak dialog at best. Only a few scenes will actually generate an honest laugh, while most other attempts at jokes or amusement are dismissable (but it's never as painful to watch as the dialog in Monster House).

Content is something to consider when taking a younger audience into account. The film is enjoyable for adults as well as children, save for the weak and sometimes cheesy dialog, but the dark tone of the film might make things a bit intense for the young ones. The film features many large and ugly monsters that are likely to frighten. Also, it's heavily implied that April O'Neil and Casey Jones live together, which feels strange for an animated film. It's not dwelled on too much, but you have to question the role model status of a character like Jones who admits to Raphael that he's feeling pressured by April to settle down (yet, they live together). Aside from those considerations, the film is just rather violent in action and gritty in execution. It's as if the filmmakers were aiming for the 80's babies but wanted to try to write it for today's kids by inserting burping jokes and the occasional goofy sight gag.

Overall, I felt TMNT delivered as an entertaining animated film. It's not the most well-written I've seen or even the best in the animation department, but it's got enough wowing visuals and enough of an interesting plot to keep you entertained for its 80+ minute running time. And with the voice acting varied from good to forgettable, TMNT kind of has a "good bad movie" feel to it that will likely have you picking out its faults and then realizing you enjoyed it despite them. TMNT is decent enough to hope they return to the screen once again... and with maybe a better script.

Sex/Nudity: It's heavily implied that Casey and April live together while not being married. Casey even complains to Raphael that he's intimidated as to how April is pressuring him to settle down; April is scene in a tight-fitting outfit which causes Casey's jaw to drop and stare; April and Casey briefly kiss passionately; While Mike is on the phone as a tech support rep, he argues with a person on the other end that it's "not that kind of a line" and that he's not leading him on (which could be a dating service reference... or even an adult phone service)

Vulgarity/Language: 1 "d*mn" in a song

Alcohol/Drugs: Winters is seen with a glass of wine

Violence: Lots of punching, kicking, smashing, fighting; The turtles & friends slash up foot soldiers with their swords (not explicit) Disclaimer: All reviews are based solely on the opinions of the reviewer. Most reviews are rated on how the reviewer enjoyed the film overall, not exclusively on content. However, if the content really affects the reviewer's opinion and experience of the film, it will definitely affect the reviewer's overall rating.