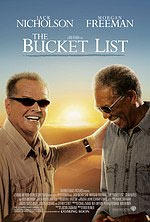 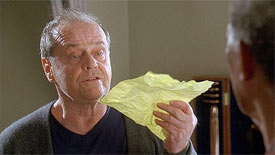 When two cancer patients discover their illness is terminal, the friends head off on a road trip with a wish list, dubbed "the bucket list," of things they wish to do and accomplish before their death.

Buddy films may be a dime-a-dozen these days, but few set out with the purpose and poignancy of stories like The Bucket List. From the get-go, this film opens on a somber note and spends much of its beginning with the two main characters lying in beds in a cancer ward. Through these two strangers' interactions, we start to learn about their personalities and beliefs. Edward Cole, played by Jack Nicholson, is a self-centered grouch who hardly thinks of others before himself, while Carter Chambers, played by Morgan Freeman, is a family man who selflessly gave up his dreams early on in life to raise a family. While the two inevitably get on each other's nerves as soon as they meet, they end up teaching each other a lot about love and life - and themselves - in their last days on earth.

Nicholson's character of Edward isn't a far stretch from his usual grumpy old man character he's been playing these days, while the more nice guy of Carter from Freeman isn't a shift from his usual performances either (actually, it would have been incredible if the roles for these actors were reversed, but I've never liked Freeman in anything but a nice-guy role before anyway). The pair's acting and charisma is what makes the long and melancholy hospital scenes easier to sit through, but it's made clear once their journey outside of their respective beds begins that we're expected to suspend some disbelief as they proceed to skydive, race cars, and globe trot. But it's the character dynamic, the testing of their personalities, and the examinations of one's faith where the film's heart lies. It's not a film for anyone who doesn't like their emotions toyed with or their heartstrings tugged at.

For a movie starring two A-list actors as Nicholson and Freeman, with a director like Rob Reiner behind the camera, it's a surprise to see some of the mediocre special effects that the filmmakers try to pass off in the film. These of course begin when the two leap out of a plane and their heads are superimposed over the faces of real skydivers. It's a cheesy effect that never looks real enough to buy and is something that probably could have been done differently and more effectively. From there, we see some truly beautiful scenery, while other times it seems unnecessary to have used green screens to transport our leads to a distant land. Buying that two ailing old timers made it to the top of pyramid ruins is one thing, but when it's pretty obvious they're not really standing in front of the Taj Mahal, you have to wonder why either a different tangible location couldn't have been approached, or they couldn't have just filmed outside of it. One can argue that this effect gives this buddy film a bit of a classic film feel, when most everything would be filmed on a studio backlot, but when a movie like this has plenty of language and questionable material, it tends to lose any classic feeling. 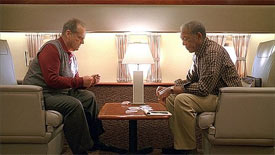 Content is indeed iffy. Nicholson uses the "f" word when arguing with Freeman in one scene, while he uses a good amount of blasphemy and other forms of profanity throughout the movie (Freeman does join in on occasion). Edward has relatively lax morals and in a scene, he encourages Carter to cheat on his wife or even participate in some kind of orgy, which Carter obviously refuses. Another scene implies that Edward fools around with a flight attendant as we see her walking out of the same bathroom before him. Violence is mild, but the theme of death is a heavy one. The hospital scenes involving the two men are no picnic, and we see Edward's surgery scar as well as him having coughed up some blood into a handkerchief, and later see some blood on Carter's shirt (from an opened catheter). With everything included, The Bucket List earns every bit of its PG-13 rating, and doesn't qualify in any sense as a family film.

Freeman's character Carter does bring faith into the equation, and it makes for some interesting discussions between Edward and Carter, however, aside from thoughts on God, the Egyptian and Buddhist beliefs are also mentioned. But it was also nice to see Carter's family saying grace in one scene and banding together in prayer in another. Considering how Hollywood is often so resistant to talk about God, it's a great change to see faith make it into the fold of this film.

The Bucket List is an entertaining and more so sobering look at a person's life, how it affects others, and what kind of legacy one might leave when their gone. It offers a great message about living in the moment and seizing the day, something we all can apply to our own lives. Content is murky with an assortment of profanities as well as a few sexual references, so it's a tough recommendation. Also, some tighter direction could have really made this a stronger film. At times, certain plot elements seemed to be passed on too quickly, or we're just expected to accept something that's a bit too hokey. Still, it doesn't hurt the film's overall theme and message, giving a lot for the viewer to ponder after the film's end.

Sex/Nudity: When Carter mentions he's only ever been with his wife his whole life, Edward comments that they need to fix that and Carter refuses. Edward then somewhat jokingly says they should have a big orgy; While racing, Carter makes a suggestive taunt to Edward, who replies, "Did you just make a penis reference?"; While on a plane, we see Edward open the bathroom door and peek out to find everyone asleep. A flight attendant then walks out of the bathroom, buttoning up her blouse as she walks (nothing is seen). He sneaks back to his seat and finds Carter just looking at him. Edward replies, "Medicinal"; A young woman at a bar talks with Carter for a bit before asking if he'd like to come up to her room. He pauses in disbelief, possibly pondering the thought, before declining and saying he has a wife; After emerging from the bathroom, Edward tells his assistant a couple things he's learned in life, including "never waste a hard-on"; We see Edward looking out his window, crying, while two young women can be seen in the glass's reflection sitting on a bed behind him. They comment on how he's usually fun and are wondering if he's crying, but nothing further happens as the scene ends there; Carter and his wife go in their bedroom to have sex, and she slips into the bathroom to change into lingerie. Carter fiddles around the room, unsure where to sit himself down, and she emerges in a long, slightly see-thru lingerie piece (it's tough to tell whether there's anything underneath). We only briefly see her as the scene ends there before anything else happens

Alcohol/Drugs: Carter and Edwards drink wine with their meal; Edward talks about his daughter's husband who would get drunk and hit her; Carter and a woman order drinks at a bar in Hong Kong

Blood/Gore: Edward is seen coughing in court and he puts a handkerchief up to his mouth and when he pulls it away, it's stained with blood (and we see some blood on his mouth); We see a nasty scar on the side of Edward's head a few times after surgery; Edward is seen getting a tattoo and we see a little bit of blood on his arm from the needle; We see that Carter's shirt is bloodstained after his catheter cap popped off accidentally

Violence: Carter playfully bumps his car into Edward's as they race on a track; Edward angrily beats a package of food he can't get open Disclaimer: All reviews are based solely on the opinions of the reviewer. Most reviews are rated on how the reviewer enjoyed the film overall, not exclusively on content. However, if the content really affects the reviewer's opinion and experience of the film, it will definitely affect the reviewer's overall rating.