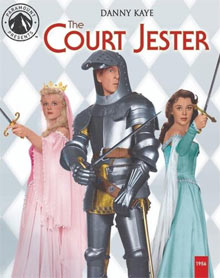 Danny Kaye is kind-hearted entertainer Hawkins who disguises himself as the legendary king of jesters, Giacomo. Hawkins infiltrates the court of an evil villain (Basil Rathbone), but when a sorceress hypnotizes him, royal chaos ensues. Alternating identities at the snap of a finger, between swordplay and wordplay, Kaye's comic genius shines through. The stellar supporting cast includes Glynis Johns, Angela Lansbury, Mildred Natwick, Cecil Parker, and John Carradine. (from Paramount Pictures) 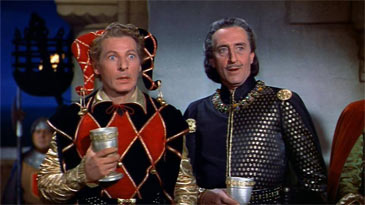 Nearly every Christmas season, it's a must for me and my family to watch White Christmas. When Danny Kaye's name is mentioned, it's the first film that comes to mind. I loved watching Bing Crosby team up with Bob Hope for the series of movies they once did, but still my favorite film for both Crosby and Kaye is that holiday favorite. Kaye's silly antics are often an acquired taste, but the man was no doubt a tremendous talent; he could sing, dance, act, do comedy, romance, and even drama. But like Hope and (probably) Crosby, Kaye is most known for his comedic talents. He was as versatile as they come. And that is why his 1956 film The Court Jester works so well.

The Court Jester is a musical comedy that centers around a performer named Hawkins who is part of a rebellion lead by a Robin Hood-like hero called the Black Fox. The king of their kingdom claimed the throne but is not the rightful heir. Instead, a newborn that bears the mark of royalty on his bum is the rightful ruler, and the Fox and his team hope to sneak the baby into the castle to establish him where he belongs. To infiltrate the castle, Hawkins poses as a new jester, named Giacomo, and hilarity ensues as he catches the eye of the king's daughter Princess Gwendolyn (Angela Lansbury), and the scrutiny of the villainous Sir Ravenhurst (Basil Rathbone). Kaye proves more than up to the task as comedic and swashbuckling leading man, and I couldn't help but be truly impressed by his performance here.

Versatility in actors isn't as entirely rare as some make it sound, but Danny Kaye really was something extraordinary. There's a sequence where the princess's handmaiden Griselda hypnotizes Hawkins to believe he's the dashing, confident, hero that Princess Gwendolyn is looking for. She initiates the transformation with the snap of her fingers and Kaye goes from bumbling fool to swashbuckling hero. At one point, while hiding behind a curtain, the king and Princess Gwendolyn exchange heated words, which leads to the two snapping their fingers at each other back-and-forth. Kaye switches characters at a drop of a hat and it's mesmorizing to watch him do it. Later, this happens during a sword clashing duel with Ravenhurst and it's even more impressive to watch Kaye do this WHILE keeping up a sword fight. It's fantastic. 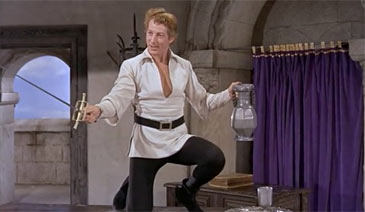 The rest of the cast is also quite good. I watched a lot of Murder, She Wrote as a kid because my mom loved that show, and it was fun seeing Angela Lansbury as a young princess here. Also, Glynis Johns, who is most recognizable as Mrs. Banks in Mary Poppins, is lovely here and a great romantic interest for Kaye. Sherlock Holmes himself, Basil Rathbone, is perfect as the villain, and he is able to revisit his villainous role from The Adventures of Robin Hood here. I'm not a huge fan of musicals myself, but as I've gotten older, I've come to appreciate many of them more than I did when I was younger (although, admittedly, I tend to skip over some musical numbers when I'm viewing movies at home... especially the non-Christmas performance songs later in White Christmas). It's still not a preferred genre, but movies like La La Land work for me more than I'd expect for them to. The Court Jester isn't exactly Into the Woods, where the singing and dancing is seemingly nonstop, but Kaye has a few numbers in the film, and they're all a lot of fun. His little lullaby for the baby king, with Glynis Johns's Jean looking on in wonderment, is a such a great character moment, too. (This is also when she finally realizes she loves him.)

While it's not rated, I'd say the content for the film is more of the PG variety. The violence is bloodless and often mild, but one of the opening moments shows a man being knocked off his horse with an arrow to the back. There is some slapstick humor - like the king and Gwendolyn both repeatedly kicking Giacomo to get him to either stop or start singing - but the finale has a little more violence when there's a battle at the castle. There's no inappropriate language, but there is some sensuality here and there. Griselda tries to convince Giacomo to go after the Princess and repeatedly tells him to "make love to her!" (But I'm pretty sure it doesn't quite mean as intimately as we assume it usually means these days.) Also, the king presses Giacomo to find him a woman, and Giacomo, under Griselda's spell, accidentally offers up Maid Jean to the king. So while the content is mild, some of the themes are a little more adult than one might expect if they want to watch it as a family.

Paramount Pictures brings The Court Jester to their new Paramount Presents line (it's like their version of The Criterion Collection), in which they've newly restored the movie in a special 6K scan of the film. It looks vibrant and crisp, and I can say confidently that they did an incredible job reviving this classic. If you're a fan of the film, I highly recommend getting this release of it.

Overall, I was really impressed by The Court Jester. I'd definitely call myself a casual fan of Danny Kaye's work, and I think this film is one of his best. If you like old movies, especially the Robin Hood-type adventure films of the golden age of cinema, then you won't want to miss The Court Jester.


The Court Jester is now available on Blu-Ray (and Digital HD) in this beautifully restored new scan. Along with the feature film, a Theatrical Trailer, and a Digital HD code, there's one bonus feature:

Filmmaker Focus: Leonard Maltin on The Court Jester (7:03) - Film critic and historian Leonard Maltin talks about the history of the writers who penned The Court Jester, the main actors in the film, how it came together and how it has endured. He also shared that the movie had a budget of almost 4 million, which was a lot back then!

Sex/Nudity: Princess Gwendolyn has a low-cut dress that shows some cleavage in most of her scenes; Hawkins flashes a baby's buttock repeatedly to show a tattoo to men who kneel before it; Jean shows cleavage in her dress. Her attractive appearance catches the eye of Hawkins, who tries to compliment her; Jean and Hawkins lie down on straw in a barn where they intend to innocently sleep beside each other. They talk and flirt a bit until they kiss passionately and jump up from the hay. She tries to resist him and he keeps kissing her neck, exposed shoulders (in the dress), face and mouth. They're interrupted before anything else might happen; The king talks to Hawkins about wenches and that he wants one brought to his room (because he believes the jester must have "experience" as a ladies man); Griselda tells Giacomo repeatedly to "go make love to" the princess; Under Griselda's influence, Giacomo kisses the princess all over her hands and body and mouth.

Alcohol/Drugs: Three men drink from chalices and collapse dead over the banquet table; Giacomo and Sir Griswold are supposed to drink from chalices as a toast, but never do; At one point during their duel, Giacomo picks up a pitcher of something on a table, much to Ravenhurst's disgust, and drinks it.

Violence: A man is hit in the back with an arrow and falls off his horse (No blood, but we see it sticking out of his cloaked back); Two men fight with swords till one knocks the sword out of the other's hand; Jean knocks out the real jester with a piece of wood, which we see in shadow off screen; Three men drink from chalices and collapse dead over the banquet table; The king and princess keep kicking Hawkins as he sings; Sir Griswold slaps Hawkins repeatedly till he falls over. Hawkins then slaps him with a glove repeatedly and then hurts his hand on his face; While training, we see Sir Griswold punch through a shield; Sir Griswold and Giacomo swing maces at each other while on horses and knocks Giacomo's helmet off. It looks like he's been decapitates, but we then see his head peeking out of the armor; Some of Hawkins' little friends come to the rescue and we see them attacking the soldiers in the castle. We see a row of shields swing down and knocks soldiers over as a fight breaks out; As the little people defeat the bad guys, they drop them into a catapult that launches the soldiers over the castle wall into the water below; Jean clubs a guy in the head; Ravenhurst and Giacomo have a sword fight on the wall of the castle and Giacomo bites his hand. The two keep fighting and pushing each other in a long fight around the castle. At one point, Giacomo tweaks Ravenhurst's nose. And the two slice things around the room with their swords, like table tops and candle sticks; Giacomo grabs a man and flips him onto a catapult and he's launched over the castle wall into the water below. Disclaimer: All reviews are based solely on the opinions of the reviewer. Most reviews are rated on how the reviewer enjoyed the film overall, not exclusively on content. However, if the content really affects the reviewer's opinion and experience of the film, it will definitely affect the reviewer's overall rating.