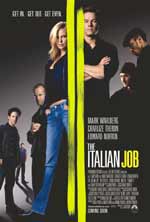 - for violence and some language. 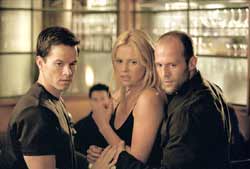 The plan was flawless... the job was executed perfectly... the escape was clean. The only threat mastermind thief Charlie Croker (Mark Wahlberg) never saw coming was from a member of his own crew. After pulling off an amazing gold bullion heist from a heavily guarded palazzo in Venice, Italy, Charlie and his gang can't believe it when one of them turns out to be a double-crosser. Now the job isn't about the payoff, it's about payback!

Ah, heist movies. Gotta love heist movies. What is it about watching people delicately plan an immoral theft of property that makes for good entertainment. *shrug* I certainly don't know, but it often does! In 2001, the remake of Ocean's 11 was released, and was a cleverly written and directed heist picture that I'm sure encouraged this remake of a 1969 film to be made. Mark Wahlberg fills in the shoes of Michael Caine's role from the original, making this at least three lead roles in remake films for Wahlberg (Planet of the Apes, The Truth About Charlie - originally Charade, and this film). I admit I've never seen the original, but Wahlberg seemed perfect for this role as did each of his costars. And although I'm sure Charlize Theron was mainly cast to beautify the silver screen, her character was perfect and she did a great job fleshing out Stella's personality. While the film may have benefited from more time being spent on the backgrounds of their characters (much like how Soderbergh handled Danny Ocean and Tess in Ocean's 11), The Italian Job worked well with the material it offered. Another way the film may have benefited greater, would have been the further development of Norton's villainous character Steve and his relationship with the team before he turned on them. It may have made the moment he double-crosses the team offer greater surprise and have a greater impact. 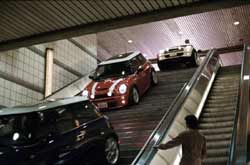 In the content department, The Italian Job is messy but not a complete loss. While a few uses of blasphemy are present as well as a pointless use of the "f" word (is there ever a good point? Nah.), language is moderate but the filmmakers use it sparingly. Violence is present with only one brief glimpse of a dead man with blood on their mouth being the extent of the gore content. Sex is kept to a minimum with a few minor references and an instance of sex being implied when we see a character wake up next to a woman he sleeps with in order to steal a uniform from that they need. The film keeps its focus on the characters and the heist operation without tossing in too much completely irrelevant tripe.

All in all, I found The Italian Job to be an entertaining outting at the movies. The idea of theft and robbery is completely immoral and sinful, so take the movie as nothing more than a story. With that said, you'll want to leave the kiddies home for this one. And if you'd feel more comfortable, we highly recommend waiting till it's on DVD to watch it edited with the ClearPlay program or something similar to omit the offensive material.

Sex/Nudity: Few minor comments / references are made; Handsome Rob seduces a woman so he can steal her uniform and vehicle and so the next morning we see him roll out of her bed in his boxers (she's in her underwear or nightwear); We briefly partially see Stella in her bra.

Alcohol/Drugs: Some people have drinks / toast each other

Blood/Gore: We see a dead man with some blood trickling from their mouth and a few bloody spots on their shirt after being shot

Violence: We see a man shot to death and a van go over the side of a bridge into water; Cars crash into each other at intersections when traffic lights malfunction; A man is shot to death; A man punches another man; A person punches a man, etc... Disclaimer: All reviews are based solely on the opinions of the reviewer. Most reviews are rated on how the reviewer enjoyed the film overall, not exclusively on content. However, if the content really affects the reviewer's opinion and experience of the film, it will definitely affect the reviewer's overall rating.