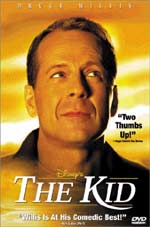 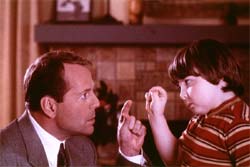 Russ Duritz (Bruce Willis) is a jerk. He's going to be 40 years old and is an insensitive image consultant. He didn't grow up the way he wanted to and others around him know he needs a change. Enter Rusty Duritz, Russ' 8 year old self from 31 years prior. While Russ doesn't know why Rusty's there, and Rusty doesn't know why he's there, the 2 set out to change their life for the better.

This was a movie I just had to see. I mean, c'mon, how many family movies does Bruce Willis make?! But I had no idea when I was going into the theater what I was in for. I found Disney's The Kid to be an instant classic. The way movie's USED to be made long ago. The way movies should be made now! It was funny, touching, and had lots of heart. But one problem... who's the audience?!

The funny part about this movie is... it's not really for kids. Sure it's wholesome, sure there's no swearing (Bruce, how'd you manage that?!), sure there's an 8-year old kid in it, but wasn't there a little kid in last year's PG-13, Big Daddy? The more I think about it, 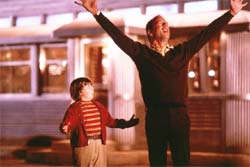 the more I realize... there's no great reason for The Kid to be PG instead of G!

This movie had me the whole way through. Didn't lose ya for a second. However, the little kid (maybe 9 years old?) next to me started squirming half-way through and even mimicing the lines towards the end of the movie. I really felt for the characters and it even made me think about my life and even though I'm just 20, it made me think about how I would like my life and how what a kid wants when he's 8 is different then how his life will be when he's 40 (OR even 20).

I was really impressed by how well-done this movie was. The acting was good, there was very little if any offensive material (see below details), and I just found it to be a nice refreshing outting at the movies.

Overall, it was really really good. A must-see for families with kids who aren't any younger than 10 or 11, and a movie for adults probably more-so. I grant this fun and touching family film a 4.5 out of 5. If you have any questions or comments about the film before you see it, feel free to contact me.

Sex/Nudity: 1 or two highly minor references. One is about Rusty asking what a "hickey" is (while Russ doesn't tell him). Russell tells his psychiatrist he's "seeing" a man in an airplane (meaning he keeps seeing it fly around him), but she thinks he means it in a homosexual way (he doesn't).

Alcohol/Drugs: Some drinks on a plane and at a resturant

Blood/Gore: Rusty has a little bit of a bloody nose after a fight while a bully has a slight bloody lip

Violence: Rusty gets into a fight with a school bully, Rusty accidentally kicks Russ Disclaimer: All reviews are based solely on the opinions of the reviewer. Most reviews are rated on how the reviewer enjoyed the film overall, not exclusively on content. However, if the content really affects the reviewer's opinion and experience of the film, it will definitely affect the reviewer's overall rating.