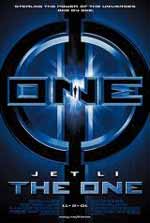 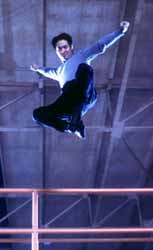 With the existence of multiuniverses-- not just one, each universe contains a different version of yourself. Gabriel Yulaw is from one such universe, travelling to each universe he can to eliminate each version of himself. With each death he gets physically stronger, faster, and smarter. This brings him to the final version of himself he must kill, Gabe Yulaw, a policeman. If he completes the task, he will be "the one," believing he will be God-like. Two agents from his universe follow him with the goal to take him out. But will Gabriel get to Gabe before this happens?

Interesting concept. But like one review I read on 2001's The One, the film just didn't go as far as it should. It was too fast-paced, too flat, and too shallow in the depth it could have gone with its unique plot. The supporting actors -- mainly the agent who covers Gabe, is so ridiculously portrayed, you wonder how he even made it into acting. The directing was poor, and it was an American-made film. While most films like this would normally be foreign, it wasn't, yet had a strong foreign feel to it. Jet Li did an excellent job with what he had to work with, but that certainly wasn't much itself.

Swearing was moderate but unnecessary. Several uses of the "s" word, some other colorful phrases, and some possible swearing in music played in the background which was hard to make out. The music in the movie was quite irritating and didn't fit. While when the music was instrumental it almost fit, but the inclusion of hardcore/heavy metal secular tunes complete with vocals detracted from the theatrical feel. It almost came off more like a video game or music video. Violence is extreme but non-graphic with frequent martial arts related fighting, with the addition of shootings (often resulting in death). A lot of hand-to-hand combat with blood very rarely seen, and if used, it's used minimally.

Redeemable qualities of the film? Well, although characters were often flat and useless, Jet Li's more compassionate and down-to-earth Gabe was easy to watch, along with his caring and troubled wife, T.K. Some of the action sequences, although nothing entirely amazing or captivating, are often entertaining enough. With Gabriel having such exaggerated strength, it was interesting watching him be able to wield a motorcycle in-hand like most would wield a stick or pipe. And with time being controlled by Li's characters, a lot of Matrix-type technology is utilized, with him often dodging bullets or striking a character frozen in mid-air.

The One is no theatrical masterpiece. It was an entertaining offering of martial arts and sci-fi mayhem, but I must admit it was executed in an efficient way. Mediocre, yet decent, The One is good if you're not expecting much and would like an hour and a half of mindless entertainment. - John DiBiase (reviewed: 11/16/01)

Sex/Nudity: Two random guys in a morgue refer to some minor sexual stuff briefly before being interrupted.

Violence: Excessive violence: kicking, shootings resulting in death, punching, tossing people around, explosions, collisions. Disclaimer: All reviews are based solely on the opinions of the reviewer. Most reviews are rated on how the reviewer enjoyed the film overall, not exclusively on content. However, if the content really affects the reviewer's opinion and experience of the film, it will definitely affect the reviewer's overall rating.