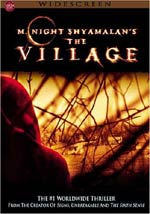 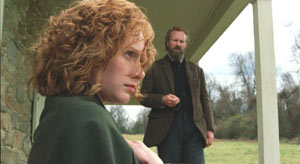 In M. Night Shyamalan's The Village, the Academy Award-nominated filmmaker, who brought you The Sixth Sense and Signs, assembles an all-star cast, including Joaquin Phoenix and Sigourney Weaver and Academy Award-winners Adrien Brody and William Hurt, to bring to the screen the thrilling tale of an isolated village confronting the astonishing truth that lies just outside its borders. At first glance, this village seems picture perfect, but this close-knit community lives with the frightening knowledge that creatures reside in the surrounding woods. The evil and foreboding force is so unnerving that none dare venture beyond the borders of the village and into the woods. But when curious, headstrong Lucius Hunt plans to step beyond the boundaries of the town and into the unknown, his bold move threatens to forever change the future of the village. (from MovieWeb.com)

No matter how many ways you slice it, M. Night Shyamalan is an extremely talented and often genius director. He has been writing and directing his own films for years, first gaining momentum with The Sixth Sense and since getting more and more renowned with films like Unbreakable and mega hit Signs. Shyamalan offers his own brand of psychological thrillers that keep profanity to a bare minimum, a reduced amount of graphic violence, and virtually no sexual content. Instead, M. Night pulls the strings of your mind, tossing all kinds of imagery and hints towards the discovery of the truth in all of his stories. And the films rely heavily on character development than anything. We're introduced to various characters and through paced and relaxed scene development, the end result is unique to M. Night alone.

The Village is Shyamalan's latest theatrical effort. It tells the story of a small Amish-like community that had settled near a forest inhabited by menacing creatures. The townspeople live in fear of these creatures but feel coexisting on the same land is possible. Once again, the audience needs to forget what they expect the movie to be like and go into the film open-minded. For Unbreakable, viewers couldn't see past the bizarre twist in the overall storyline from what was proposed from ads and ultimately hated the film. Story wise, Unbreakable was a brilliant idea, unique in a lot of ways, but perhaps too different for most contemporary audiences. 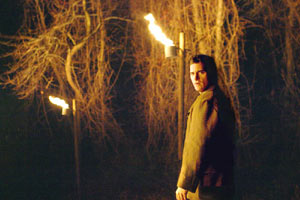 The content of The Village is perhaps the mildest of all of M. Night's films. While Signs was probably a little less violent, it had some mild profanity while Village has next to nothing. Village contains a few disturbing images, specifically the sight of a number of skinned animals as well as a surprising and emotional scene where a character is stabbed (with a lot of blood seen on the knife and on other's clothes).

The Village is not for everyone. I left the theater somewhat disappointed, but upon greater pondering of M. Night Shyamalan's storytelling, I appreciated it more. It's a well thought out plot and story and I enjoyed piecing the puzzles of the mystery together as they unfolded and well after we left the theater. A lot of people won't enjoy the film's overall development, expecting a different kind of film, but that is to be expected from an M. Night flick by now. From the opening scene, Night is already leaving clues, and even if viewers figure out the film early on, there are plenty of twists and details to fill in the gaps. The Village, like Signs, has some genuinely funny moments, too. Some may find a few of these moments campy, but given Shyamalan's approach in Signs, my guess is the lightheartedness displayed from time to time is intentional, if not a means to relieve some of the tension from the moviegoers.

The acting was superb. While some of it may seem awkward or even wooden at times, it fits with the storyline and the kind of characters these people are. The film-stealer, however, is Bryce Dallas Howard, renowned filmmaker Ron Howard's daughter. Bryce brings a lot to her character of Ivy. She's down to earth, compassionate, brave, and probably the most believable and realistic character. If this film does anything, it will launch Bryce's career for sure.

I enjoyed The Village and M. Night's vision for the film. It wasn't what I expected, but it was yet another smart piece of filmmaking from Night. This is not a film for young ones (and it shocked us to hear kids in the theater), so do be smart and not take the little ones along. Violence and the intensity of the story are the only real considerations, so you may want to read about it below before deciding to go. - John DiBiase (reviewed: 7/31/04)

Blood/Gore: The villagers are seen gathered around a dead and skinned animal with flies buzzing around it. We later see another skinned animal with flies around it. Villagers return to their homes following a party to find more skinned animals lying around and even hanging from their doorways. A few men toss a bloody piece of meat (possibly the severed leg from a cow, we see the severed end) into the woods to offer to the creatures. We see a person look down at their stomach as another person suddenly (and surprisingly) is pulling a knife out (the knife is dripping with blood). The victim falls to the floor and the attacker then stabs them again (before the camera turns away), and possibly more times. We then see the attacker with blood covering their hands. Later we see a couple views of a woman with blood from the victim on her clothes. We see a man dying with a little bit of blood on their face and in their mouth.

Violence: A character runs around hitting people with sticks (thinking it's funny); We see various skinned and dead animals during the film; A character stabs another character a couple times; A person smacks another repeatedly; etc... Disclaimer: All reviews are based solely on the opinions of the reviewer. Most reviews are rated on how the reviewer enjoyed the film overall, not exclusively on content. However, if the content really affects the reviewer's opinion and experience of the film, it will definitely affect the reviewer's overall rating.