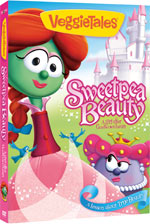 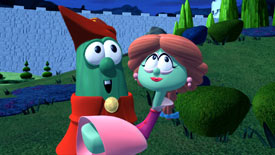 Once upon a time, there lived a royally sour blueberry, a fair rhubarb maiden and a dastardly deceptive mirror! Sweetpea Beauty knows that whats on the inside is what matters most, but insecure Queen Blueberry cant see past her own reflection! So, when a decree is handed down that only the most beautiful can rule the land, the Queen gets nervous and things turn ugly! Banished to the dark forest, Sweetpeas fate seems bleak until a charming prince, a band of merry minstrels and seven snow peas come to the rescue! Will Sweetpea and her friends be able to warn the Queen in time to save her from the clutches of the tricky mirror  or will the crumbling kingdom and the Queens own heart be lost forever? Find out in this fairy "Veggie" tale about the real meaning of true beauty.

Plus, the almost-classic tale of...Snoodlerella. A self- conscious Snoodlerella is the star of the ball after getting an extreme makeover. Her life of glamour is short-lived as the clock strikes midnight and her glasses, braces and insecurities return. Will she be able to see herself as the good King sees herunique, beautiful and perfect just the way she is?

For the latest VeggieTales installment, the Big Idea Productions team bring a special edition aimed particularly at girls - a first for the popular family show. VeggieTales: Sweet Pea Beauty tackles the topic of beauty and outward appearance that girls especially struggle with, while using Larry's own self-consciousness in this episode to make the story also relatable to boys as well (who often struggle with their appearance - not being "cool" enough or handsome enough - almost as much as females do). The episode opens in the veggies' kitchen where Larry is trying on different hats in an attempt to find something that will help him feel better about himself. And when the gang's trusty computer friend Qwerty introduces them to a fan asking about the subject of beauty (yes, Qwerty is given a voice for this episode for the first time... which actually seems to take away from the computer monitor's charm a little bit), Larry and Petunia turn the episode over to Bob who begins to narrate the first tale, Snooderella. 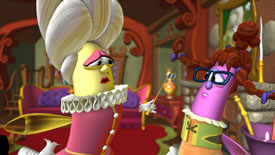 Snooderella takes the familiar story of Cinderella and gives it not only a VeggieTales twist, but a Seussian feel as the world of Snooderella looks like it was lifted from the page of a Dr. Seuss book. In it, we meet the rather plain Snooderella who is transformed by a "berry" godmother into a beautiful princess who dances the night away at a royal ball. But when the clock strikes midnight and she turns back to her brace-clad teeth and out-of-control hairdo, she feels ugly all over again. Luckily, the King shows up and assures Snooderella that she is truly beautiful because he made her that way. It's a nice way to tie in God's image of his children through the love of King Snoo.

Before we get to the feature story, a new Silly Song titled "Pants" serves as an interlude. In it, Larry is on the Veggie Shopping Network trying to sell pants to his vegetable kind in yet another truly funny, truly memorable silly song. Not surprisingly, All Star United front man and acclaimed producer Ian Eskelin is a cowriter on the song (and performs the voice of the dancing pants). It's one of the best silly songs to come along in awhile.

The main story brings back Madame Blueberry as the very insecure and vain Queen Blueberry, who is entirely absorbed in trying to be the most beautiful person in the kingdom. When she awakens a magical mirror, it tells her that the most beautiful person in the kingdom is actually a young girl named Sweetpea Beauty, who is considered so beautiful because of her heart. Sweetpea finds God's wonder and majesty in even the most smelly or unappealing things (her closest woodland friend... is a skunk!) and her charm begins to rub off on the kingdom's prince (wonderfully played by Larry The Cucumber). But soon, the mirror begins to reveal an agenda of his own and the entire kingdom becomes threatened due to the vanity of the Queen. 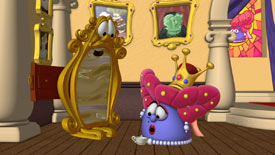 As always, the VeggieTales team successfully parodies well known stories and characters, and Sweetpea Beauty makes reference to Snow White, Goldie Locks and the Three Bears, and Sleeping Beauty. Snooderella played things mostly serious throughout its story (except for maybe the dance sequence), but Sweetpea Beauty enlists some wonderful comedic moments from the Seven Snowpeas and a pair of singing minstrels who even provide vocal thematic accompaniment for the final action sequence. It's classic VeggieTales schtick!

The only thing that really seemed to detract from the Sweetpea Beauty experience was the animation quality. The previous feature, Pistachio offered some of the most impressive animation to come out of the Big Idea Productions team yet, with wonderful shadings and renderings throughout. Sweetpea Beauty, however, bears a look and feel that seems maybe even a little unfinished. It's not bad by any means, but compared to the previous episode, there is a significant enough difference that it was even a bit distracting. Regardless, I highly doubt the junior VeggieTales fans will notice or care, but it was obvious enough to come as a surprise to me. Hopefully this Fall's It's A Meaningful Life will look a bit more dazzling like Pistachio did.

That visual nitpick aside, Sweetpea Beauty is a family entertainment gem that will especially speak to any little ladies in your family. And who knows, it just might speak to the moms and even some of the little men as well. Props to Big Idea for tackling yet another important lesson for life - and doing it well! (Side note: CCM music fans may also be delighted to see the return of Nichole Nordeman to music with a brand new featured song during the credits of the film, entitled "Beautiful For Me.")