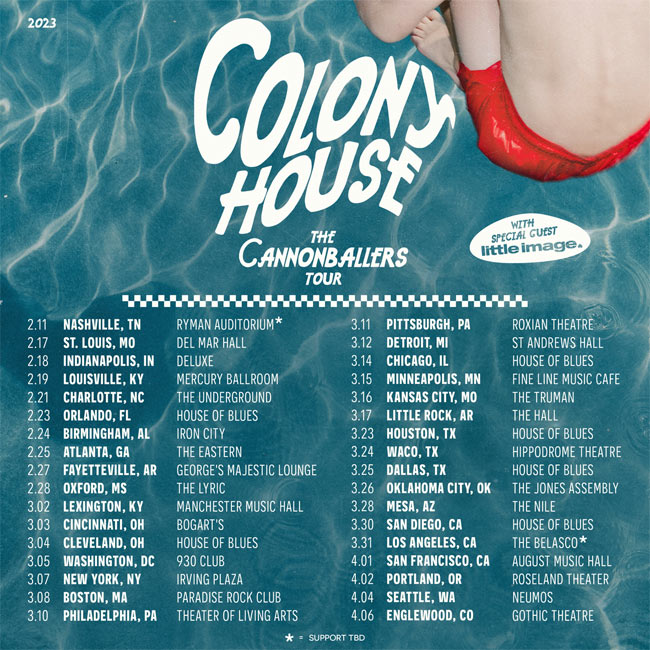 (New York, NY) Nashville-based rock band, Colony House, has announced a nationwide headlining tour in support of their fourth full-length studio album, The Cannonballers, out February 3rd, 2023. The tour will kick off on February 11th, with a hometown show at The Ryman Auditorium. Tickets to that show are now available HERE, and the rest of the shows will be on sale Friday, 10/28 at 10 AM local time.

Adding to the excitement is the premiere of the new video, “Landlocked Surf Rock,” an apt description of the band’s signature sound and a tribute to their home state of Tennessee. The video features an intro by legendary country writer, and subject of the movie, Love, Tom, Tom Douglas. WATCH HERE.

Frontman Caleb Chapman was inspired to write the songs that became The Cannonballers while being locked down at home in 2020. “The pandemic was the first time since high school that I had been off the road for an entire year. We got to see the seasons change and experience our home again for the first time in a long time,” he says. “I think I was falling back in love with Tennessee and realizing how special it is to be born and raised in such a beautiful place.”

Comprised of Caleb Chapman (vocals, guitar), his brother Will Chapman (drums), Scott Mills (guitar), and Parke Cottrell (bass), Colony House has continued to unite fans under its banner of hope and light in a world that feels more divided every day. The band has performed on Late Night with Seth Meyers and CONAN, as well as The Today Show, VH1’s “Morning Buzz,” and MTV Live, as well as at festivals including Shaky Knees, Austin City Limits, Firefly, WonderBus, and Lollapalooza.

Colony House’s 2014 debut, When I Was Younger, included the instantly popular single “Silhouettes,” which became the #1 most-played track on Sirius XM’s Alt Nation for four months straight. Their sophomore album, Only the Lonely, included the surf-rock hit, “You Know It,” which reached mega-viral status on Tik Tok, vaulting it to over 100 million streams. The band’s third effort, Leave What’s Lost Behind, was released in January of 2020, before they were forced to pause alongside the rest of the world. During that time, they produced and directed a full-length feature film, Everybody’s Looking For Some Light, which was an official selection at the Nashville and Knoxville Film Festivals, and debuted at a two-day drive-in event at Greystone Quarry in Franklin, TN. Last year saw the release of Colony House Live, Vol. 1, and the EP, Rotten Tomatoes. In support of that EP, they were able to return to the road, headlining 45 dates in the US before their first overseas headline tour in 2022.

The Cannonballers drops on February 3rd, 2023, and is now available to pre-save. Colony House will be touring throughout the spring in support of the album. Visit colonyhouse.com/tour for more information and tickets.

"The Tennessee quartet’s new material builds on the bold and vibrant sound they’ve become known for... inspired by the isolation of a time where they should have been touring its predecessor, as well as falling back in love with where they’re from."
- FLOOD Magazine