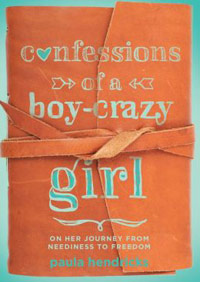 Paula Hendricks
Confessions of a Boy-Crazy Girl: On Her Journey From Neediness to Freedom

In the world of writing, we have a saying: Write what you know. For the beginning writer, this is some of the best advice to give or receive (although it may not seem like it at the time). Writing what you know leads one into more and more "dangerous" and "unknown" territory, and each step into the shadowlands broadens the writer's perspective until they see only what they need to know, and sometimes, more or less than that. Confessions of A Boy-Crazy Girl: On Her Journey from Neediness to Freedom by Paula Hendricks is the admitted first step for Hendricks in the direction of being considered a professional.

The book opens with Hendricks baiting the reader. She drops little hints and tidbits cluing us into the next chapters of her life in the "journey from neediness to freedom." Intermingled with her story and experiences is Scripture and meditations on how idols of every sort tear down Jesus and replace Him with themselves, and included at the end of each chapter is what's called "Your Journal Corner," where Hendricks asks questions and starts opening the way for the reader to get personally involved with the book. Unlike most self-help-type books, Confessions is easy to read and never contrived or arrogant.

Hendricks began writing on a blog with a topic equivalent to the book before she was discovered and recruited by Moody Publishers to turn her story into a manuscript. In Confessions, she draws from her personal experience in being "boy-crazy," and this serves for her as both a weakness and strength. In the latter, she knows what she's talking about. In the former, she knows what she's talking about. This repetition may seem strange and unwarranted. However, when viewed with experienced eyes, the differences become perfectly clear. She does know what she's talking about, so everything she says has heavy sway in the credibility department. The inverse is this: She knows it so well, she uses as few words as possible to relay the message. That is not an advantage for this book.

There are moments within the literary sphere--despite medium and type--where "brevity is the soul of wit." The word "wit" can be replaced with any word relevant to the piece. For Confessions, this rule is not adhered to. Nor is the rule bent to the point of splintering in a creative way that makes you sit back and say, "Oh, I see what you did there. Bravo." Hendricks frequently, and frustratingly, alludes to many, many examples of how her love of boys trumped her love of God. I would like to say that once, maybe, she described what it did to her personally. Frequently, she relays her sad stories of heartbreak, sadness, and tears; all-too infrequently she describes the emotional, mental, and spiritual scarring and damage the on-and-off attractions wreaked on her. She describes one especially-terrible experience as a "severe mercy." The furthest she goes to tell us how she felt in her utmost core is that it was a terrible, dark time. While I cannot begrudge her honesty, I call her out on her failure to connect viscerally with readers.

Hendricks' thoughts, ideas, feelings, and revelations are of the utmost importance in a materialist, codependent society such as our own. The manner in which she bares her soul makes this fellow writer stand and applaud. This fellow writer, as well, though, would have liked to connect more with her. Bleeding onto the keyboard/paper takes much practice and many hard moments of insecurity. I believe deeply, though, that Hendricks is capable of such connection with her audience--a connection that reaches out, finds your sore spot, punches it, and then offers the most soothing painkiller possible for the moment. Should Hendricks learn this technique of ink-blood transfusion, and I have no doubt she will, then her next endeavor will skyrocket into the ionosphere.