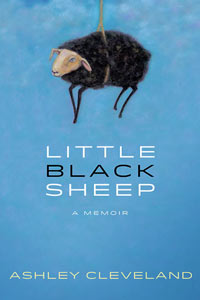 From the moment I could sound out words, I've been reading most anything I could get my hands on. Memoirs are something, though, that I've tried my hardest to avoid because, more often than not, the author takes too much time getting to the point or begins to sound very egotistical about their life story. Little Black Sheep by Ashley Cleveland was offered to me as an Advanced Reader Copy for review, and despite it being the genre I've been wary of, I decided to give it a try. I didn't know what to expect, but I certainly didn't expect what happened.

Ashley Cleveland broke my heart, then helped me put it back together again. The book begins with Cleveland telling a little history of her parents and grandparents on each side, then slides into the story of how she blames herself for her parents' divorce. From that moment of trauma on, Cleveland weaves a poignant story of the rejection she felt everywhere she went, the calamitous results of one-too-many drinks, and the downward spiral into addiction that she took. Her story reaches its climax in the most heart-rending display of resignation one could ever experience. After many years addicted to drugs and alcohol, Cleveland becomes pregnant and decides that the terror she feels is not because she doesn't know what to do; it's because she knows that she will undoubtedly fail in the most horrendous, unforgivable way possible and birth a deformed, diseased baby. The darkest hour of her life, however, turns out to be the brightest moment she could ever find, and the desire to live for her daughter, however long it may have taken, pushes Cleveland to overcome her addiction and ultimately help others beat it as well.

Artists in any medium have a tendency to be narcissistic and dole out only the good that's happened to them and leave us in awe that the bad was only a scrape on their skin, when really the trauma reaches further than their heart. Cleveland skips all the niceties and gets straight to each point as her story brings it along. Instead of skipping around a hard topic, she comes out and says it like the fact that it is, sans the woe-is-me gauzy curtain draped about most memoirs--no frills, no dramatics, no airs of pretentious art. Ashley Cleveland doesn't play around; she tells you what's what, and that's that.

Everyone Cleveland talked about took on a realness that I could believe. I can't critique them as characters in a novel, because they're not. They were and are real people from her life that she managed to put down in such a way that my heart was breaking, and cracking, and falling apart every time something happened to them or to her. Cleveland made me understand from a new set of eyes that despite who we have in our life--and how they're living--they're worthy of love. They're worthy because I am, and none of us are worthy of it to begin with. And if I profess to be a lover and follower of Christ, how dare I sit in judgment of the person He's drawing to Himself. What Ashley Cleveland affirmed to me was that people vex one another, but that doesn't make them unlovable. Her realness and authenticity about who she is, and who Christ is, are an unclouded pool in the muddy marshes of the forced "theological" statements prominent in most Christian memoirs out there today.

Theology, also, was absent altogether in Little Black Sheep. Each chapter was more and more compelling as examples of Christ's unbridled and wild love for each of us, and the Doctrine Himself served as the center point for this story that continues as Cleveland walks her journey as a musician, mother, wife, and human being. Little Black Sheep holds the most honest examples of how Christ will pursue the little black sheep of the world until they come home, despite who they are, what they've done, where they've been, and who they say they are. They may reap their bitter rewards, but Christ will pursue them until all is said and done. Ashley Cleveland gladly neglected to smash me in the face with a two-by-four of theology and instead offered me nothing but Christ and Him crucified. I swallowed no candyfloss message; I wept with her presentation of life as it truly is: heartbreaking, desperate, hopeful.

I could find few things wrong with Little Black Sheep. The only issue I saw was a slight bumpiness of the first chapter and a half. From the middle of the second, though, the transitions became very smooth and led us to the next crack in my heart until the very end where Cleveland picked me up, dusted me off, and handed me a tissue.

Cleveland presented her brokenness alongside everyone else's, and the reader's soul will ache with camaraderie as her heart and soul reach out through the words, takes his or her hand, and says, "Whatever you're going through, let's go through it together." She illustrates with grace, dignity, poise, and no-nonsense narration the up-and-down life so many people live. Her voice is engaging and immersive, a cloud-pillow catching us after being dragged up the mountain of despair and dropped in a terrible crash of sorrow. Cleveland asks us to give our attention instead of our judgment; grabs us with a caress that beats our hearts soundly with sadness; then tends the bruises of our brokenness with the Balm of Gilead and a hand to hold. Little Black Sheep is the most enjoyable memoir I have ever read, and I will remember to wear a Band-Aid over my heart forevermore to remind myself how broken we truly are, and that God wouldn't have us any other way.