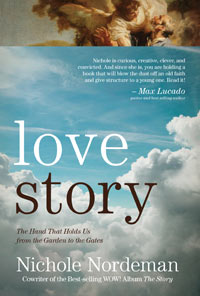 Nichole Nordeman
Love Story: The Hand That Holds Us from the Garden to the Gates

The last time music fans heard an album of new material from acclaimed singer/songwriter Nichole Nordeman, it was with the release of her 2005 record, Brave. Last year, the busy songwriter/mother resurfaced with a unique labor of love in The Story: a concept album that Nichole Nordeman and Bernie Herms had put together based on key biblical figures and stories that tell God's story from Creation to Jesus' promised return. Now, almost a year later, Nordeman has completed her first book, a collection of stories from her own life that she relates to the biblical stories that were told in song on The Story album. Love Story: The Hand That Holds Us from the Garden to the Gates takes on a song and character per chapter as Nordeman weaves the inspiration for these songs into easily relatable, fresh takes on familiar stories from the Bible.

It's common for the church body to feel like they need to look like they have everything in order. (And it's natural for us to want to.) In actuality, it's mostly an illusion that anyone has life, and especially God and the Christian walk, figured out. Nichole Nordeman knows this and, unless you know the writer on a personal level, Love Story isn't at all what you might expect it to be. Nordeman writes from a deeply personal perspective, talking candidly and frequently humorously, using her prowess as a wordsmith to tell stories in an equally entertaining and tangible way. If I had to sum up the experience and tone of Love Story briefly, I'd liken it to a personal coffee shop chat with Nordeman. It's the kind of book you'll want to curl up with, coffee or cocoa in your favorite mug in one hand, and Nordeman's heart-on-paper in the other. As each chapter tackles a different Bible character and theme, they nearly read like extended, meaty devotionals. Each chapter begins as a series of stories from Nordeman's own experiences, and she seamlessly relates them to a true biblical person and tale. Nichole's honesty about her own shortcomings and pitfalls, and her frankness about her faith, rope in your attention and emotions. By the end of the first chapter, it's tough not to already be committed for the 261 remaining pages. By the time she relates her disdain for birds in the following chapter in such a humorous and forthcoming manner, she had a rein on my heart.

The subject matter of Love Story can get a little weighty as Nichole opens up about various personal struggles--many of which almost all of us have or have had--but also shares about her battle with depression and struggles with relationships. The second chapter, "How To Kill A Bird," one minute has the reader laughing at, not only how she expresses her hatred for birds, but also at a story she tells about one particular winged pest that wouldn't stop ramming into one of her windows. The next moment, she's opening up about a dark time in her life in a way that has her words cradling your heart in her hands (especially if you can relate in some way). She then relates all of this to the story of Adam & Eve in such a down-to-earth way many readers may have never really thought of before. Nordeman places herself in the shoes of these characters and presents a commentary that many of us may have thought but few have had the guts to admit aloud. And since Nichole makes no bones about not having the answers to questions in her own life as well as some of believers' biggest questions, sometimes there's little resolution from chapter to chapter. Love Story isn't the book you go to seeking answers handed to you by someone who has been trained to relate such findings; Love Story is the book you go to to be reminded that, not only are you not alone in your questioning, but it's possible to discover a different perspective. Nichole's take on David in the chapter "Why We Watch The Bleachers" highlights the human need to be recognized and accepted, and why we're always sizing ourselves up with other people, especially biblical "heroes." By the close of the chapter, Nichole had reminded the reader that David had a lot of ugliness in his life as a result of his sinful practices, yet his heart was hungry for God in such a way that warranted God labeling him as a man after His own heart (1 Sam. 13:14). It's about perspective. And it's just one of the ways that this songwriter hopes to share a different viewpoint for her readers and freshen up stories that many believers have grown too familiar with (and therefore maybe a bit calloused toward).

The chapters progress thematically in the same way The Story soundtrack does. Each chapter concludes with the lyrics from the topical song on the album, wrapping up the theme that Nordeman just wrote about (also making the book and record a wonderful companion piece for each other and some sort of study). Early on in the book, she expresses her love for used books and her guilty pleasure of discovering tattered old novels and spinning her own stories as to who may have owned the book, where it was read, at what point in someone's life it was read, and how it found its way to this particular book shelf. In a similar way, Nichole paints gorgeous word pictures that fill in the gaps for biblical tales that don't go into the details one might hope they would. In her chapter on the thief, of whom she bestows the name of "Steve" (since he was never given a real name, just an unfair association with his crime), she begins to fantasize about who this man really was, and beautifully about how, just maybe, Steve had encountered Jesus previously at some point in their lives. Again, in the chapter about Mary Magdelene, she wonders why the woman brought burial spices to Jesus' tomb knowing full well it was guarded and she couldn't have gotten inside. And again, she reinvisions the story of Paul and the Pharisees as professors in a college and likens Jesus' disruptive following and teachings to that of a janitor who garners such a passionate following at the college. Her masterful ways of using words to be humorous one second and completely illustrative another make Love Story one of the most rewarding reads I've had in a long time.

Nordeman's brand of humor is right up my alley, however. She's very frank about some things and is often dangerously confessional about her feelings and beliefs at times. She tends to use some silliness and sarcasm to lighten the mood or help paint a picture and tell a story (and also be entirely self-entertaining for her own amusement, no doubt), and it's something that I find especially endearing and personal. Some readers might not quite grasp Nordeman's candor and dry humor, and that would be terribly unfortunate as it proves to be a highlight of the reading experience and the anchor for her storytelling. But Love Story is a journey for Nordeman and her readers. Assuming she wrote the book in chronological order, there's a sense of revelation from the author that the reader can also potentially experience. Nichole sounds a bit more broken and lost in the earlier chapters, but encourages herself to rediscover themes and stories as the Bible's love story unfolds. By the time she gets to her chapters about Jesus, the thief, Mary, Mary Magdelene and the disciples, she's still frank and often funny, but there's a greater reverence and wonder in her words. It's almost impossible not to be caught up in it and find yourself shedding some tears by a chapter's end, even if you're not prone to spontaneous weeping. (She got me with the word association name substitution at the end of the Mary Magdelene chapter. Sigh.) But that doesn't mean that all of the best was saved for last. Her chapters on David and Job are especially impactful, and the latter brings up such valid questions about God's treatment of His faithful ones that you're likely to be grateful that Nichole's voicing questions your heart has asked a time or two. And when she peels back the Kevlar on some carefully guarded struggles for just a moment to let the reader in, you start to further understand some of her deepest pains and you know, having been with her this far, that it wasn't easy for her to even surrender that much.

Love Story is a gem. It's one of those books that is rewarding on various levels and may have you thinking with each page who you wish to share this with once you're finished. It's a great discussion starter and a wonderful way for complacent hearts to look upon potentially [personally] stale Bible stories with fresh eyes. Nordeman confesses her own complacency at times and offers these stories and autobiographical tales for those of us who have been believing through thick and thin but may be feeling a little road weary. Fans of Nordeman's work in music won't want to miss this book, while those who are looking for some meaty, entertaining and thought-provoking thoughts from a Christ-following mom who, too, is trying to make sense of it all, should not miss one of the best books you may read this year in Love Story. I can honestly say that I can't wait to read the next work from Nichole Nordeman.