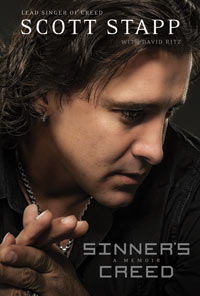 Scott Stapp (born Anthony Scott Flippen) is the lead singer and songwriter for the multi-platinum and diamond selling band Creed. While his band blew up in the late nineties, Scott's personal life was explosive starting at a young age. In his memoir, Sinner's Creed, Stapp, now clean and sober, is finally telling his story of abuse, addiction, rock stardom, and eventual recovery.

The book actually starts with Scott's well-publicized suicide attempt at Miami's Delano Hotel. A paranoid Stapp, strung out on drugs, made an attempt to escape his sixteenth floor hotel room via his balcony when he fell some forty feet onto a concrete ledge. The fall should have been the end of his story, but God had other plans.

Scott hits the reset button and starts over with his childhood. He tells of his biological father leaving while watching TV together at age five and the enormous ego and super-hero complex that arose out of it in an attempt to take care of his mom. From there, he tells of his mother's remarrying to Steve Stapp, his step-father. He spins the tale of confusion brought on by the Bible teaching and constant beatings from Steve. Scott gained a firm biblical and Godly foundation, but the abuse set in a deep depression that would haunt him for years to come.

In vivid detail, Scott recalls his upbringing, academic and athletic success, running away from home and being kicked out of college for smoking pot. Conversations held with his father and others seem to be forever etched in his memory and he remembers them, seemingly word-for-word, at key points during his life. From there, he explains how he made it alone in Chattanooga, made his way back to Orlando, and reconnected with his biological father before starting FSU. Throughout his hardships, Scott maintained a faith and belief in Christ, but avoided living the lifestyle of a believer.

He then recounts the rise and fall of Creed, from meeting Mark Tremonti to the bitter disbanding. Scott shares the enthusiasm of starting and molding Creed, but also tells the story of prescription drug abuse, alcoholism, depression, and the internal discontentment that came with becoming a rock star; all of which led to the band's break-up. Stapp also revisits the rollercoaster relationship he shared with his Creator. He claims he never lost his faith, but his volatile lifestyle had him in varying degrees of closeness with Christ. Whether it was the birth if his first son or meeting his current wife, God kept calling him back.

The story finally comes "full circle" as Scott gets back to his fall at the Miami hotel. He tells of how God, his wife, and a Christian recovery center got him back on the straight and narrow before Creed's reunion and how he slipped back into his old ways shorty after. Finally, Scott's story reaches its positive end with a complete recovery at the Betty Ford Center, the birth of his third child, and news of a fifth Creed album. Scott professes his love for Christ and gives all the glory to Him.

If you are looking for a story of God's love and redemptive power, Scott Stapp's is a strong one to look at. If you are a Creed fan, or if you want an inside look at the media circus that was Scott Stapp after the break-up of Creed, this book is worth the read. If you think you know the story, you're probably wrong. Also, if you find yourself struggling with a rough spiritual upbringing and confusion about your life and God because of it, this is a must-read. You may even find yourself to be inspired by God's triumph in Scott's life. 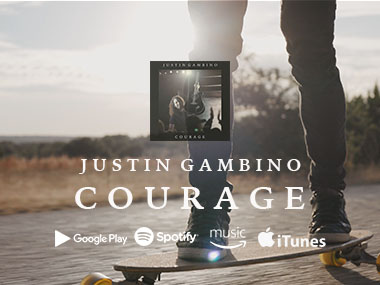