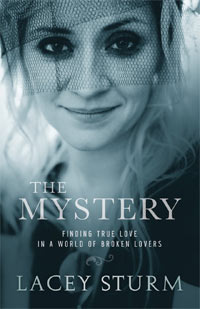 Lacey Sturm
The Mystery: Finding True Love In a World of Broken Lovers

When Lacey Sturm released her first book, The Reason: How I Discovered a Life Worth Living, she blew readers and reviewers away with her raw honesty, dry wit, and evident passion for God. In The Reason, Sturm wrote about her difficult childhood, how she became an atheist after the death of her young cousin, and how God saved her the day she planned to commit suicide--and continued to work in and through her life afterwards. Within that book, Sturm hinted that she had more to say, particularly in regards to relationships, but it would have to wait for another story. Her second book, The Mystery, tells that story.

At first glance, readers may wonder if The Mystery: Finding True Love In a World of Broken Lovers is going to be “another Christian dating book.” There are a plethora of Christian books about love on the market, many of which are aimed at amorous young people, urging them to rein in their enthusiasm. While Sturm does address this demographic in her book, it is clear she also wrote this book for the cynics, the people who have become so jaded with love that they want nothing to do with it, or they do not know what healthy relationships (of any kind) are supposed to look like. Sturm’s main focus in this book is on two types of relationships--the relationship between fathers and daughters, and the relationship between lovers. Based on the Amazon.com description, The Mystery seems to be primarily targeted toward young women, but fear not--this book is for everyone, whether they are male or female, single, dating, or married.

Sturm opens the book with an anecdote about a happy memory she has of being held by a male friend of the family while out trick-or-treating as a child. From here, she describes her craving for fatherly love, as her biological dad was absent throughout her childhood. She recounts terrible examples of fatherhood she witnessed from the lives of her friends, and she introduces us to the idea of an “orphan identity,” a phrase she first heard when Flyleaf’s band pastor and father-figure, Eric Patrick, spoke about it during a retreat. Sturm doesn’t define what an “orphan identity” is all at once, but rather unpacks it throughout the book, adding on to a list of the characteristics of this identity, such as feeling suspicious of kind authority figures, fearing that God does not have good in store for us, and trying to earn our salvation and any of the blessings God bestows on us. It’s an identity that isolates us from other people, because it’s based in bitterness, and it isolates us from God because it feeds on fear.

Unlike Sturm’s first book, which was more episodic in style, The Mystery has more of a narrative arc, with the focus on three main events in Sturm’s life--her emotional affair with a married man, her season of singleness and falling in love with God, and her courtship with her husband, Joshua Sturm. Each chapter focuses on a different lesson Sturm learned while living through these events, always weaving in the theme of defining and defeating the orphan identity, pointing to God’s love and truth as the only cure. There are points throughout this book where Sturm briefly recaps an event from The Reason to provide context for a parallel event in The Mystery. Readers do not have to read The Reason first to understand The Mystery, though it is helpful to know more of Sturm’s backstory.

Sturm does not waste any words in this book--whenever she describes an event, there is always a spiritual truth to glean from it. Many readers will want to have a highlighter or a pen in hand as they read, so they can mark any lines or passages that stand out to them. They may also want to keep tissues close by, as Sturm’s confessional account of regret and redemption moved this reviewer to tears several times. The prose in this book is poetic, but not dense, and Sturm’s ability to cut through the surface of her writing and clearly relay her message is unusual in Christian literature. Quite often, the message of a Christian self-help book can get muddled in the exposition and storytelling, causing the book to drag and the reader to become slightly confused. Sturm’s concise writing avoids this problem; she keeps the chapters short, her tone conversational, and her text readable, and it’s clear that this book was well-edited. Also, rather than tell the reader a list of do’s and don’ts for their own personal relationships, Sturm leads by example and lets her story speak for itself.

There are no major flaws with The Mystery. There are a few minor grammatical errors, where a word is missing, but the reader can still understand what Sturm is saying. The die-hard Lacey Sturm/Flyleaf fan may want further details at certain points of the book, especially if they’ve watched old interviews where Sturm describes some of the events mentioned in The Mystery, but those details are not essential to the story being told here. Readers looking for a read that will comfort, convict, and encourage would do well to discover The Mystery.