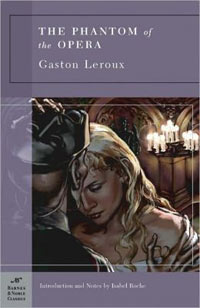 Gaston Leroux
The Phantom of the Opera

Before I say one word about this novel, let me be frank in every way: I am not going to make comparisons to Andrew Lloyd Webber's Broadway adaptation of The Phantom of the Opera. Leroux's novel and Webber's adaptation of it are two completely different stories. What I am here writing on is the novel-the actual story of the Opera Ghost.

Gaston Leroux starts off his novel with an intriguing claim that everything within the book's pages is an actual account of the tragedy of the Opera Ghost at the Paris Opera. Throughout the book, he gives us little bits to chew on; say, for instance, Moncharmin's fictional memoir, and the Persian's written account being taken for some of the last chapters in the novel. Leroux, while intrigued about actual stories of an Opera Ghost, took it upon himself to construct and detail for us readers a very vivid, very heart-rending (and unfortunately, yes, fictional) account of the entire story behind the chandelier falling at the Paris Opera-an actual tragedy that spurred him to really look into reports of this purported Opera Ghost.

What we have today is a timeless novel of love, tragedy, and gothic (as in "domestic") suspense liable to make even the most hardened person sit up and take notice. The story itself begins with dancers in the Opera gossiping about the Opera Ghost being seen and having murdered a poor man to spot him and spread the rumors that he had, indeed, seen the Opera Ghost. We're then introduced to one of our main players, Raoul de Chagny, a viscount in Paris. He recognizes his childhood sweetheart, Christine Daaé, and immediately tries to rekindle their old friendship, and perhaps something more. What Raoul falls into is the mystery and entanglement of Christine's vows to the Angel of Music (the Opera Ghost) to never marry, so as to ensure the Angel does not go away like he promises to should she decide to marry. The web twists around and around so far that eventually the only way to disentangle the entirety of it, tragedy must come of someone. The Opera Ghost, Erik, takes it upon himself to make the sacrifice necessary to ensure his true love's happiness; he gives up his own dreams of love to see Christine stand beside Raoul, where she's truly happy and truly in love.

When once introduced to Leroux's characters, I felt as if we would spend a lot more time in the upper class world, like some renderings of this story make it out to be. However, this is in no way the case. We start at the top, but quickly plunge into the Opera's darkest secrets, ending in the third cellar of the Opera at the climax of the book. As for characterization, the personalities come across very distinctly; my observations lead me to point out that the only character that really develops at all is Erik himself. He goes from being the mysterious Angel of Music to a devoted lover so set on seeing his beloved happy, he sets her free at great cost to himself. I came to really be annoyed with Raoul and Christine at their surface-level development, but in the end, I realized that the story belongs to none other than Erik, and I couldn't fault Leroux for making everything revolve around O.G. (the Opera Ghost).

The setting in Leroux's novel follows the same ladder principle. We enter this resplendent world of art and upper-class citizens and nosedive quickly into the darker realities lurking in the Opera cellars and in the very walls of the Opera itself. Erik's ruling over the Opera House gives us the dark and suspenseful overtones present throughout the book. Paris becomes more than a city in this novel; it becomes Erik's playground to do as he wishes, where he wishes, and the city that seems so large constricts itself into a smaller, denser bundle of tension with every page that turns. I wouldn't call Leroux's work one that needs world-building; I would call it a tight stage to work against in terms of setting, and he does that very well.

As for content, specifically alcohol use, port and wine are mentioned. I think at some point someone is thought to be out-cold drunk as well. Sensuality, drugs, and profanity are not present in The Phantom of the Opera. In terms of violence, we never have anything exactly given to us. Example: the Persian and Raoul carry pistols when searching for Christine and Erik, but they never fire them. The worst in the violence field has to be the illusion-driven "torture chamber" Erik sets up, or the allusion to past violence. However, one man's murder is mentioned.

Gaston Leroux's The Phantom of the Opera, while lacking in some places, gives all respect and justice to the novel's namesake: Erik himself. Literary critics take this novel apart looking for symbolism and meaning, but no one gives the metaphors better explanation than O.G. in the last few chapters in which he speaks. Dear reader, do not go into this novel expecting something off of Broadway, fancy and shiny and new; rather, go into it looking for the Opera Ghost, and you will find Erik-simply Erik-and the entire tragic tale surrounding someone simply wanting to be loved for himself. I think we as Christians could take a great lesson from Leroux's novel. Upon first appearance, people are seldom all they seem to be. Only on taking off the mask do we find who lay beneath. Simply a person, wanting simply to be loved for him- or herself, and nothing simpler, and nothing less complicated, than that.