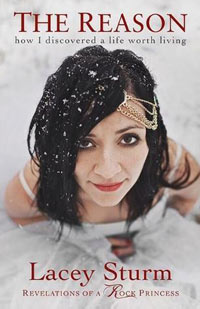 Lacey Sturm
The Reason: How I Discovered a Life Worth Living

Do you wonder, dear reader, why I continue to take on nonfiction, though I say in every nonfiction review how I don't normally read such things? Do you contemplate why I continue to delve into the field of reality when I myself am a fiction writer? Is it because I wish to broaden my horizons, or perhaps for the fact that the old saying goes, "Reality is stranger than fiction"? Well, in some cases, these answers are correct, but I read nonfiction for the same reason I flag through my own field--in order to find the gems gleaming in the depths of the coal mine. Many times I've had anticipation urge me onward, only to drop me off the edge of the proverbial cliff. However, this time I found a gem. I'm incredibly glad to say that Lacey Sturm's The Reason: How I Discovered a Life Worth Living was not one of those red herrings; it was a Star of Africa gleaming in the nonfiction coal mine.

Opening a memoir with one's birth seems to be the focal point for the genre, and keeping this moment original or in one's unique voice proves to be a challenge. Sturm sets the tone by describing her grandmother cussing out the nurses, then the hospital, when Sturm was born two months premature and the care did not seem up to par during the complicated birth. We're given tales about her mother's selfless heart, her siblings acting as little suns in the dark days of her pre-adolescence and teen years, and difficult tales about the common fights and the abuse members of her extended family suffered, even to the point of being beaten to death. The day Sturm planned to kill herself was the day her grandmother forced her to go to church--only, Sturm never counted on having a powerful, unforgettable, irreversible encounter with God. Then her life flipped upside down, and she began to see the value in every person as a human being God created. Thus began her journey toward wholeness, healing, and, ultimately, Flyleaf.

If you know me at all, you'll know that I am a stickler on the rule of continuity in story, constantly checking facts against facts to make sure every single thing lines up. Most of my nonfiction ventures have led me to discover an alarming trend in killing continuity throughout the manuscript, despite the chronology and relevance nonfiction demands as a genre in order to make sense. Possessing the mind of an editor, I kept closer watch than a hawk on the progression of Sturm's story. What I found was that the continuity in this, her literary debut, defied expectation. Everything that is relevant stays relevant, and everything Sturm deems a fact for a later story, she slides away from and only hints at. I could find no points out of line, and this striking level of concentration has thoroughly impressed me. I never had to wonder why something was mentioned, because if said topic dangles, Sturm eventually weaves her way back to it and makes her point when we least expect it, giving her another advantage: never having to manipulate our emotions.

Sturm's memoir sets itself apart from other examples of its genre by holding a conversational tone throughout the entire book. I never had to bring myself back to the page and plod onward, as the tone held my attention the way an actual face-to-face conversation with her would. I felt her talking to me, and despite the focus being on her personal story, the revelations that made me stop and ponder gave me the feeling that Sturm was also listening to me. The depth of such engaging, conversational tone is incredibly difficult to achieve in any novel, let alone a nonfiction memoir. Sturm leads readers in by the hand, serves them tea and biscuits, then takes the seat across from them to listen to their own personal ponderings the further in they read.

Such relatability makes this an easy read for flow; however, should anyone sit down and expect a run-of-the-mill sob-story out for attention, that person would be sadly mistaken. Sturm lays all of her worst and best out for the entire world to see in a manner so humble and honest, one wonders why more writers have not taken such leaps. The hardships Sturm endured hit home for anyone who has been through the same--or something similar to her--experience. Every difficult item is laid bare before us, every tough topic taken seriously and delicately at once, and one can only marvel at the fact that such human trials may be so easily talked about in a society considering many topics taboo: depression, suicide, drugs, alcohol, homosexuality, doubt in God, death, grief, life, ill health, all these among others. I believe strongly that The Reason will stir up the literary scene, and the Christian market, in ways we have needed to see for a few years now. This doubter in nonfiction has had her hope renewed that people may bare their souls in honesty so that others can come to know Christ, come to feel loved, and come to see that they are not alone in spite of the world's voice whispering that they're the only ones to experience a valley dark and deep. Lacey Sturm has laid a foundation for the next wave of memoirs. I eagerly await the resounding shockwaves her literary debut will undoubtedly send through the crust of this World of Literature.