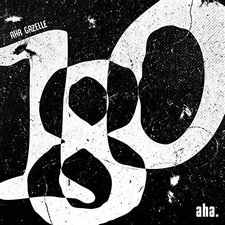 
With the Reach Records / Aha Gazelle relationship coming to a halt, many CHH fans (myself included) were wondering what Aha was going to do now. The New Orleans native did drop some singles recently ("Keep Going" and "Weatherman" - both very solid efforts, by the way) to keep fans happy, but now he has officially dropped his first project: a seven-track piece titled 180 that can be found on streaming services everywhere.

180 opens with "Letters To You," which is short, funky, and standard Aha, before "Balloons" comes on and delivers a nice combination of singing with Aha rapping about letting go of all of his problems. "Take The Lead" and "God Fearing" come along later and give insight into Gazelle's personal life, his struggles, and how things have been going for him lately. Both tracks carry nice depth and give a better understanding of what is on Aha's mind.

Simply put, 180 is what you should expect from Aha. There's nothing here that is ground-breaking or mind-blowing, but current Aha fans will definitely enjoy it. 180 is a little unconventional, very honest, and carries solid beats. I am looking forward to see what the future holds for Gazelle.