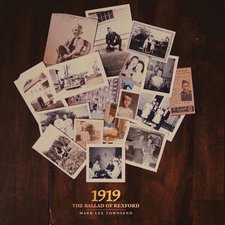 
Mark Lee Townsend is a name a good many CCM fans may not know, but they have certainly heard something he's been involved in releasing. MLT started in the Christian music industry way back in 1986 with the relatively unknown band Bash 'N the Code, but eventually got the gig of playing guitar for CCM giants, dc Talk. The rest of dc Talk's touring band joined up with Mark to form Zilch, who released a single album, titled Platinum. In between dc Talk tours, Townsend also played as Jennifer Knapp's lead guitarist. While MLT had success as a musician in the industry, he really seemed to hit his stride as a producer. Townsend has produced all of Relient K's best material, as well as albums for The Wedding and The O.C. Supertones. Most recently he has been seen jamming with John Schlitt and John Elefante in the Jay Sekulow Band, or playing in his own Beatles' tribute band Sixty Four. After a career spanning about 32 years in the Christian music industry, MLT has finally decided to record and release his very first solo album. 1919: The Ballad of Rexford is Townsend's magnum opus and chronicles the life of his father, Rexford Townsend (1919-2005). The lyrics tell the story of a boy, who despite being raised during the great depression by an alcoholic, abusive, and adulterous father, found Jesus and raised his own family with his faith first.

The story of Rexford Townsend naturally starts at "The Beginning." His parents moved away and got married because Rex was on the way. "1919" follows as an instrumental to celebrate the year of his birth and leads to the still hopeful "The Kids," which features the birth of Rex and future plans for the Townsend family. "The Son" is a song about a proud father, but you can see darkness creeping into the picture by the end of the song. MLT sings, "Have you seen my son? Even though I've probably been less a faithful father and example than he knows. And been hard on him; I hope he won't resent me and he'll learn in life to take it as it goes." "The Realization" is when the story takes a downward turn for Rexford as the only lyrics repeated in the short track, from his dad's point of view, are, "I'm traveling down this road going nowhere." "The Move" (featuring Davy Baysinger of Bleach) sees the great depression hit in full force as the Townsend's are forced to move out of the city, and into the country, when the factory his father worked in is closed. There's still a morsel of hope in the story as MLT sings as his grandfather, "But if we keep our heads together it will all be fine; a season always changes given time. We'll pack our things as we remember this and go where the good life is." "The Apology" serves as the next scene with a somber piano playing out an apology between Rexford's parents. As the soberness and beauty fade away, we are greeted with the much more aggressive "The Hardest Job" (featuring Matt Shelton of The Wedding and LetterKills). Here we find Rex's father tormented by anger and alcoholism and trying to justify his behavior so that his family can "have something of our own." The alcoholism is highlighted as Mark sings from the perspective of his grandfather again, "And I'm not drinking any more than all the other men, but I can't say that I'm drinking any less," while the anger and abuse are featured in the lyrics, "Why can't I stop myself from bringing the anger home?" Despite these problems, you can still see a man struggling with the way he's living his life and treating his loved ones as the lyrics continue, "Can a hard-living man ever change the way he lives and double back to where this whole nightmare began?" "The Weary Man" (featuring Ross Holmes) is the final song taken from the perspective of Rexford's father. His father reflects on the mess he's made of his life and the heartache that he's caused his family, "You have ruined the things you held so dear in the sad grip of alcohol and fear. You can't think how things ever got so bad. Weary man, you don't realize what you had. And you go on living like you're only gonna lose; empty, self-loathing, defeated, battered, bruised. On you go; don't let it show."

"The Church Meeting" (featuring Relient K's Matt Thiessen) sees the events turn to a positive and is the story of Rexford giving his life to Christ as a teenager at a small church down the road from his home. "The Draft" (featuring Wes Blaylock, formerly of Deas Vail) follows Rex as he takes a train out of town with his draft letter for World War II. Rex is getting ready for war, but hasn't forgotten about his mother left at home while he's gone. The verses are more about Rex's thoughts, while the chorus and bridge are more about the war and fighting. "The Dance Hall" (featuring The Wedding) finds Rex back home after the war has been won as he meets his soon-to-be wife, asking her to dance. The story progresses naturally to "The Question" (featuring Tim Skipper of House of Heroes) as Rex proposes in a short song that mirrors "The Realization" in idea and purpose. "The Sum" has Rexford looking at all of his blessings, being thankful for his simple life, and wishing for more happy days. "The Possibility" shifts focus from Rexford to his wife. MLT's mother suffered from chronic illness in her life and the lyrics find her trying to comfort her husband through his stress, showing her faith boldly without complaint of her circumstances. "The Nowhere" (featuring Tim Skipper) begins to wrap up the story of Rexford Townsend. The lyrics feature Rexford dealing with the stress of unemployment, tough days, and the death of his wife, but his faith shines through it all as he knows that his future lies in Heaven. MLT pokes fun of himself through the perspective of his father as he sings, "Well, at least we had enough to pay for weddings; my daughters are in someone else's hands, but when it's coming down to that only boy of mine: He thinks he'll make a living playing in a band, oh!" Just like "1919" was an instrumental to celebrate the birth of Rexford, "2005" is an instrumental to remember his life and the year of his death. The final song in the story of Rexford Townsend's life is "The Joy." The song builds from the ending of "The Nowhere" as Rex has joy and comfort in the Lord as his life comes to a close; it's a happy to ending to an extremely moving and emotional true story. The final track of the album is one of the first songs that MLT wrote as a 10 year old boy. "The Homecoming" is a simple and short song that is a perfect fit for an end as Mark sings, "Going home, going home; all of God's children are going home."

Musically, The Ballad of Rexford is spot on. The album is blend of Americana and the rock and roll that Mark Lee Townsend has been playing for so many years. However, nothing is forced. The mood of the music fits the mood of the lyrics, and the instrumentation is flawless. While MLT played the large majority of the instruments on the record, he did have some other musicians in to help him. You'll hear everything from guitars, to pianos, to Hammond organs, to strings, to autoharps, to harmonicas, to a mellotron, and everything in between. There's a huge musical backdrop hanging for the story. For a few examples: "The Kids" is a happy song that has an All Star United type of pop/rock vibe; "The Apology" is a moody song with a matching piano leading the way; "The Hardest Job," about alcoholism and violence, is equally aggressive in tone; while "Joy" is just as joyous sounding as its title. Each track follows this formula with the music perfectly matching the story being presented. MLT is a multi-talented veteran in the music industry, but he knows his strengths and weaknesses. While this is a very personal record for him, he brought in outside help to make this the album the best it could possibly be, and it paid off in a big way.

1919: The Ballad of Rexford is a story that plays out at just over an hour in length; there is a lot to digest and will take several listens to get the story down. However, if you have the hour to listen, this album will be finished before you think it's even halfway over -- much like a good movie. Mark mentioned that this album was like "the soundtrack to a screenplay not yet written." That assessment is spot on. As you listen to the songs you can see the scenes play out in your head clearly just like a movie. In essence, the album is really just one long song with different parts. While most artists releasing their first album should not release an hour long, 19-track concept album, MLT pulls it off brilliantly. Knowing his background, I expected the record to be a solid outing, but what I heard was so much more. What listeners get here is a perfectly executed musical experience with an outstanding story. If you're just looking for a taste before jumping in, I'd suggest "The Son," "The Move," "The Hardest Job," or "The Nowhere" for starters. With that said, the best experience you're going to get is listening to the story from front to back. Mark Lee Townsend wants his father's story and this album to be used as a ministry platform and there are many in today's world that can relate to the hardships and story of Rexford Townsend. I highly recommend checking this album out as soon as you can; I don't think you'll find yourself disappointed in the least.

Mark Lee Townsend, perhaps best known as a guitarist for DC Talk, embarks on a solo project that shows off his singer-songwriter chops. It tells the story of Townsend's father, Rexford, through lush, emotion-packed songwriting that chronicles his life from his birth in 1919 to his death in 2005. Both musically and lyrically, Townsend's love for his dad and his heavenly Father shines through as he tells an incredible story of redemption that could easily be one of the best albums of the year. - 1/20/18 Andie Hardee

Mark Lee Townsend is best known as the producer for Relient K and the guitarist for DC Talk's band (aka Zilch), but after years of being behind the scenes, he is stepping into the limelight with his first solo album. 1919, a concept album about his father, Rexford, was recorded over the span of 10 years, and it truly does feel like the culmination of years of hard work. The interweaving musical themes, the flow of the story, an impressive list of guest vocalists, and a handful of standout tracks make this record a masterpiece. Townsend has set the bar extremely high for music releases this year. - 1/23/18 Christopher Smith of Jesusfreakhideout.com