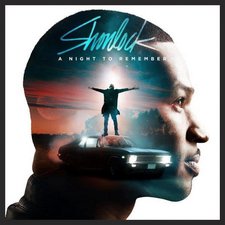 Shonlock
A Night To Remember

After nearly twelve years' experience on the music scene, the work of hip-hop/R&B artist Shonlock is finally gaining mainstream traction, and A Night to Remember looks to be his distinguishing chef d'oeuvre. Shonlock's induction into TobyMac's Diverse City Band has no doubt contributed to his recent success, but in no way is an undeserved handout. Regarding the theme of A Night to Remember, Shonlock states, "I know lots of people have many different experiences in coming to know Christ.  That journey is the heartbeat of [this] album." With producers Joshua Crosby and Solomon Olds at the helm, A Night to Remember easily crosses the threshold between good and great, landing somewhere near exceptional territory.

The album kicks off with the title track, baptizing the listener into a world of dance, pop, and hip-hop, somewhat unprecedented by Shonlock's previous offerings. "A Night to Remember" is masterfully crafted and produced, presenting a catchy melody and devout lyrics, "I've got to know Your love, and remember tonight for the rest of my life. Never felt so anxious, here with You; weightless." The album then flows into "Heartbeat" and "Transformed," the latter of which features TobyMac. Neither of these songs are standouts, but they move the album away from the "dance" genre, and are both solid offerings.

"Don't Play" creates an intriguing atmosphere, thanks to Ryan Clark's (of Demon Hunter) guest appearance. The pair's vocals complement each other in an unparalleled format, making this one of the strongest tracks on the album. "Hurricane" slows everything down a notch with Shonlock becoming more personal and reflective with honest lyrics, such as "You broke my heart, and with Your grace tore me apart like a hurricane" defining the message. Although the song may border on cliché, it doesn't cross the line. "We Walk on Water," the album's lead single, is the catchy, radio-friendly track it was designed to be. Although far from the best song on the album, it doesn't detract from A Night to Remember, and fits into place quite well.

"Kinfolk" is a colorful song enhanced by Solomon "Soul Glow Activatur" Olds, formerly of Family Force 5. The lyrics capture that blunt, signature FF5 feel, "Whatcha think we here for, down for my kinfolk; we are the ones, we get it how we live for". Shonlock gets an opportunity to showcase his true rap talent here as well, creating one of the best songs on the album. "I Like to Win," however, takes the cake for the strongest track on the album. This piano and beat-driven rap is quite reflective of the style that Macklemore and Ryan Lewis have made popular in recent years, but by no means is "I Like to Win" a cut-and-paste job.

"Beyond this World" turns up the electronic effect, creating a relaxed and beautifully constructed sound. Shonlock draws A Night to Remember to a close with "My Choice is You." The peaceful song's passionate lyrics penetrate the melody: "When every part of you is crying out without a sound, I heard you then; I hear you now." This closing track is one of the best on the album, ending A Night to Remember with the line "one thing in life I know is true, I made my choice and my choice is You."

Overall, A Night to Remember is a magnificently tasteful project, encompassing all of the elements that Shonlock has come to represent. The 10-track album can feel a little short, but is assertively complete, and although there are a few weaker or average songs, the vast majority of the album hits a home run. This is some of Shonlock's best work, and A Night to Remember may be his greatest step forward.

The most recommended songs are "A Night to Remember," "Don't Play," "I Like to Win," and "My Choice is You."

CCM artists don't have a very good track record when it comes to pop and Top 40 music. More often than not, Christian Top 40 just sounds like a bad imitation of whatever was popular on secular radio three years ago. And so, I was pleasantly surprised by Shonlock's second LP, A Night to Remember. While Shonlock isn't breaking new ground here, instead sticking to a tried and true hip-hop influenced electronic dance pop sound, he's really quite good at what he does. "Heartbreak," "I Like to Win," "Beyond this World," the title track, and especially "We Walk On Water" are all really fun, well produced songs that don't sound like they're just aping other more talented artists. They're a far cry from the often cringe-worthy efforts of other Christian pop acts like Press Play. "Kinfolk" is even more fun in its own right, with a welcome guest appearance by former Family Force 5 frontman Soul Glow Activatur. The only song that just doesn't work is "Don't Play," which is way too stylistically schizophrenic. While this album may be too familiar or too radio-friendly to deserve an abundance of praise, it's still a great dance pop album and is definitely worthy of more than a few spins. - Review date: 3/15/14, Timothy Estabrooks