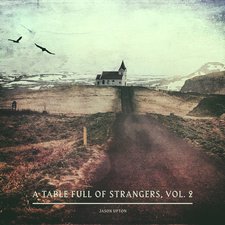 
Jason Upton has quietly flown under the CCM radar for almost twenty years now, but in that time has carved out a significant career in worship music circles, and has ministered to millions with his trademark, soulful brand of vertical music. 2015's A Table Full Of Strangers Vol. 1 found Upton weaving a significant number of nature metaphors into his music, and mixing more personal songs with more worshipful fare. A Table Full Of Strangers Vol. 2 continues this successful formula, and serves as an album-long treatise for keeping our eyes on the Lord, the "author of all good things."

It all starts with that otherworldly voice. With a husky, soulful and low-register tone, Upton's vocals are a key part of his music's appeal, and Upton sounds like no other singer in Christian music. In fact, the closest comparisons to Upton's unique vocals might be classic rocker Bruce Hornsby (who's "The Way It Is" is a supermarket music staple) mixed with a pinch of Ray Charles and folk-rocker Ray LaMontagne.

The nature metaphors in Vol. 2 go far beyond the hackneyed "fire" and "water" ones that are overused in modern worship music, and take repeated listens to parse their meanings. Opener "The Farmer And The Field" finds Upton reciting a bit of the song's refrain as a spoken word piece before a powerful and distinctly "Upton-esque" piano line enters the scene. The lyrics about the sowing of seeds (a familiar New Testament metaphor) are treated well in Upton's urgent, dramatic narration: "And there was a time / not long ago / when the sun did shine / and the sower sowed / and the rain did rain / and the crops did grow / it was a time before machinery / a time before certainty / a time before we bought the lie / a time before the farmer died / when we had trusting hearts and human souls / it was a time not very long ago..."

The subject matter here is dense, and far beyond the rote, formulaic worship tunes churned out so frequently by record labels. The opening song's use of a historical narrative (the decline of the human element in the growing of food) and the elegant and packed phrase "a time before certainty" shows Upton to be a keen observer of the change in society, historically speaking, and how that plays into our modern "certainty" mindset. There was a time when the farmer relied upon the Lord to send the rain that made his crops grow, and that same "dependence" seems to be what Upton is longing for in his own spiritual life. This narrative thread continues in the following song, "Only From You," where Upton clearly articulates his "dependence on the Lord" thesis in the song's refrain: "Every now and then / we've got to look to the sky / good gifts come from above / every now and then we need to hold on tight / and listen to the wisdom of love / because it's only from you / some things come only from you / we can gain this whole world / doing all we can do / but peace love and joy come from you / some things come only from you..."

The third song, "Mountain To Valley," continues with a the majestic theme of God's all-encompassing presence and protection with a soaring, rhythmic vocal and more geographical metaphors (with "cities" being added to the nature imagery). In "Redwoods And Daisies," Upton continues his spoken word poetry, weaving a tale that touches on Jesus' use of "the flowers of the field" and "the birds of the air" for a powerful lesson on relying on the good Lord for our needs. The following "Wild And Free" presents a case that "it's a holy thing / to be wild and free." In the wonderfully titled "Every Table Is An Altar," Upton makes the case for gratefulness in the daily gifts of food and breath, and continues his grand theme of being awake to simple things.

A Table Full Of Strangers Vol. 2 (and its preceding installment) are fantastic, pastoral albums that shine a new kind of light on what might be considered worship music. While the tone and pace of the album can be an acquired taste (Upton's rhythms and melodies flow into one another here, and can, at times, feel a little like background music), the masterful, extended use of nature metaphors and themes show a veteran musician's handiwork. Table Vol. 2 is a great way to start the year. May we all be awed by the simple, gracious gifts of the everyday, and praise our Lord in heaven for the rain and sunshine that brings growth.