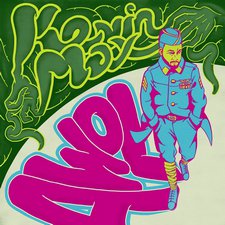 
Kevin Max is one of the most prolific names in the business these last few years. Not only has he been releasing the highest volume of music in his career in recent years, but it's also been real quality and diversified material. Kevin's love of the 80's is no secret, or surprise, to anyone, but until now his music has just been heavily influenced. AWOL finds K-Max releasing his first full-on album featuring an almost exclusive 80's sound. Shades of The Smith's, Duran Duran, and other new wave acts are all over the album, all while Kevin leaves his own unique fingerprint on the project. This has to be the album for the music lover still reveling in the 80's revival we're currently experiencing.

"Melissa" starts the album off on a great note. After only a listen or two of the opener, you'll find its chorus buried deep in your subconscious and surfacing at any moment. "Prodigal (Run to You)" follows and is a song about redemption, with lyrics insprired by the biblical parable of the prodigal son. However, the seemingly enigmatic lyrics to open the song are actually taken from a conversation between Kevin and one of his friends whom he nicknamed the prophetess: "Twas a wizard from 1809. He cursed my tree and my family line cause he knew that I'd be nothing but trouble." While there are some creative lines early, Kevin gets right to the need for Christ, "Son, don't you know He's got His hand on you; Don't you know that His Word is Truth and you, you gotta believe it." While the song is good, the absolute best sounding section comes immediately after the bridge. The lone picked guitar over Kevin's reverb-saturated voice sounds phenomenal; it's one of the best music moments in all of AWOL. "Glory Boys" has a strong Duran Duran vibe and is a fun song about Kevin's love of the new wave scene and his favorite bands from the era. "Half of the Better One" is a love song with a Smiths feel, and is the second song featuring that same band's bassist, Andy Rourke. Rourke also plays on "Melissa" and "Yeshua." The lyrics, "And when they say that two become one, I can safely say that I'm only half of the better one," help to make this one of the better love songs I've heard written in a while. Plus, you have to love the fact that Kevin was able to fit the word "quintessentially" into the second verse. Kudos!

"Eurorail" brings a heavy synth driven track into play with a much darker tone musically than its predecessors. It's an interesting track that certainly stands out in the mix due to its sound. "Moonracer" continues the album with a song that reminds me a little of U2. While the sound is a little more electronic, Kevin's vocals throughout are highly reminiscent of Bono and work nicely with the music. "Brand New Hit" gets things moving again with a driving bass line serving as the backbone for the entire track. The song is a great blend of the 80's flavor represented on the album, coupled with a much more modern influence. The take pays off nicely and is one of the best sounding tracks on the album. "Yeshua" (or Jesus) shifts the music back to that Smiths/80's vibe for a bit. Kevin sings, "Can you feel all My love? Touch the holes in My side. Can you feel all the love? Yeshua." Up until the title track, the album is completely cohesive in sound, but would it really be a K-Max album without throwing in a curve ball? "AWOL" has a modern rock sound with a 60's and 70's rock flare thrown in as well. It's a really fun song and contains the best lyric on the album. Max declares, "Religion kills, but Jesus saves; it's true," on the track that explores all sorts of problems with organized religion, and describes being AWOL from the way many modern churches are run.

Kevin has always been proud of his Irish hertigage and finally wrote a song about that -- and his temper. "Irish Blood Up" is meant as a fun song, but Kevin continues to express his discontent by singing, "I don't believe in your church. I don't believe in the state. But I believe in the Holy Ghost..." AWOL comes to end with a lullaby of sorts in "Cornucopia of My Soul." The song is the slowest on the album and just has this really "nighty-night" type feel. It's the perfect song for the closer.

I will admit that AWOL did not grab me on the first -- or even second -- listen, but something started to happen at listen three or four. After even more listens, I found myself to be enamored with many of the songs and loving the catchy and fun feel of the entire album. Fans, like Kevin, of 80's new wave will likely love this album from the get-go, but those who aren't so keen on 80's music shouldn't write it off without giving it time to gestate. This reviewer almost made that very same mistake, but thankfully a little diligence paid off and I was rewarded with another fantastic Kevin Max record. Knowing the huge fan of new wave that K-Max is, an album like AWOL was simply only a matter of time. While we enjoy AWOL for the time being, you can't help be curious as to what Kevin is already working on next. Personal tastes have me begging for an album full of songs just like the title track here.

Kevin Max's PledgeMusic campaign album, AWOL, is now out for the general music listening world, and with it we get a melting pot of his influences without ever sounding exactly like a cheap imitation of any one of them. Max has long shared his love of artists like The Smiths, Morrissey, David Bowie, and Duran Duran, and he allows each of his musical heroes to inform the sound of AWOL, producing a heavily drenched 80ï¿½s New Wave vibe.

New Wave is typically not a sound this reviewer gravitates toward, but each revisit of the album drew me further into the story that Kevin was seeking to tell. Max is in fine vocal form as always, his lyrics maintain their poetic essence, and the music is solid. Ultimately, there is superb artisanship from beginning to end on this release. In fact, it bears mentioning that The Smithï¿½s bassist Andy Rourke provides some of the bass lines, which adds to the cohesive sound throughout. Not all songs hit completely, but the ones that do are the empathy soaked ï¿½Melissa,ï¿½ the smoky romanticism of ï¿½Half of The Better One,ï¿½ and the dark, slow burn of ï¿½Eurorail.ï¿½ In addition, other tracks that warrant closer attention are the rock and roll goodness (complete with guitar solo) of title track ï¿½AWOL,ï¿½ the throbbing swagger of ï¿½Irish Blood Up,ï¿½ and the lounge-like meandering of album closer ï¿½Cornucopia of My Soul.ï¿½

AWOL will undoubtedly run away with the hearts of many longtime fans quick to label it his best to date, and although it falls just short of that classification for this reviewer, it is definitely one of his most tightly executed efforts as a solo artist. This is a must-listen for fans, and feels like the album that Max has long been seeking to make. Kevin Max has never sounded better or more focused, and AWOL should be in the conversation for best album of the year. - 6/7/18, Josh Balogh of Jesusfreakhideout.com

Kevin Max's AWOL is a return to the weird and wacky '80s and follows in line with 2016's Playing Games with the Shadow. Some of the songs sound too similar and run together, but the majority manage to distinguish themselves. There's not much new here, but it's a fun listen all the same for lovers of quirky music. - 6/6/18 John Underdown

AWOL finds Kevin Max concocting a blend of 80's English rock and New Wave--both of which have shown up in his music to varying degrees throughout the years. AWOL may take a couple listens to grow on you, but as you spend more time with it, the intricacies of the production (there are some really fantastic baselines throughout) and the beautiful dynamics of Kevin Max's voice draw you in for a continually enjoyable listen. - 6/7/18 Christopher Smith