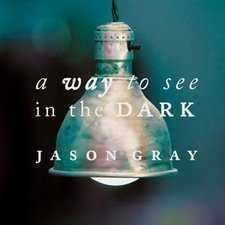 Jason Gray
A Way To See In The Dark

It was once said that writing is a simple thing: "All you do is sit down at the typewriter and open a vein." Tongue-in-cheek as that statement is, there might be truth to it; the greatest art is often born from pain and soul-searching, and that "open vein" approach to songwriting is one of Jason Gray's most endearing qualities. In a decade of music making, from hard-touring indie artist to sharing big venues with TobyMac and Third Day, Gray has proven over again that he's not one to shy away from honesty, both in his songs and from the stage.

After a breakthrough radio hit and the new audience it gained, it would make perfect sense if his third major release A Way to See in the Dark rode out the success a little longer with a batch of radio-friendly songs (plus a few acoustic tunes for the old-school fans). Rather than choose the easy path when it comes to his art, Gray and the team behind his last project, Everything Sad is Coming Untrue, dig deeper to craft some of his most compelling work to date, a record that is, somehow, both singable pop and true to his folk songwriter roots, with lyrics that touch deeper places where fear and hope collide.

A Way to See, like its predecessor, is an album where hooky melodies can thrive alongside intimate storytelling, but one interesting difference is a bigger drum presence, not in the over-produced "Nashville CCM" way, but as an anchor to give the songs texture to show their individual personalities. From the opening aggressive clap-stomp to the slow, pounding beat that carries the final notes away, Paul Mabury's drum work grounds a diverse and current sound. It drives the rowdy Irish pub vibe of "No Thief Like Fear," lets the shimmering anthem "Good to Be Alive" soar, and urges the minimalist piano ballad "Nothing is Wasted" on to a stirring finish. While big drums as a pop staple can be overbearing, fortunately, the work of all the musicians here sets the mood and allows Gray's poignant writing to shine.

The lyrics revisit recurring themes from his past work, taking a special interest in fear and the many ways it undermines our identity as God's beloved. Rather than easy encouragement from someone who has been through the darkness and lived to tell about it, they are dispatches from the shadows between already and not yet, exploring the contrasts of fear and trust, darkness and light.

On the surface, the songwriting can be deceptively simple. "Good to Be Alive," arguably one of his catchiest hooks ever, is built on a chorus of "I wanna live like there's no tomorrow," while "The Sound of Our Breathing" is structured in pure radio-friendly style. But listen closely and there's weighty truth below the surface. Is the point of life to be "well-lived to say 'thank you'"? Is the name of God whispered in every breath of "skeptics and believers" alike? Or, as "Remind Me Who I Am" frankly pleads, "If I'm your beloved / Can you help me believe it?" These questions and the unbelievable truth are woven in and out of all twelve tracks, no matter how singable the hook.

Some of the greatest moments, however, are found in musically simplest. Acoustic ballad "Without Running Away" is a raw look at inner darkness, opening in an image of desperation ("I've spent some days looking for a length of rope / And a place to hang it from the end of my hope."), and ending not with an answer, but with quiet assurance that "after a while in the dark your eyes will adjust / In the shadows you'll find a hand you can trust." Another gem that can't go unmentioned is "I Will Find a Way," a unique and poetic retelling of the Incarnation that might seem out of place among such personal songs, but turns out to be a perfect fit as a reminder that redemption begins with a love story. And finally, the hymn-like "Jesus We Are Grateful" brings everything back around, closing in gratitude to the God who reminds us who we are, beloved orphans welcomed into his family.

Honestly, it's hard to list highlights without just going song by song, as not a single note is wasted in telling the story. A Way to See in the Dark is a complex and beautiful record. Don't be deterred by catchy melodies; this is music too deep to be merely consumed or played in the background. It's a collection of songs to be experienced, contemplated, and shared. A hooky melody can beg to sing along, then a lyrical twist can move to tears. In that balance is Jason Gray's finest work yet and one of 2011's best.

It would make perfect sense for A Way to See in the Dark, Jason Gray's third major studio album, to ride out the success of his sophomore release just a bit longer by delivering a batch of radio friendly songs (plus a few acoustic tunes for the folk-loving fans). This time however, the team behind Everything Sad is Coming Untrue dig deeper to craft some of his best work to date, a record that is, somehow, both more pop-sounding and truer to his folk songwriter roots than ever, with lyrics that touch the deep places where fear and hope collide. Big drum textures and spacious production give the songs room to show their individual personalities, whether in the rowdy Irish pub vibe of "No Thief Like Fear," the shimmering pop anthem "Good to Be Alive," or the minimalist piano ballad "Nothing is Wasted." But of course, the lyrics are where this record shines: introspective, poetic, yet accessible and hopeful songwriting that addresses fear's many forms and the antidote, "childlike faith... my only way to see in the dark..." - Review date: 8/14/11, written by Jen Rose of Jesusfreakhideout.com --->

Is Jason Gray the new Steven Curtis Chapman? With his down home personality and wide open and tuneful song writing, Gray is poised to take the mantle as the next great CCM artist. He seems to be the kind of musician who approaches music and performing seriously as a ministry and who pours himself into every song like it's a Sunday sermon.

His new album A Way To See In The Dark delivers on all those levels, and then some. The opening track and first single, "Remind Me Who I Am," is a melodic slice of rootsy pop/rock with a serious and thought-provoking look at why we stray. The songs suggests that perhaps we sin not so much out of willful rebellion, but because we forget who we are in Christ (This song also has a creative and inspiring video that is available on YouTube.)

In "The Sound Of Our Breathing," Gray riffs on the idea that "Yahweh," the sacred name of God in the Hebrew language of the Old Testament, is also the "sound of breathing" (a similarity many theologians have pointed out). If this is the case, then Gray observes that it's ironic that this name of God is uttered by "doubters, deceivers, skeptics and believers" alike. This is heady stuff lyrically, but it's wedded to a catchy pop rock sound that is broadly appealing and very well done. - Tincan Caldwell, 9/10/11