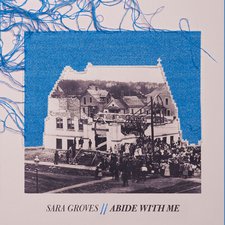 Sara Groves
Abide With Me


Abide With Me is an album filled with history, yet surprisingly future-oriented. This live album was recorded in a church that's about a century old, comprised of hymns that are predominantly the same age. The release of Abide With Me also coincides with Sara Groves' twentieth anniversary of professionally making music. Appropriately, the capstone of this record is a new version of "He's Always Been Faithful," a song that originally appeared on Groves' record label debut and which Groves estimates to have performed upwards of 1,500 times in the years since. That trademark song is a remake, so to speak, of "Great is Thy Faithfulness," but with lyrics that look ahead to God's future faithfulness instead of behind. There's a beautiful connection between this meeting of past and future within the church where the album was recorded, which is shown on the album cover while being built. That building has since been transformed into Art House North, a "creative community for the common good" which was intimately involved with the making of this breathtaking hymns collection.

The new version of "He's Always Been Faithful" is the best thing about this album, a must-have for any fan of Sara Groves. Yet I found, in my experience with this album, that the preceding ten hymns grow increasingly more beautiful and effectual, leading up musically, spiritually, and emotionally to that closing number, all coalescing together to give "Faithful" its power. That being said, I find the first few tracks to be lackluster (specifically, everything leading up to the wonderful title track). Those introductory hymns are, simply enough, boring. The arrangements are nothing special, but I think most of the blame goes to Groves' vocal performances. On "Fairest Lord Jesus" and "Praise to the Lord," she sounds dull, as if she doesn't believe what she's singing; I do believe she does, of course, but it doesn't come across that way. Those vocal takes lack a passion that she later displays on "The Love of God" and "Tis So Sweet." (The latter also benefits greatly from tight three-piece harmonies and a stellar mandolin solo, the record's only moment where the music takes the forefront.) She has never been a bravura performer, but she's always been a tasteful singer. However, most of her fans probably listen to her music first and foremost for her lyrics -- which would give us little reason to hear her sing cover songs if she didn't bring anything fresh to the table. Thankfully, she does.

The best moments of those openings tracks are when Groves' voice is joined by the choir. As mentioned earlier, "community" was a driving force to the making of this record, and this theme affected the sound, as well. The "choir" appearing on Abide With Me is a group of friends and community members from Art House North whose performances were recorded and mixed to sound like they're singing from behind you, within the audience, rather than being up front on stage. This effect works perfectly, immersing you in the atmosphere of a church body, and each time the choir appears is hauntingly beautiful. The midway point on the album, "Song of Blessing," is a short, one-minute verse where the choir sings the whole way through, making for an extra special treat.

"To The Dawn" and "Lead On Oh King Eternal" are two fantastic sets of lyrics that might be unfamiliar to most listeners (myself included), given new arrangements that shine. "What a Friend," with its muted drums, is another standout, emphasizing one of the record's greatest themes: the friendship of God. It's easy to think of Jesus as our friend -- which is surely an incredible truth! -- but we too easily forget that, through Jesus, we get to have an intimate friendship with the entire triune God. This is but one of the many convicting and comforting truths given focus by Groves, the musicians, her collaborators, and her husband Troy, who came up with the idea of a hymns album fifteen years ago and had been compiling a list of potential songs to use ever since.

Again, it's hard to compare Abide With Me to the rest of Groves' discography because we'd be comparing an album where she wrote close to none of the lyrics to the work of one of Christian music's finest lyricists. Thankfully, this album is also a completely different project than anything she's done before, a worshipful and encouraging accomplishment that all of her fans will want to pick up while we await a proper follow-up to Floodplain (which, for the record, has become one of my favorite albums of all time). Here's to another twenty years!

With Abide With Me, listeners are treated to eleven very simple arrangements of mostly well-known hymns with ever-so-slight nods to country music in sound. Sara Groves' gentle take on "Fairest Lord Jesus" is the first that captures attention with its soft vocals and subdued guitar picking. The next track is "Praise to the Lord," and as personal fan of the song, there were high expectations for her treatment of it. Unfortunately, it does little to stand out, and borders on forgettable. It is not bad by any stretch; it is just lacking passion vocally, and is borderline boring musically. Thankfully, this is not a prevalent problem across the album, with only brief moments within "Fairest Lord Jesus" also falling into this camp as well. "Abide with Me," the title track, picks things back up nicely as the one that I was not previously familiar with but has become a favorite from the record. Particularly moving is the stanza, "Thou on my head in early youth didst smile/And though rebellious and perverse meanwhile/Thou hast not left me, oft as I left Thee/On to the close/ Lord, abide with me." Another noteworthy song included in the track list is "To the Dawn." Beginning with tender piano and strings, it perfectly sets up the subdued guitar, percussion, and harmonies to come, none overshadowing the lyrics. Perhaps the most upbeat moment comes by way of "Tis So Sweet," which would have worked as a fantastic opening to the album; nevertheless, it works to change the tempo here, keeping things from getting too sleepy. The song with the most Sara Groves influence on it is closer "He's Always Been Faithful," which is also the song she has been playing the longest in concert. She puts just the right amount of musical spin on hymn "Great is Thy Faithfulness" to not completely lose the sentiment of the original but turn the focus on both God's past and future faithfulness. It is a great way to end the album, and a true highlight in concert should you ever take in one of her live shows. Overall, a somewhat subdued album, it plays perfectly as comforting background music and will remind many listeners of their upbringing. Though the first couple of listens may not leave much of an impression, this one will grow on you, bring a smile to your face, and remind you of home. - Review date: 11/20/17, Josh Balogh of Jesusfreakhideout.com

Sparse, simple, and straightforward, Sara Groves doesn't seem to really make a big effort to add her own unique flair to the hymns and classic songs she covers on Abide With Me. Frankly, the first few listens were downright boring to me. But like any Sara Groves album, it certainly gets better and better with repeat listens, as listeners discover more depth and subtleties in the musical arrangements themselves. Standouts like the title track or "To The Dawn" also make the album very worthwhile. It still is a bit disappointing in light of the amazing and unique hymn albums and hymn covers in recent memory that Groves went the simple route instead, but in a lot of ways, that makes it more true to her own style than any other route she could have gone. - 11/17/17, Mark Rice of Jesusfreakhideout.com