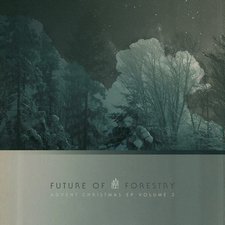 The Christian canon places much focus on tradition, and surely among the most favorite of traditions is Christmas music. Musicians like Eric Owyoung seem to recognize that reality, and his evolving musical project Future of Forestry has formed a Christmas music tradition of its own. With Advent Christmas EP released in 2008 and its sequel two years later, FOF has developed its own tradition of Christmas music through these EPs, and Volume 3 has arrived. Every EP follows the other for a consistent musical flow, and Volume 3 is no exception.

In line with the first two installments, Volume 3 boasts several Christmas favorites with an orchestral and traditional flair with plenty of modern elements that make the music truly unique to FOF's style. "Silent Night" unassumingly opens the EP, slowly building up the ambience with a simple synth and piano strokes to set the tone. While the track aligns itself well with the "silent" theme of the track, it lacks the punch of the other volumes' openers "O Come O Come Emmanuel" and "Joy to the World," both of which used a good amount of time to start the EP strongly. Still, it sets the minimalist theme of Volume 3 well, as "Jesu Joy of Man's Desiring" adds in strings, bells, and drums to rejuvenate the old classic.

Appropriately, "Carol of the Bells" majors on bells to convey the atmosphere of the track, and Owyoung's vocal layers add to the choir effect. Adding the drum machine in the background, "Carol of the Bells" is a highlight of the EP that showcases Future of Forestry's expanded musical concept. "O Come All Ye Faithful" seems to mix the styles of "Joy to the World" and "O Come O Come Emmanuel" with thumping drums and an impressive ramp-up to liven the initially dreary beginning. Still, Owyoung's soaring vocals give the track a greater urgency, and the song concludes triumphantly and fittingly to the season. The Austrian carol "Still Still Still" concludes the five-track set, granting the listener with a unique take on a lesser known lullaby. Appropriately, the number uses xylophones, strings, and harp to give the listener a calming presence. And as the listener reflects on the EP they just heard, the music feels consistent when together, even if there is never a hard-hitting new take on a favorite. There is a reason that Future of Forestry still performs Christmastime tours on a regular basis, and Volume 3 only affirms why Owyoung and his friends continue in this theme.

With such a pedigree behind them, Future of Forestry knows how to perform Christmas music, and this reputation continues strongly for Volume 3. While perhaps not quite as memorable as prior installments, Advent Christmas EP, Volume 3 expands FOF's offerings of the season to some less recognized classics ("Jesu Joy of Man's Desiring" and "Still Still Still," specifically) while also capitalizing on the impressive grand style that fans have enjoyed year after year. Future of Forestry continues to be a reliable source of Christmas music tradition, and Volume 3 is a solid set for this season's new music.