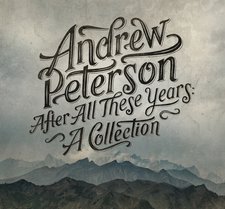 Andrew Peterson
After All These Years: A Collection

Andrew Peterson is a busy man. On top of writing the fantastic Wingfeather Saga novels (with the fourth and final book out this past spring), recording and touring, he is also a well documented family man and host to a successful annual Christmas tour. With After All These Years, Peterson has stopped to take a breath and offer up a retrospective of his work over the last 14 years or so.

It's a fascinating thing to hear an artist mature, and over the course of the twenty songs on Years, you can hear Peterson refine his sound sonically. But his lyrics have always been older than his years would let on. Early works "Nothing To Say," "After The Last Tear Falls" and "The Silence Of God" show Peterson as a young man with a lot of weight on his heart and soul. All three songs are re-recorded here; as are many of his earlier songs on Years, but the heavy themes have more in common with the writers Philip Yancey and C.S. Lewis than most fare offered up by Peterson's musical peers.

Peterson's fantasy bent is best shown in "The Far Country" and "The Reckoning," two songs that reach for the world beyond this one, the one beyond this 'far country' that is not our home. Both songs up the tempo and sonics from Peterson's early, folky work, and feel weighty in the way that Rich Mullins songs did. Consider this couplet from "Far Country:" "I can see in the strip malls and the phone calls / the flaming swords of Eden / in the fast cash and the news flash / and the horn blast of war / in the sin-fraught cities of the dying and the dead / like steel-wrought graveyards where the wicked never rest / to the high and lonely mountain in the groaning wilderness / we ache for what is lost / and wait for the holy God." The poetic depth of Peterson's lyrics are some of the finest in Christian music.

But it was on Light For The Lost Boy, Peterson's previous album (#5 on JFH's end of the year best album list that year) that the heft of the lyrics were matched with a near-perfect sonic pallet. "Don't You Want To Thank Someone" is a near-nine-minute epic that echoes along on a shadowy guitar figure and finds Peterson musing on the wonders and perils of life, and the gracious God that unites it all; "Don't you ever wonder why / in spite of all that's wrong here / there's still so much that goes so right / and beauty abounds? / 'Cause sometimes when you walk outside / the air is full of song here / the thunder rolls and the baby sighs / and the rain comes down." Peterson's lyrics here echo the book of Ecclesiastes and its question of "what is it all for?" To unite such deep themes and soaring music is a hallmark of Peterson's work.

The new songs offered up for this collection take a decidedly lighter approach. Peterson muses about how some things never change in "After All These Years," and sings a heartfelt ode to his hometown of Nashville in "Everybody's Got A Song." In "To All The Poets," Peterson thanks his heroes for "taking their sorrow and using it to light the world / so I could know that I'm not alone." There are many that could thank Andrew Peterson for doing the same thing for them, and After All These Years is a fine, fine document of a poet's journey through the wild wilderness of this life to that far distant shore He is calling us to.

Andrew Peterson's 15-year career has built an impressive legacy: eight albums, a series of fantasy novels, a beloved annual Christmas tour, and the founding of a successful online arts community and conference. And with that history in mind, After All These Years: A Collection, is a perfect way to celebrate. This isn't a label-made "greatest hits" album in the traditional sense, but rather a celebration of what's gone before and a sort of love letter to his dedicated fans. Containing four brand new songs, eight re-recorded classics, and a number of fan favorites, there's bound to be something for longtime listeners and newcomers alike.

"All These Years," one of the new songs, opens the album with a confession: "Well after all these years I would've thought that all my fears were laid to rest / But I still get scared..." Peterson's disarming honesty and lyrical poetry have long endeared him to his fans, and those traits are on full display here, reflecting on how far he's come. Two other new songs are a tribute to the artists who have impacted his life ("To All the Poets") and the city of Nashville ("Everybody's Got a Song").

Re-recorded versions of older songs reveal another dimension to his earliest work, whether in giving "After the Last Tear Falls" a stirring pop vibe or slowing "Isn't It Love" down to a more reflective pace. In many ways, these new versions actually improve on the originals. Peterson's voice and musical style have matured over the years, but the songs themselves have aged well enough to sound brand new with their updated treatment. The remaining playlist samples widely from his catalog, including fan favorites like "Don't You Want to Thank Someone," "The Silence of God," and a powerful live take on "High Noon."

After All These Years features a lot of great material, so much that the full tracklist wouldn't even fit on one disc. ("High Noon" and "Everybody's Got a Song" are only available on the digital version.) Longtime fans will find it worth picking up for the excellent new and re-imagined songs, but for the newcomers, it's the perfect place to start discovering this treasured songwriter's work. - Review date: 11/9/14, Jen Rose

There was a time when compilation albums were works of art in and of themselves. They were an opportunity for an artist to collect their defining musical moments along with appropriate and reflective new songs to tie things together, resulting in a fond and heartfelt walk down memory lane (such as Rich Mullins' Songs, dc Talk's Intermission, or Jars of Clay's recently-released 20). Often unheralded in the industry as a result of him bucking tried and tested trends in favor of intimate artistry, Andrew Peterson has earned the opportunity to look back on his stellar career. Armed with four new songs, six original recordings and eight re-recorded songs, After All These Years places itself among those special compilations. From the opening strums of the title track to the closing notes of "To All The Poets," Peterson takes us on a nostalgic and personal walk that will be endearing to any longtime fan, and enthrall new ones. - 11/10/14, Mark Rice of Jesusfreakhideout.com