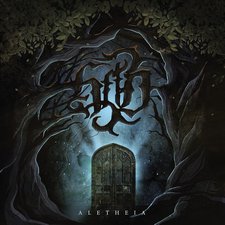 Hope For The Dying
Aletheia

Judging by the name, you might assume that Hope For The Dying is your stereotypical metal band. However, until you listen to the new album, it's hard to explain the details that set this four piece band apart as they drop their second full length album, Aletheia, courtesy of Facedown Records. Fast, furious, and heavy are all definite and to be expected, but Hope For Dying manage to stand out among the rest of today's overpopulated metal scene.

"Acceptance" opens the album with a soft, acoustic, almost Latin vibe, setting the stage for some of the most proficient guitars I've ever heard. The speed and pristine technically-sound fingers stand out immediately, and then you get hit with throat shredding growls and outstanding pounding on the drums. The combination heard here is found throughout most of the album, a melding of today's hardcore sound with yesterday's classic metal vibe; the mixture of the two is epic. Heavy screams and clean vocals carry through the whole album, with growls of "the reformation has begun" demanding listeners' attention, while choruses of "we stand in our delusions, we rest in our denial, who will rise?" beg to be sung along to. Each song follows the mix of classic metal and modern hardcore, and for the most part, it sounds very similar to the previous track without much variance in sound. A few tracks stretch to ten minutes in length, which really drags them out, and I found myself hitting the skip button somewhere around the five minute mark a few times.

The lyrical content is very spiritually driven, speaking of those who regrettably play church in "Impostors," and "In Isolation" reminds us of the fact that even in our hardest times, God is always with us. The nine-track listing is short (especially since you have to factor in an instrumental track and "Serenity," which is basically an interlude), despite some songs being overly long. But all in all, if you're looking for a nice change of pace from your everyday metal, this is it. These guys scream with the best, can shred on any stage, and the double bass is supreme. Even with its minor flaws, Hope For The Dying's Aletheia will be an album to be sought after by most of the hardcore scene.

Hope For the Dying stepped out and gave the metal world something truly different in 2011 with their Facedown Records debut, Dissimulation. Their second effort, Aletheia (a Greek word meaning disclosure or truth), is a step in a different direction without really taking a foot off of the path in front of them. HFTD stepped away from the orchestral masterpiece that tied Dissimulation together from beginning to end, and went with more accented strings instead. The song "Visions" even features brass instrumentation and almost feels like something out of the next Marvel Comics movie. Some may call them progressive and others will say technical, while some will claim old-school and others will say it's completely new and fresh. The truth is, HFTD draws influence from bands like Queensryche and All That Remains with so many others mixed in, creating their very own niche in the metal scene. Aletheia's nine tracks actually clock in at almost nine minutes longer than Dissimulation's eleven tracks. At times, the songs can get a little lengthy, but it's really hard to call it a detractor when the instrumentation is so flawless. Overall, Aletheia is a small step below Dissimulation as a whole. The guys didn't want to record a repeat of their debut and succeeded in making something new and different. If you have passed Hope For the Dying up until now, Aletheia is definitely worth your time. It may not be the ideal album for putting on and cruising, but it is over one hour of musical brilliance. - Michael Weaver, 3/22/13