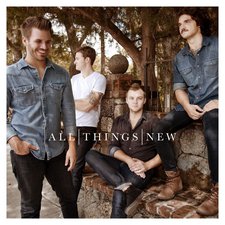 In the human experience, broken people coming together to create something redemptive is absolutely revolutionary, and thankfully, Christ has been in the business of making something from nothing for millenniums. Newcomers to BEC Recordings, All Things New is just another example of this powerful concept; with heartbreaking stories of their own, four guys combine their talents for their band's self-titled debut, even if it's just a modest start.

Right from the first track, "Washed Over Me," All Things New showcases a southern-influenced pop sound. While "Washed Over Me" is the most upbeat track of the bunch, it sets the right tone for the record in that it aims for broad overlays of charm and authenticity with collegiate enthusiasm. The album's far-and-away finest moment, however, is in "Keep Me In My Knees"; as the song slowly crescendos, lead singer Garrett Hornbuckle pleads for God to make meaning of suffering ("through the struggle I still believe you are holy/if this is what I need, then keep me on my knees"). While no one track is particularly insightful in its theology or depth, the album illustrates humble truths in an easily digestible fashion.

With these positives in the open, however, All Things New critically lacks in numerous areas. Whether intended or not, the entire album is plastered with a manufactured approach to southern pop that feels almost too polished for its anticipated effect (think NEEDTOBREATHE with all the edges sanded off). Obviously aiming for Christian radio, this approach leads to a disappointingly uninteresting sound for ten straight tracks that sadly run together, begging for greater risks to be taken. Too many melodies just aren't captivating, either, and tracks such as "In Your Reach," "Holding On," "Greater Things," and "Use Me" are sadly forgettable in the project's grand scheme. Even individual elements of some tracks just don't quite land correctly, like the "ohhs" nearly cloned from Sanctus Real's "Forgiven" on "Lead Me In," or the unconvincing gang vocals on "Holding On" (that bands like House of Heroes have perfected years ago). "New Man," in particular, is featured as the paint-by-number radio single complete with soaring vocals and string-led instrumentation that doesn't necessarily fit well with the album's entirety.

Combining simple truths and simple instrumentation, the album doesn't make for the deepest of listens, and unfortunately, that has a lasting impact on All Things New's overall appeal. While a very young band, both in age and in tenure, the quartet has plenty of time to complete and define their sound (and plenty of life stories to tell their listeners in the process), and hopefully chart and touring successes can unlock more creative freedom in the near future. For now, however, All Things New still need quite a bit of artistic growth, and they severely sell themselves short with a sorely unexciting debut.